The highly-ranked mechanical engineering department at the University of Colorado Boulder is being named after Colorado philanthropist and businessman Paul M. Rady, thanks to his generous support of the college. 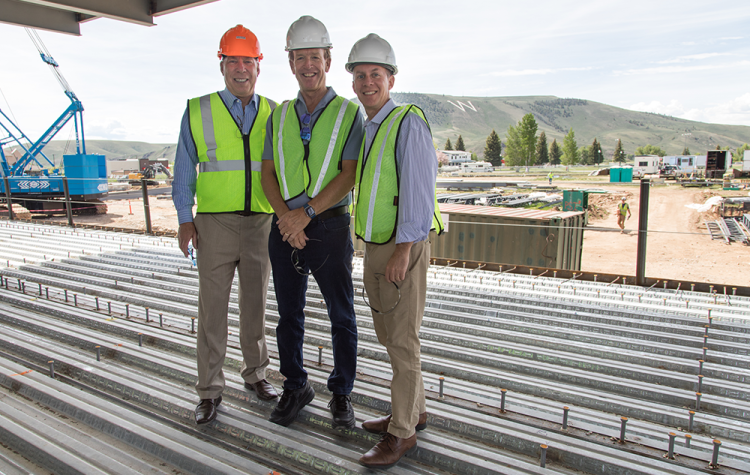 “Paul Rady is a man of vision, integrity, grit and accomplishment whose dedication to growing a 21st century economy across the state of Colorado is second-to-none,” Bobby Braun, outgoing dean of the College of Engineering and Applied Science, said. “His philanthropy, which includes the largest capital gift in CU Engineering history, is fueling our growth and reach across the state.”

Braun added that the mechanical engineering department is a department “very much on the rise.”

“This gift and associated naming will usher in further growth of its impactful research and educational mission,” Braun added.

Rady, co-founder of Colorado-based Antero Resources, said he was honored “to be recognized by CU Boulder in this way and proud of CU Engineering’s contributions across the state of Colorado.”

“I’m excited about growing the new partnership between CU Engineering and Western Colorado University,” Rady said. “This collaboration will return dividends for our state’s economy and improve the quality of life of its citizens.”

The mechanical engineering department at CU Boulder is now ranked No. 15 for undergraduate education and No. 18 for graduate education in the nation among public universities’ mechanical engineering programs. In the fall, the College of Engineering and Applied Science welcomed its most diverse and qualified first-year class, with 45% women and 25% underrepresented minorities, matching Colorado’s demographics.

The department is also one of the largest departments in the college and has strength in many areas including materials, thermos/fluids, controls and mechanics. Groundbreaking research by mechanical engineering faculty has applications in human health, security, energy and environment, air quality, quantum devices and robotics. Students in mechanical engineering are prepared for their careers through hands-on, active learning and real-world problem-solving throughout their education.

This naming is a major milestone for a department that is poised for continued growth and national recognition, department Chair Mike Hannigan said.

“Being recognized as a named department will allow us to share more broadly how we as a top-ranked mechanical engineering program excel in areas such as project-based learning, high-impact research, and outreach and partnership efforts across Colorado and beyond,” Hannigan said. “It shows broad level support for the department and our many groundbreaking initiatives.”

Rady has been a vital force in building the engineering partnership program between Western Colorado University and CU Boulder. This gift will accelerate that program which welcomed more than 40 students this year, its first academic year. The partnership program is expected to house more than 200 mechanical engineering and computer science students by fall 2021. While earning a CU Boulder engineering degree, these students complete their educational program on the Western Colorado University campus in Gunnison.

"We've been fortunate to partner with Paul and our colleagues at Western Colorado University. This close partnership is expanding our capacity to provide a high-quality engineering education to every student in the state who wants one," said Keith Molenaar, interim dean of the College of Engineering and Applied Science. "Through this partnership, we can meet the growing demand for rigorously trained, well-rounded engineering professionals who will contribute to strengthening our state and nation's economy, security and quality of life."

In the last three years, due to the generosity of philanthropists like Rady, Colorado industry, and others across the CU family, the College of Engineering and Applied Science has raised more than $100 million, named two departments, completed construction and met fundraising goals for a new aerospace building, increased scholarship dollars by 67%, increased endowment by 30% and increased the number of faculty endowments by 25%.

There will be a formal event commemorating the naming later this year.

Mr. Rady has a long and distinguished career in the oil and gas industry and has always been based in Denver. Mr. Rady began his career with Amoco where he worked 10 years as a geologist focused on the Rockies and Mid-Continent. After 10 years at Amoco, Mr. Rady was recruited into Barrett Resources as Chief Geologist. He rose through the ranks and ultimately became CEO. In 1998, Mr. Rady joined Pennaco Energy as Chairman and CEO until its sale to Marathon in 2001.

He then co-founded Antero Resources in 2002. The Antero family of companies now has an enterprise value of over $10 billion.

In September 2018, Mr. Rady made an $80 million gift establishing the Paul M. Rady School of Computer Science and Engineering at his alma mater, Western Colorado University. The gift represents the largest gift in university history and one of the largest financial donations ever to a public university in the state. The Rady School will offer undergraduate degrees in computer science and mechanical engineering granted by the University of Colorado Boulder in a cooperative program with their College of Engineering and Applied Science.

Previously, Mr. Rady had donated $1 million in 2001 to establish an Endowed Chair in Petroleum Geology at Western. At the time, it was the largest cash gift in university history and the first million-dollar gift received by Western’s Foundation. It enabled Western to create a new curriculum for petroleum geology and to hire energy industry leaders to teach courses. Mr. Rady supplemented his Endowed Chair in Petroleum Geology endowment with an additional gift of $1.5 million in 2014. Mr. Rady has also established the Paul M. Rady Endowed Chair at CU Boulder’s top-ranked geological sciences department.

Mr. Rady, along with his wife Katy, also have been involved with, and supportive of, the CU Anschutz Medical Center, the University of Colorado Hospital, the Children’s Hospital of Colorado and Chinese Children Adoption International.

The mechanical engineering department's over 1,200 students and 64 faculty form an innovative and nurturing community in the foothills of the Rocky Mountains. Students work together to learn the fundamentals of the field and engage in rigorous, team-based experiences addressing real-world problems. That dedication to professional development extends beyond graduation, with an alumni network of more than 5,000 professionals of which more than 200 volunteer with the department annually. The department’s award-winning faculty tackle societal challenges through technological innovation impacting the environment, security and human health.

About the Western Colorado University and CU Boulder Engineering partnership

With the largest gift in university history and one of the largest financial donations ever to a public university in the state of Colorado, Western Colorado University announced in 2019 the establishment of the Paul M. Rady School of Computer Science and Engineering.

The new school is made possible by an $80 million gift from Paul M. Rady, chief executive officer and chairman of the board of Colorado-based Antero Resources and Antero Midstream. Mr. Rady is a 1978 graduate of Western Colorado University with a bachelor’s degree in geology.