Election to the prestigious academy is among the highest professional distinctions bestowed upon an engineer. Academy membership honors those who have made outstanding contributions to engineering research, practice or education, which might include the pioneering of new and developing fields of technology, making major advancements in traditional engineering fields or developing innovative approaches to engineering education.

Axelrad's election was announced earlier this year. She was officially inducted in a ceremony in Washington, D.C. on Sunday.

“Our faculty and alumni are improving every facet of our society through their contributions to the field, and we are proud that their accomplishments have been recognized at the highest level,” said Bobby Braun, dean of the College of Engineering and Applied Science and an NAE member. “Professor Axelrad has built her career at CU Boulder and has been a leader in shaping the aerospace community across our campus, state and nation. Her research has significantly advanced the science and utility of GPS, a technology we all use daily.”

The NAE highlighted Axelrad’s work on analysis of multipath GPS signals to improve satellite navigation and new approaches to remote sensing in making the election.

Axelrad is the Joseph T. Negler Professor and immediate past chair of the Smead Department of Aerospace Engineering Sciences. Since joining CU Boulder in 1992, she has distinguished herself through her commitment to high-quality research, dedication to education, and extensive service and leadership.

She’s been deeply involved in the vision for the college’s new $100M aerospace engineering building and helped to organize the multi-university Women in Aerospace Symposium on our campus in 2017. Axelrad was recently awarded a grant from the U.S. Air Force Research Laboratory related to position, navigation and timing challenges in small spacecraft and she currently leads a Department of Education GAANN (Graduate Assistance in Areas of National Need) program focused on growing the representation of women and underrepresented minority students in the aerospace field.

Axelrad earned her PhD in Aeronautics and Astronautics in 1991 from Stanford and joined the faculty of University of Colorado Boulder’s Department of Aerospace Engineering Sciences in 1992. She served as chair of the department from 2012–17, where she oversaw a major expansion of department programs, industry partnerships and opportunities for students.

Axelrad is the 12th active faculty member, and 22nd overall, in the College of Engineering and Applied Science to be elected to the National Academy of Engineering.

In addition to Axelrad, CU alumnus Dereje Agonafer (AeroEngr ’72) was elected. Agonafer is an emeritus member of the college Engineering Advisory Council and received the college’s Distinguished Engineering Alumni Award in 1998. He is presently a professor in mechanical and aerospace engineering at the University of Texas Arlington. 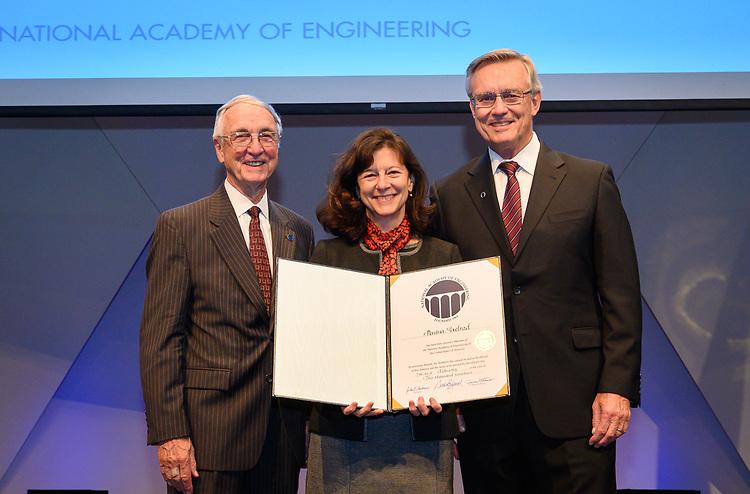 Axelrad being recognized at NAE.

Reception at 6:30 p.m., with heavy appetizers

To celebrate her induction into the National Academy of Engineering, Penina Axelrad will share highlights from her research group's journey so far, including recent advances in space situational awareness for large-scale CubeSat deployments, GPS multipath modeling and positioning in complex environments, and GPS-based bistatic radar altimetry.

Axelrad's talk is part of Research and Innovation Week on campus. It includes special seminars, TED-style talks, facility tours, and and more. Check out the full calendar.

Faculty in the National Academies