Watch all of the archived team presentations at Livestream.com

In addition to CU Boulder, the team included students at Harvard and Cornell Universities, industry support, as well as a faculty advisor at the University of Hawaii at Manoa. 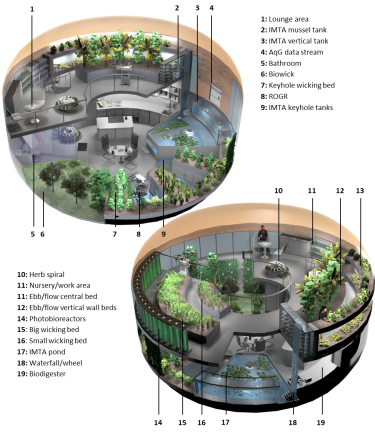 NASA has presented a University of Colorado Boulder team with the 2019 Most Innovative Award for their project in the space agency's BIG Idea Challenge.

CU Boulder was a finalist at the event, which was held April 23-24 in Hampton, Virginia. The competition, which changes each year, called for innovative ideas for the design and operation of a Mars greenhouse.

The team's project, titled Sustainable Integration of Regenerative Outer-space Nature & Agriculture, or SIRONA, is both a human habitat and vertically integrated agricultural ecosystem to grow and harvest food and then recycle the resulting waste.

While NASA envisioned the greenhouse as primarily just a workspace for growing food, the team saw an opportunity to go further.

“This is about more than just producing food to keep people alive. What do we need to do so the astronauts will also be happy?” said Kyri Baker, an assistant professor in the Department of Civil, Environmental and Architectural Engineering and the team faculty advisor.

“BLiSS is a specific acronym that embraces the concept that nature improves the health and well-being of the crew. It embodies the intangible benefits of integrating nature into the habitat,” said Hava. “To implement this, the layout is designed to mimic the feel of an outdoor garden or park; this provides a familiar Earth environment that promotes well-being, crew cohesion, relaxation and recreation.”

Additionally, SIRONA can be used as an emergency secondary habitat in case of catastrophic failure of the primary living quarters. SIRONA includes all of the subsystems necessary to function as a habitat, including a bathroom, kitchen, and emergency deployable sleeping quarters that are stowed during normal greenhouse operations.

“It’s a huge integration challenge,” said Hava. “Systems-level thinking for this kind of design is super important. We have to manage human and crop nutrients, water, waste, power, lighting, crew time and a lot of other things that you wouldn’t worry as much about on Earth. For example, tracking how much oxygen does this plant produce and how much CO2 does it absorb?”

In addition, the team is also working to ensure the greenhouse avoids being a significant maintenance commitment for astronauts, who likely would rather focus on exploring the Martian environment.

“There are lots of tasks astronauts don’t have time to do when they’re focusing on research, so automation is important. The greenhouse includes several types of automation to manage plant care tasks, among other unique features” said Baker.

Hava sums it up simply: “They’re not there to be farmers. However, we still want them to have the joy of fresh food and access to nature in an otherwise sterile machine environment of the typical space habitat.”

Five universities advanced to the BIG Idea Challenge championship, and CU Boulder was the only one that sent an all-woman team.

“We were the only all-woman team this year and in the history of the BIG Idea Competition,” said Hava. “It wasn’t intentional. In the beginning, I reached out to people I knew who would be good for the project, and one day we looked around the room and realized we were all women.”

“It’s been nice to see how the students look at the design problems from differing perspectives. My background is in power systems, and that was my first question: Where is the power coming from? For some of the students, their first thought was, ‘What are the astronauts going to eat?’”

Food production capacity, equipment mass and power were all fully accounted for in the final plan, which outlines a litany of specific crops and fish as part of the overall system and tracks electricity use down to the last watt, with room to spare, something Baker points out is an important consideration.

“You can’t have power needs be too tight. What if equipment gets less efficient as it gets older and starts drawing more electricity? Rated power also has some uncertainty; something may say it uses 700 watts, but there’s a range,” Baker said.

The goal of the competition was to bring fresh ideas to NASA, as students often tackle issues in ways that longer-tenured engineers would not necessarily consider. It is an issue Hava has seen first-hand in her PhD research.

“The current architecture for space habitats keeps plant growth chambers and human living areas completely separate,” Hava said. “I think that’s a flawed approach. You lose a lot of the benefit to astronaut health and well-being by separating them from the plants; we’ve intentionally designed our system to integrate the human and plant living systems into a symbiotic ecosystem.”

Read more about the BIG Idea Challenge at NASA.