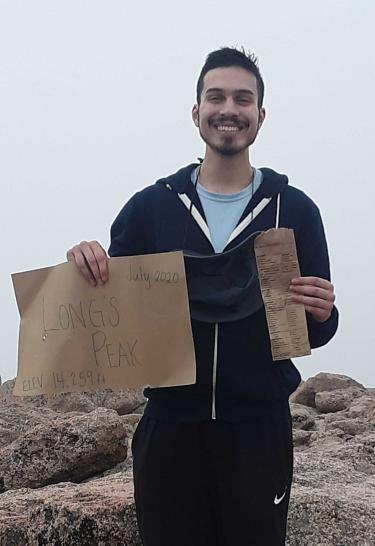 Matthew Strong is a recipient of the College of Engineering and Applied Science 2021 Research Award, recognizing students with demonstrated excellence in research.

As an undergraduate, Strong served as a research assistant on several projects in the SBS Lab and the Human Interaction and RObotics (HIRO) Group. His research so far has focused on robotic manipulators, machine learning and reinforcement learning, with a special emphasis on tactile sensing for human-robot collaboration.

"I never expected to join research, but I really enjoy it now because we get the ability to craft our own ideas that no one's ever thought of," Strong said. "You get to let the 'kid' in you run loose."

Following his curiosity led to success, as Strong published an article to the Science and Technology for the Built Environment journal and has two more conference papers under review at the International Conference on Intelligent Robots and Systems 2021 for publication, and is working on a journal submission for GANs and building energy simulation.

Despite the accolades, Strong said the thing he's enjoyed most about getting into research projects is working with new people from diverse backgrounds.

"I've been fortunate to work with folks from places such as China, Japan, Spain, Italy, Taiwan, and India and hear about their unique perspectives," he said. "In fact, I decided to minor in Mandarin Chinese because quite a few of my collaborators speak it. I'm nowhere near being fluent, but it's one of my goals in the next several years to be fluent in Mandarin."

What is your favorite memory from your time at CU Boulder?

I don't have one favorite memory, but rather multiple moments.

I'd say that my favorite moments were the times when I played basketball with my friends (pre-COVID) on Friday nights at the rec center after our classes. I can't pick out a certain Friday as the best one, but on some Fridays, we were all in the zone: my other friends were making shot after shot, good pass after good pass, and I was grabbing 10+ rebounds a game and completely locking down the other team's best player. One of my mentors from research would also play with us, and there were times where we were having a great time, and all of our stresses would go away.

What accomplishment are you most proud of, either academically or personally?

I'm most proud of receiving the honorable mention for the CRA Outstanding Undergraduate Researcher Award 2021. Only a handful of CU Boulder students have received recognition in the past 20 years. I was surprised that I received the honor, but it really demonstrated to me that having a great advisor and mentors around me is crucial for success. I'm truly grateful for the very honest feedback they gave me. 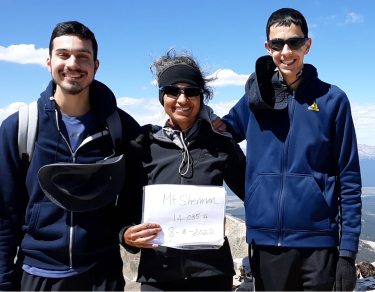 Matthew Strong with his mom and brother atop Mount Sherman.

What is your plan for after graduation?

After graduating, I'll be working at Microsoft (starting September) on the customer experience platform as a software engineer, with an emphasis on machine learning and reinforcement learning. In the near future, I'll be applying for a PhD in robotics. Before September, though, I'll be going up as many 14ers as possible.

I feel like I really hit my stride after participating at HackCU (CU's biggest hackathon), in 2018. My friends and I, who were freshmen at the time, were surrounded by so many brilliant people during the hackathon, but we ended up not finishing our project (we gave up around 5 a.m.) However, from seeing what my peers had done, I was inspired to really immerse myself into computer science. I consider that my "turning point" as a CS student because it really exposed me to all the things you can do outside of the classroom.

What was the biggest challenge for you during your engineering education? What did you learn from it?

The "science" in computer science has been my biggest challenge. So much of my work is backed by science and math. I've often found myself throwing stuff at the wall to see what works and what doesn't, and I've learned (and still am learning) to always start with the fundamentals first.

What is your biggest piece of advice for incoming engineering students?

Get consistent exercise. Exercise has been the one thing that has kept me both mentally and physically in shape.