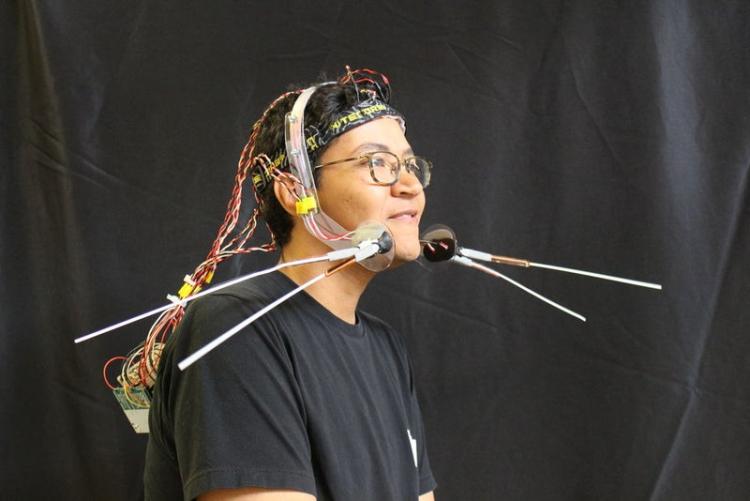 Hill wears prototype cat whiskers in photos for an Instructables project he created to share his device.

Senior computer science major Chris Hill recently became part of the first cohort of Google’s CS Research Mentorship Program, through which he’ll be paired with a researcher at one of the world’s top tech companies.

But it’s not his first experience with mentorship. In fact, he said he met his “mentors for life” a few years ago when he took discrete mathematics with Professor Mike Eisenberg, who passed away in March.

Eisenberg mentioned he was planning to teach a first-year seminar about human augmentation. Hill had enjoyed having Eisenberg as a professor, and decided to give the class a try.

“The really neat thing about that class was that it was his first time learning about the material as well, so it felt like a very good environment where both of us were learning and throwing around different ideas,” Hill said.

One day, Eisenberg asked Hill to come by his office to discuss an essay. Hill said he immediately imagined the worst, but it turned out that Eisenberg wanted to invite him to join the Craft Technology Lab, led by Eisenberg and his wife, Ann Eisenberg.

Since then, Hill has worked in the lab with Ann Eisenberg as his mentor, exploring human augmentation, sensory extension and trans-humanism. He’s built things like wearable cat whiskers and a glove that give the wearer the experience of having foot-long fingers.

“Trans-humanists believes that the next step in human evolution will be manmade,” he said. “With the whiskers, we’re sort of adding a sixth sense that humans don’t have in a form factor that evolutionarily wasn’t useful to us.”

Hill’s work has also gone in new directions through some collaborations with Assistant Professor Ben Shapiro’s Laboratory for Playful Computation, where many of their projects involve applications of computer science in education. His next project will be on sensory extensions that allow students to feel scientific phenomena.

“There is a group of students that have difficulty understanding or verbalizing intangible concepts,” Hill said. “What I hope to do with my devices is apply them in some way to gain a common language. So maybe they wouldn’t know to say that there’s a cohesion in molecules that create tension in water, but they’ll be able to wear an extension and describe it in their own terms.”

“I can’t wait to see what Chris comes up with next,” Shapiro said.

Doing Research as an Undergrad
Research isn’t just for graduate students! CU Boulder offers a host of programs to help you find a faculty mentor and get involved in research projects. Learn More
Hill said he was a little surprised to be chosen for the Google program, since it seemed like they were looking for people focused on machine learning or artificial intelligence. But he looks forward to the chance to travel to Silicon Valley and develop a yearlong project with his Google mentor.

“If it goes well, I can go back to that mentor and start new collaborations,” said Hill, who plans to continue as a researcher after he graduates in May. He hopes to pursue his PhD with Ann Eisenberg as his advisor, and then continue in academia or a corporate research lab.

His advice for students trying to find a mentor is just to start reaching out to people whose work interests them.

“Now is not the time to be shy, especially if you’re trying to develop a skill or develop a resume,” Hill said. “You really just have to throw yourself out there. The noes hurt now, but better now than later in your career.”

Hill would like to thank Ann Eisenberg of the Craft Technology Lab and Ben Shapiro of the Laboratory for Playful Computation for their ongoing support and for nominating him for the Google mentorship program.