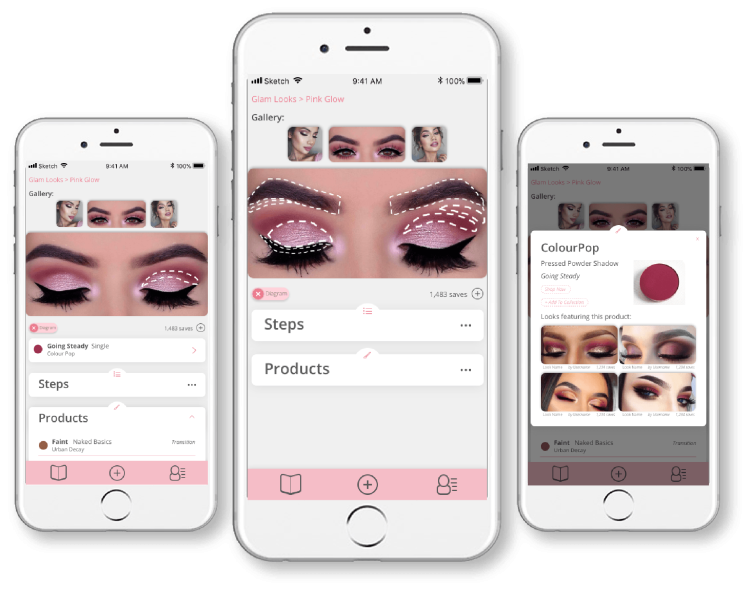 Update: Congratulations to BeautiBook on their third-place win at the NVC!

For many people, makeup is more than a daily routine – it’s an art form. To help aspiring makeup artists, senior computer science majors Deekshitha Thumma and Rachel Platt have designed an app for sharing, organizing and discovering new makeup looks.

Thumma said the idea for BeautiBook – which is headed to the finals of the New Venture Challenge this week – began with her own experiments with makeup. To increase her skills, she set a challenge for herself to do a different look each day.

“After a few months, I wanted a way to keep information about the looks I do so that I could recreate them in the future if I happened to love a particular look I came up with,” she said. “I started writing this information in my notes app but it became tedious and hard to maintain.”

Thumma thought it would be great if there was an app customized for storing information about makeup looks, including products that were used and how they were used. She also wanted a digital inventory of all her makeup so she knew exactly what she owned. So she wrote down her idea and saved it to pursue when the time was right.

That time came in fall 2017, when she started the two-semester entrepreneurial capstone projects course in computer science.

“In the class within the first week, we had to pitch an idea we had for a startup,” Thumma said. “I pitched my makeup organization idea and met Rachel, who loved the idea.”

The iPhone application taps into an existing online community where makeup creators are sharing their work through photos and videos.

“On other platforms, such as Instagram, Pinterest and YouTube, people are limited to a photo, video or description,” Platt said. “In reality, a makeup look comprises several steps and products placed on different areas of the eye. Our application allows users to store and share these details of their makeup looks, unlike any other platform.”

The pair used Swift and iOS to develop the app, but still faced a challenge in choosing a backend framework for data and file storage. They landed on Google Firebase, which they said has given them the opportunity to branch out and has made their app flexible and easy to use.

“For instance, our app allows the user to choose from various options for the eyeshadow shape and then provides a diagram, which the user can resize each section of to fit their particular eye picture shape,” Platt said.

Thumma and Platt plan to continue working on the app after they graduate in May, and said their time at CU Boulder has given them the confidence and the skills to see it through.

“We’ve found so many amazing opportunities through the university and local entrepreneurship communities, and feel very encouraged to continue our idea!” Platt said.