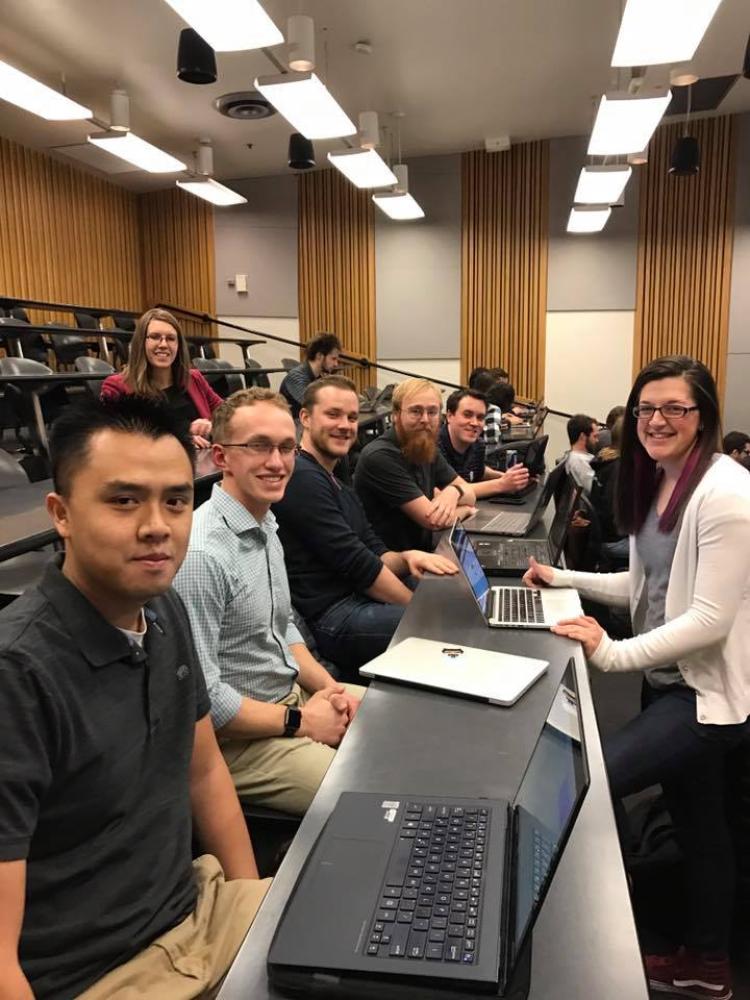 The Food for Thought team meets with their sponsor to go over project details.

This year’s Computer Science Expo will feature a wide range of senior capstone projects, from an app for wine lovers to two projects sponsored by Northrup Grumman. But it will also include several projects sponsored by nonprofits who turned to CU Boulder students to assist with their technology challenges.

Here’s a look at two of the nonprofit projects that will make their debut on May 2.

Jenny Michael and her team are designing a website and iPhone app for Last Words, a nonprofit created by Donald Stader, an emergency physician at Swedish Medical Center in Denver.

Michael explained that Stader has an interest in end-of-life care, and wanted to create a way for people to easily record and send final messages to loved ones. The Last Words website and app will allow users to record video, audio and written messages, which are then forwarded to the designated recipient automatically when they pass away.

While the team had to learn to program an iPhone app – something none of them had done before – Michael said planning for long-term storage and retrieval was actually a bigger challenge.

“What if someone decides to record a 10-hour video,” she said. “The technology isn’t a problem, but that’s expensive to store and hard to send.”

Their solution was to store messages on the website, then notify recipients to log in to receive it. Each user will be provided with a certain amount of storage for free, with the option to upgrade if they wanted to create longer messages.

The Last Words team also had to create technology that would live on after the team members graduate.

“We had to make it sturdy and provide a lot of documentation,” Michael said. “They’re planning to bring on a technical volunteer, and we had to provide them with enough documentation to be able to maintain and expand.”

Darren White and his team are building an app suite to help Denver-based Food for Thought manage their volunteers, who meet to pack weekend “PowerSacks” for kids who rely on free and reduced lunches during the school week.

“They’re just handwriting volunteer schedules right now,” White said. “We’re trying to make it as easy as possible for them to keep track of everybody.”

To get a feel for Food for Thought’s needs, the students spent a day packing food at the group’s outdoor meeting space in Denver. That experience led them to build in push notifications so organizers could easily notify volunteers of schedule changes due to bad weather.

Like Last Words, the Food for Thought team had to learn new technologies on the fly – three worked with JavaScript on the front end, while the other three tackled Salesforce on the back end.

For White, the senior project experience gave him the confidence to move forward in his second career. A former accountant, he originally intended to get a graduate degree in mathematics, but found himself hooked on computer science after a summer programming class.

“I know I’ve learned a lot – even just getting the confidence to work as part of a team and build from scratch,” he said. “I really like getting to solve problems and create at the same time.”