In her more than 20 years in the tech industry, Rupa Dachere (CompSci’94) has attended and spoken at a lot of conferences. But she often came away disappointed by a lack of focus on high-quality technical issues at women-centric conferences, or on diversity issues at male-dominated technical conferences.

“They would have diversity scholarships and luncheons, but none of it actually focused on the women engineers,” she said. “It felt like superficial efforts to show that they were doing something but no real focus on the root causes for the existing and contentious issues.” 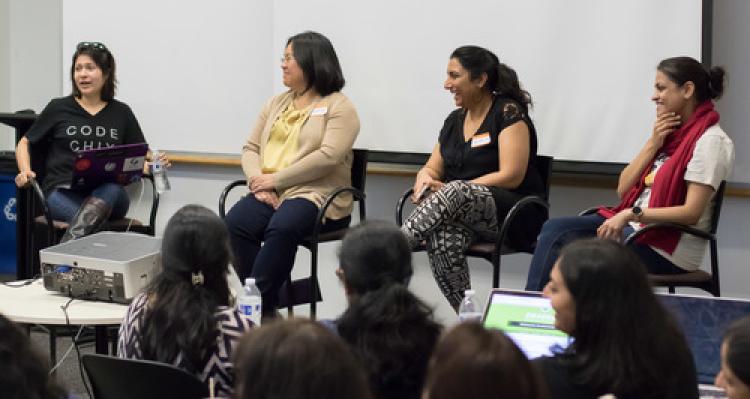 So in 2009, she decided to take matters into her own hands. She founded the nonprofit CodeChix, which is focused on retention, training and advocacy for women engineers. In 2015, they started their own annual technical conference, DevPulseCon, in order to create an “extreme safe space” for women to learn, network, talk about technical issues and share their experiences with tech culture that they can’t talk about at work.

“That is the forum I’ve created to help all the women -- mostly engineers who are hands-on and building products and associated with building products --  who are eventually going to drop off if we don’t talk about it,” Dachere said, referring to the 56 percent of women engineers who leave the industry within 10 years. “Our experiences are not an isolated thing, and I want to try to find ways to combat it.”

The conference is focused on delivering high-quality, extremely technical content for women, by women and supportive allies, Dachere said. They limit attendance for the one-day conference to 100 people, and sold out in two weeks for 2016. She personally invites and coaches all of the speakers, and allows limited time for companies to recruit in order to focus on the educational content. “We request that recruiters bring their laptops and attend the classes.  How else are they going to know how to recruit and retain good engineers?”

In addition to DevPulseCon, CodeChix also hosts workshops, hacking sessions and tech talks in the Bay Area. One of Dachere’s favorites was a three-day competition where women graduate students were invited to help build open-source technical curriculums for CodeChix per the organization’s guidelines. She said she was inspired to see them get so excited about the project and stay up late to go above and beyond on their projects.

“It gave these aspiring women engineers the chance to do something completely out of the box that could be shared with the community,” she said.

Originally, Dachere said she decided to pursue computer science because she had strong feelings about what she did not want to do with her career.

“I did not want to wear high heels and dress up,” Dachere said with a laugh. “I wanted to use my brain, build cool things that help people and be financially independent.”

Now, she looks forward to helping others do the same. Dachere said she wants to continue her work with CodeChix as they grow their volunteer base and sponsorships. It’s how she spends most of her spare time when she’s not at work as a senior member of technical staff for VMWare building cutting-edge products.

“All my weekends are booked with CodeChix stuff – board meetings, fundraising meetings,” she said. “We have a lot of good, unique programs that no one else has, and I want to see that continue to grow.”