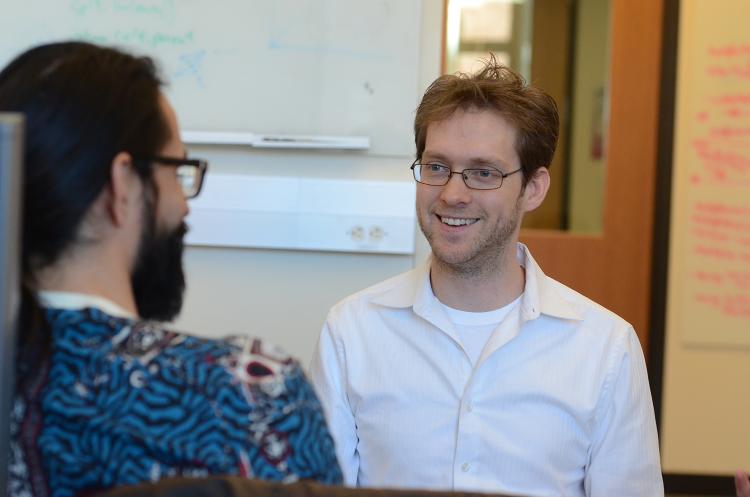 Aaron Clauset, an assistant professor of computer science and member of the BioFrontiers Institute, accepted the prestigious Erdős-Rényi Prize in Network Science today in Seoul, Korea, for his contributions to the study of network structure and community structure in networks, as well as his provocative analyses of human conflicts and social stratification.

The Erdős-Rényi Prize is awarded annually to a scientist under 40 for fundamental contributions in network science. Winners are chosen by a scientific commission of prominent network scientists. Clauset is the fifth recipient of the prize, which includes a $3,000 cash award and the opportunity to give a special prize lecture at the annual International Conference on Network Science.

Clauset was nominated for the prize by Jon Kleinberg, a professor of computer science and information science at Cornell University.

“Aaron has done some of the most creative thinking in advancing our understanding of networks, and his work on the structure of communities in networks has defined an important part of the field's research agenda in recent years,” Kleinberg said. “Through his research, he also shown a surprising range of connections between network analysis and broader questions in the world.”

Network science is an interdisciplinary field dedicated to studying complex networks of all kinds, including social networks, biological networks, technological networks and more. Advances in network science have an impact on many fields by providing new insights into how networks shape and drive complex systems, and by producing new tools for analyzing and predicting the impact of network effects.

Clauset is an internationally recognized expert in network science, and the 2016 Erdős-Rényi Prize recognizes his fundamental contributions to advancing this field. His research focuses on developing novel computational techniques for characterizing the structure of complex networks and on applying these techniques to better understand complex social and biological systems. He joined the BioFrontiers Institute and the University of Colorado’s Department of Computer Science in 2010, after completing an Omidyar Fellowship at the Santa Fe Institute.

At the University of Colorado BioFrontiers Institute, researchers from the life sciences, physical sciences, computer science and engineering work together to uncover new knowledge at the frontiers of science and partnering with industry to make their discoveries relevant.