Big data. Data privacy. The general public may hear these buzzwords often, but how many of them truly understand how companies are using the data they share online?

Mike Skirpan, a third-year PhD student in CU-Boulder’s Department of Computer Science, wants to help deepen that understanding with his team’s immersive theater performance, “Quantified Self Data Experience,” premiering in the ATLAS Institute Black Box Experimental Studio on April 28 - May 1. 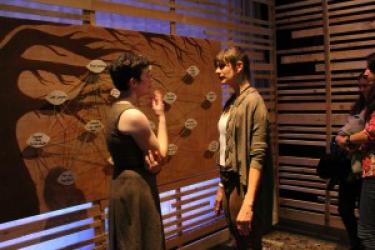 “The general public is just starting to learn about what’s possible with data and the future implications of how it’s used,” Skirpan said. “Rather than telling them that in an article, I wanted to show them.”

Exhibits could include a mock interview in which the interviewer is open about what they know about the theatergoer based on public data, or a game in which two participants’ information is mixed to see how well they know their own data.

Skirpan expects each attendee to take away something different from the show. For engineers and others working with data, he hopes they see the opportunities and implications of their work.

“For people who don’t have the same kind of training, we hope they come out with an understanding of what their data is actually used for,” he said. “The only thing people directly see is how it’s used to advertise to you, but we want to get them thinking about how an engineer thinks about data.”

For Skirpan, the attraction of immersive theater is that it makes the topic tangible and personal to both types of theatergoer without making it confrontational.

“We’re doing it in the sci-fi realm because we think that’s a neutral space,” he said. “If we make this fake world, no one feels like they have to be defensive.”

Skirpan, who has a bachelor’s degree in philosophy, said his natural instinct is always to look at what people intend to do versus what they’re actually doing, a habit he has carried into his PhD studies with Assistant Professor Tom Yeh.

“Over the summer, I was attending roundtables with these chief data scientists about data ethics,” he said. “What I thought was missing was a discussion of what users understand about how their data is being used. Personally, I don’t think the regular user realizes what they’re consenting to.”

But he also believes things will change in the next few years, as data ethics continues to move to the forefront and legislators begin considering privacy issues.

“If there’s any good time to bring this stuff I’ve been talking about for years into a project, it’s now.”

Among the more than 30 CU-Boulder students involved in the production are Jacqueline Cameron, a PhD candidate at the ATLAS Institute, and William Lewis, a PhD candidate in Theatre and Dance. Micha Gorelick of industry partner Fast Forward Labs captains the data engineering team.