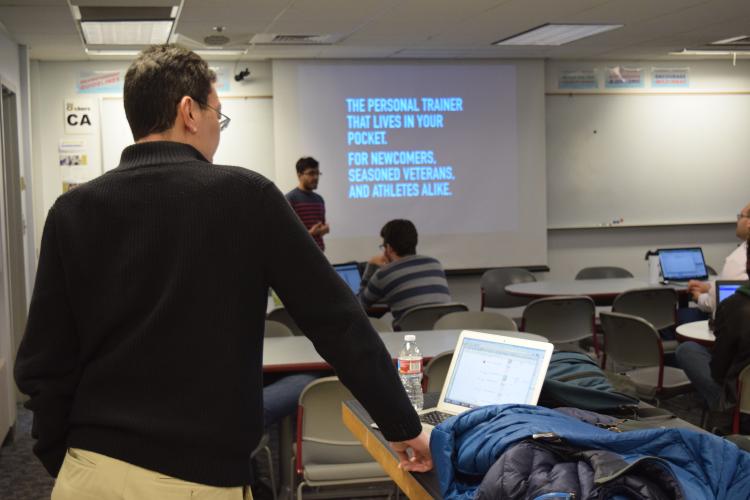 Rick Han looks on as a student practices pitching his startup.

A few years ago, Associate Professor Rick Han attended a mobile app competition at CU-Boulder. The competition had been completely organized by students and no credit was being offered, but 10 teams had still shown up to compete.

Han immediately saw an opportunity for computer science students. While most work on an industry-sponsored project for their senior capstone, he wanted to capture the entrepreneurial spirit that already existed.

“Why should students only work on other people’s ideas? Why shouldn’t they work on their own ideas?” he said.

Han began offering an Entrepreneurship in Computing course, which he and Zach Nies (CompSci’95) have now taught four times. In 2015, Han won an entrepreneurial seed grant from the university’s cross-campus Entrepreneurship Initiative to help with the next step in the course – expanding it to a full two-semester senior capstone option.

“The $10,000 will help us boot up the second semester” and go directly to student projects, Han said, helping them do things like rent server space or pay for iPhone developer licensing fees.

He hopes the capstone class will help CS students carry their projects past graduation and make them a force to be reckoned with within CU-Boulder’s entrepreneurial community.

“This makes our students much better prepared with stronger startup ideas,” he said. “Instead of just pitching an idea in Techstars or the New Venture Challenge, they can come in with a strong business plan and some good preliminary results.”

Already, the first cohort of capstone students is coming up with some great ideas, including an audio version of YouTube, a robotics startup and a pervasive keyboard.

“Undergrads have the ability to transform the world with their ideas,” Han said.