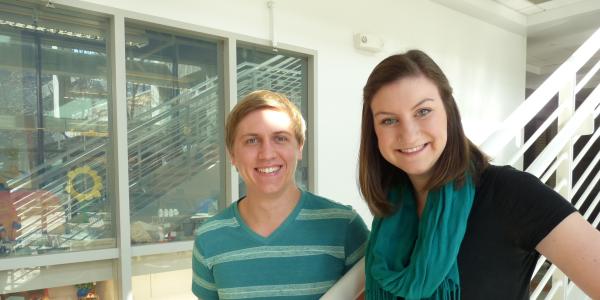 For the first time since its founding at CU Boulder in 2002, the Topplers Domino Award opened to students from other universities for 2014-15. More than 100 students from 44 schools participated in the essay competition, but when the judging was complete, two of the three awards still came home to CU-Boulder.

Freshman Austin Holler and sophomore Julia Heil, both students in the BA program, will be headed to South by Southwest Interactive, along with Will Preachuk from the University of Nebraska, Lincoln. For his essay, Holler wrote about Paul Baran, a pioneer in the development of computer networks. Heil wrote about Barbara Liskov, an MIT professor who work led to the development of object-oriented programming.

According to Topplers, the Domino Award challenges students to think about “how seemingly simple technology advancements in the past have spurred chains of momentum that have added up to significant impacts in modern society and to inspire these students to see the potential they have to make a difference in the world through their future work. Topplers and the Domino Award were founded by CU Boulder alumnus Herb Morreale (CompSci’91).