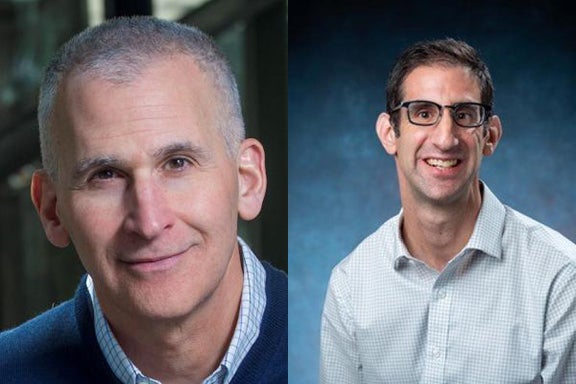 Research into preventing and reversing the creation of misfolded protein aggregates known as fibrils could provide new therapeutic opportunities in the fight against neurodegenerative diseases such as Alzheimer’s.

In a new paper published in The Journal of Physical Chemistry Letters, lead author Andres Chaparro Sosa and Sabrina Matos de Olivera da Silva worked with Associate Professor Joel Kaar and Professor Daniel Schwartz to describe a novel approach to break up misfolded protein fibrils using multi-component lipid bilayers. They were joined on the paper by Garry Morgan from the Molecular, Cellular & Developmental Biology Department who obtained high resolution electron microscope images of the bilayers in contact with protein fibrils, which was critical to understanding the mechanism of action of the bilayers.

The team studied the interaction of lipid bilayers with amyloid-beta, which is a precursor to protein fibrils that are formed in Alzheimer’s disease. Proteins only work as intended when they are properly folded. Large aggregates of misfolded proteins are present in many neurodegenerative disorders. When the composition of the bilayer is rationally tuned, these bilayers can rescue misfolded proteins by helping them refold via a chaperone-like effect.

“Researchers have been working on strategies to inhibit and reverse amyloid fibrils for a long time, in the hope that they could lead to Alzheimer’s treatments,” Schwartz said. “But the advance spearheaded by Andres and Sabrina is especially exciting for several reasons. For one, it is an entirely new approach, using only non-toxic natural lipids. Also, it appears that it not only reduces the formation of new fibrils, but can degrade previously formed, mature fibrils, potentially reversing the progress of a disease.”

“This work is the result of a NIH-funded project and stems from a long-standing collaboration between our groups to understand the interaction of proteins with surfaces using novel, single-molecule biophysical methods,” Kaar said.

Kaar describes this research as a new paradigm—a set of assumptions that researchers in a given field take to a problem—in reversing protein fibril formation.

“Our results showed that the rate and extent of fibril formation was dramatically reduced by tuning the bilayer composition to employ a specific mixture of zwitterionic and anionic lipids—that is, lipids with both positive and negative charges as well as lipids with just a negative charge,” Kaar said. “Bilayers with the same optimized composition also disrupted a significant fraction of mature fibrils in as little as a few hours and actively promoted re-folding of amyloid-beta.”

More promising is that this approach is catalytic in nature, meaning the bilayer surface can re-fold many amyloid-beta molecules, thereby amplifying the effect. Only a small amount of the bilayer surface would be needed to have a large effect on the rescue of misfolded proteins.

The researchers also believe that such bilayers can be applied to nanoparticles that are capable of crossing the blood-brain barrier, a key ability for treating ailments of the brain. This process may have the added benefit of stabilizing the bilayer and enhancing the efficacy of a treatment.

The Kaar and Schwartz groups have collaborated for 10 years on developing and applying novel single-molecule methods to understanding how proteins interact with surfaces.

“Each lab has expertise in their own fields, and being able to merge those expertise to answer interesting and unique scientific questions has been exciting,” Sosa said. “I think a lot of the projects we have worked on would not have been possible without this collaboration.”

Kaar and Schwartz speculate that this approach may be used to address other neurodegenerative diseases, including Parkinson’s and Creutzfeldt−Jakob diseases. Certain cancers are also linked to protein misfolding as a result of mutations that destabilize p53—the major tumor suppressor in cells—making this approach a candidate for cancer treatments as well.

The authors are also exploring how tuned bilayers may be used to improve the stability of therapeutic proteins during production and storage.