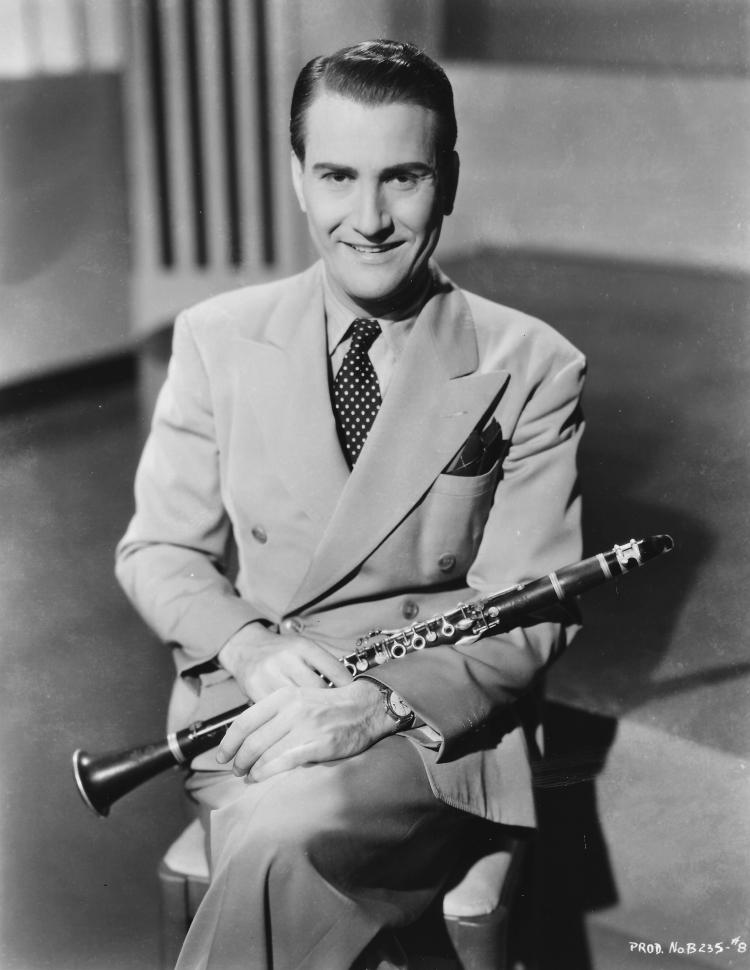 Artie Shaw (Avraham Ben-Yitzhak Arshawsky) (1910-2004), a jazz and popular music legend, was a clarinet virtuoso and one of the leading bandleaders of the 20th century. He organized and led several of the most critically acclaimed and nationally successful orchestras of the big band era. He became the #1 bandleader in the USA in a meteoric rise to national prominence with his 1938-1939 band, on records, network radio broadcasts and in motion pictures. The 1938-1939 band shot to fame with their best-selling record of Cole Porter's "Begin the Beguine".  An unabashed and self-critical intellectual, the enigmatic perfectionist walked off the bandstand at the Cafe Rouge of New York's Hotel Pennsylvania in November 1939 and fled to Mexico, only to return in the spring of 1940 to lead another successful group including a large string section, with best-selling hits including "Frenesi", "Moonglow", Temptation" and "Star Dust". In 1942 Shaw volunteered for service in the United States Navy, where he led his legendary service orchestra to Hawaii and the South Pacific. Following military service Shaw returned with another prominent and successful band. As enigmatic personally as he was professionally, Shaw led several additional groups before leaving music in the 1950s to focus on other pursuits, including his efforts as an author.

Artie Shaw historian and collector Reinhard Scheer-Hennings of Dusseldorf, Germany and Dennis M. Spragg have come together to produce a comprehensive history of Artie Shaw's fascinating career and compelling musical legacy, including a complete discography, chronology and catalog of Artie Shaw materials preserved in the Glenn Miller Collections.

The Artie Shaw Catalog is produced by Reinhard Scheer-Hennings and Dennis M. Spragg for the Glenn Miller Collections in cooperation with the University of Arizona School of Fine Arts, College of Music, Artie Shaw Collection, Keith Pawlak, Music Curator. We wish to thank Keith and the University of Arizona for access to Artie Shaw's music library, including music scores, parts, composer and arranger credits. The producers also wish to thank our kind associates at Sony Legacy and the Library of Congress for their support and assistance with recording session sheets, network broadcast logs. We dedicate this comprehensive document to the many friends of Artie Shaw around the world.