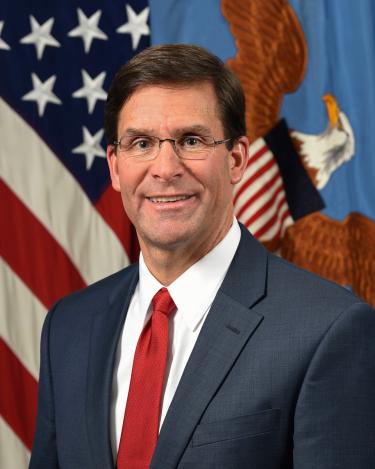 Open to CU Boulder students, faculty and staff only.
Register with your colorado.edu email address.

Please join Mark Sirangelo as he welcomes Dr. Mark T. Esper, Former U.S. Secretary of Defense, to CU Boulder for a very special off the record talk and discussion on Dr. Esper’s views regarding our changing world, what will it look like in the coming years and why government service is still important today.

He is a 1986 graduate of the United States Military Academy. Upon completion of Ranger and Pathfinder training, he served in the 101st Airborne Division and participated in the 1990-91 Gulf War. He retired from the U.S. Army in 2007 after spending 10 years on active duty and 11 years in the National Guard and Army Reserve.

After leaving active duty, he served as Chief of Staff at The Heritage Foundation, as the legislative director to former Senator Chuck Hagel, as a senior professional staff member on the Senate Foreign Relations and Senate Government Affairs committees, policy director for the House Armed Services Committee, and national security advisor for former Senate Majority Leader Bill Frist. He also served as the Deputy Assistant Secretary of Defense for Negotiations Policy at the Pentagon.

Dr. Esper holds a Master of Public Administration degree from the John F. Kennedy School of Government, and a doctorate in Public Policy from George Washington University.