"If the chance to come to the ice presents itself, get after it."

-Ian Geraghty (AeroEngr BS'19) is in the middle of yearlong research experience in one of the most inaccessible and extreme places on Earth: Antarctica.

A Year in Antarctica 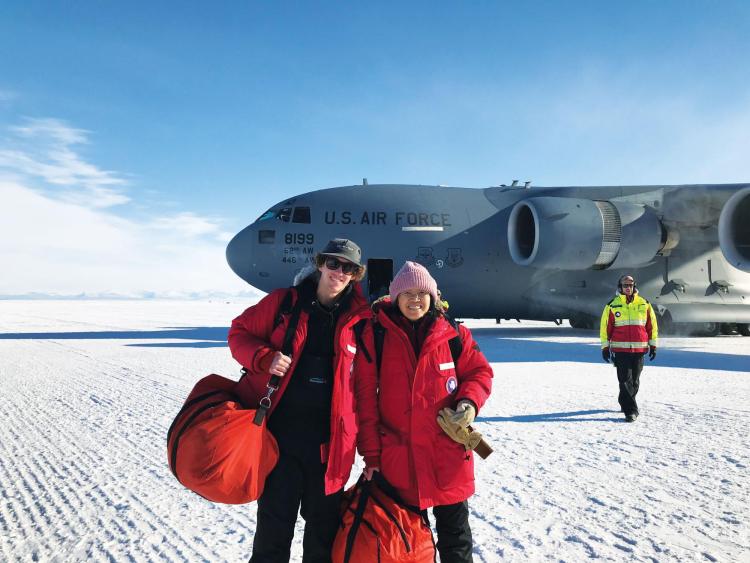 In the early 1900’s, Ross Island acted as a base for multiple Antarctic exploration expeditions led by the likes of Ernest Shackleton and Robert Falcon Scott. Remnants of the heroic age of Antarctic exploration can be found all over the island, along with the United States’ largest Antarctic research station, McMurdo Station, which is managed by the National Science Foundation.

Scenic is an understatement for the landscape around McMurdo. Across the McMurdo Sound, the Transantarctic mountains stretch out with glacial ice creeping slowly through the valleys enroute to the ocean. In the summer, pods of orcas can be spotted navigating the icy waters while seals and penguins lounge casually on ice floes. In the winter, the Milky Way can be seen with astounding clarity and auroras paint the sky vivid hues of green.

The Milky Way can be seen with astounding clarity and auroras paint the sky vivid hues of green.

Aside from the stunning surroundings, McMurdo is home to a unique community made up of some of the most interesting individuals I’ve ever met.

I arrived at McMurdo in October 2018 eager to experience as much as possible during my 13-month deployment as a research assistant. The group that I work with uses two sophisticated lidar systems to do remote sensing of the upper atmosphere.

Dr. Xinzhao Chu of the Cooperative Institute for Research in Environmental Sciences and the Smead Aerospace Engineering Sciences department at CU Boulder designed these lidars and coordinates the project. Various members of the group have been at McMurdo continuously since 2010 operating the instruments with the ultimate goal of making observations over an entire solar cycle, which is approximately 11 years. 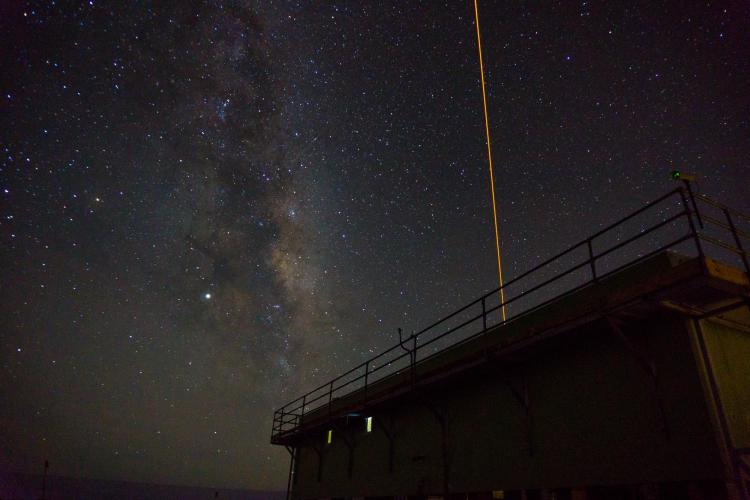 The lidar lab is located in Antarctica New Zealand’s building at Arrival Heights near McMurdo. The orange laser beam is the sodium lidar at a wavelength of 589 nm.

Using Lasers to Study the Atmosphere

The systems we use are called resonance fluorescence lidars. Basically, it’s a pulsed laser that we shoot into the sky. Meteors that enter the atmosphere burn up and deposit a whole layer of metal between ~80 – 115 km.

These two lidars are designed to observe specifically the iron and sodium in this layer. The lasers are tuned to wavelengths that excite these atoms and a telescope on the ground is used to count how much light is emitted as the atoms de-excite. With some special techniques, these photon counts can be processed into density, temperature, and even wind speed measurements. The data is used to study a variety of atmospheric properties at altitudes that are so high up that terrestrial weather and space weather processes influence each other.

A lot of work goes into a long-term observational campaign in Antarctica such as this. There are two of us at McMurdo working on the project this year. As lidar operators we need to be deeply familiar with all the hardware that makes up the lidar systems so that when equipment starts to fail we are prepared to fix it and get everything up and running again.

We work opposite 12-hour shifts so that we can have 24-hour coverage on any given day, but we don’t take data every day. Clouds scatter the laser too much so data collection is restricted to times when the sky is clear. Therefore, we are constantly monitoring the weather and prepared to drive to our lab which is located nearby McMurdo in an area called Arrival Heights. 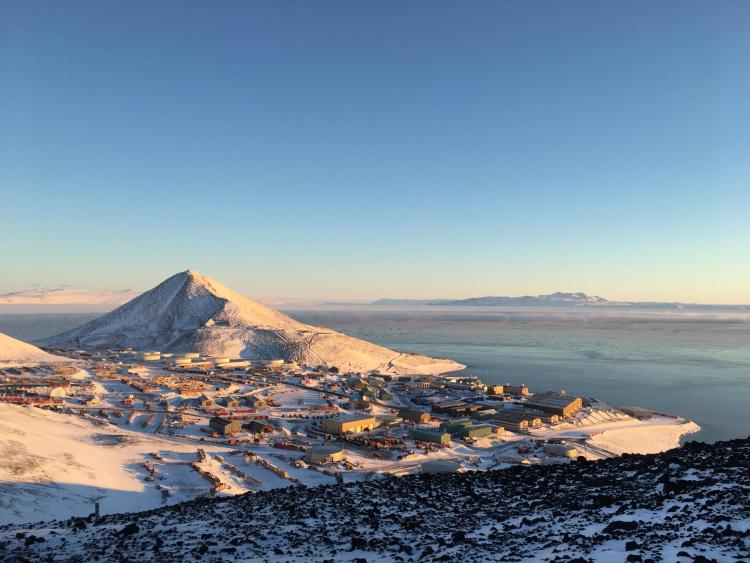 Looking down on McMurdo Station

Our group is just one of many doing science at McMurdo and the Albert P. Crary Science and Engineering Center (known locally just as “Crary”) is the hub of it all. In the summer, there is a nearly constant flow of researchers stopping through from New Zealand, the South Pole Station, and various field camps around Antarctica.

The research that takes place at McMurdo is very interdisciplinary and CU Boulder has a huge presence here. Just this year I’ve had the pleasure of interacting with CU graduate students and faculty that operate a meteor radar, collect biological samples in the McMurdo Dry Valleys, collect meteorites in the more remote parts of Antarctica, service automatic weather stations, and launch high-altitude balloons to study atmospheric aerosols.

The research that takes place at McMurdo is very interdisciplinary and CU Boulder has a huge presence here.

Most of the population at McMurdo, which can be greater than 1,000 people in the summer, aren’t scientists though. The majority of people are contractors like electricians, plumbers, cooks, and physicians, but at its core McMurdo is an entire community dedicated to performing and supporting world-class scientific research. The widespread mutual interest in the sciences and the comradery that comes with just making it to one of the more remote locations in the world makes for a friendly atmosphere on station.

After work hours people can relax at one of the bars, go hiking, or attend science lectures. On the weekends there are more community events like softball games, live music, and infamous holiday parties. Contrary to popular belief, there are plenty of opportunities to be social and stay busy down here.

The summer at McMurdo is lively with 24 hours of daylight, mild temperatures, and hundreds of people, but the winter is a whole different story. The calm winter season is a nice respite from the hectic summer. For the most part, Crary is quiet except for the howling of fierce winds outside. 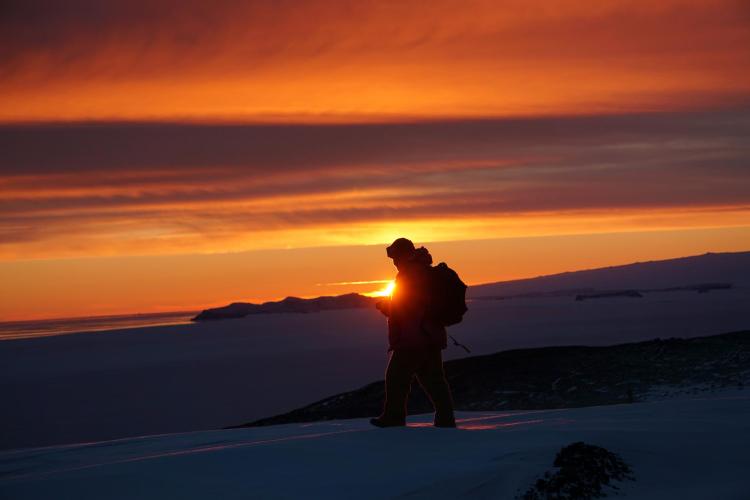 There’s less than a handful of scientists here and only 140 people in total on station. The Sun stays below the horizon between late April to August and as a result this is the time of year when we collect the best data. Since we are counting photons coming back from the upper atmosphere it’s best if we don’t have to compete with the light from the Sun.

Antarctic winters are generally known for being cold and they live up to the hype. Once you get ambient temperatures around -40 ºF and wind speeds up to 50 mph the wind chill can hit – 70 ºF pretty easily. However, if you can avoid the gale force winds, the temperatures are pretty manageable with your issued extreme cold weather gear.

If you do take the time to layer up and go outside you’re rewarded with incredible views of the night sky. That being said, the first sunrise in August is going to be a welcome sight. I’m not even going to get into how stoked I am to eventually make it back to Colorado.

These few paragraphs are a poor attempt to convey what it’s like to spend a year at McMurdo Station. It’s an esoteric place in the sense that only people who have been here really understand why it’s so special.

So, if the chance to come to “the ice” presents itself, get after it. If doing research in Antarctica is your goal, CU Boulder is a great place to be. There are more opportunities than you’d expect. If you’re interested in travelling to Antarctica in a different capacity, a few of the companies that hire contractors are based out of Denver so there’s other opportunities nearby as well. 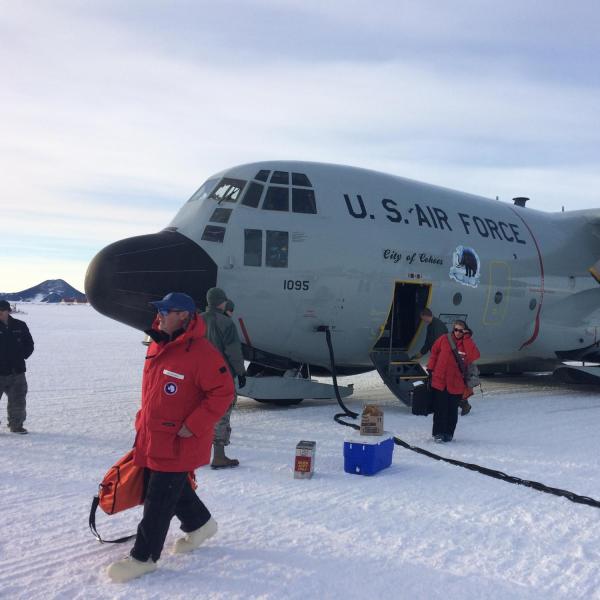 C-130s land directly on the Ross Ice Shelf to bring passengers and cargo to McMurdo Station. 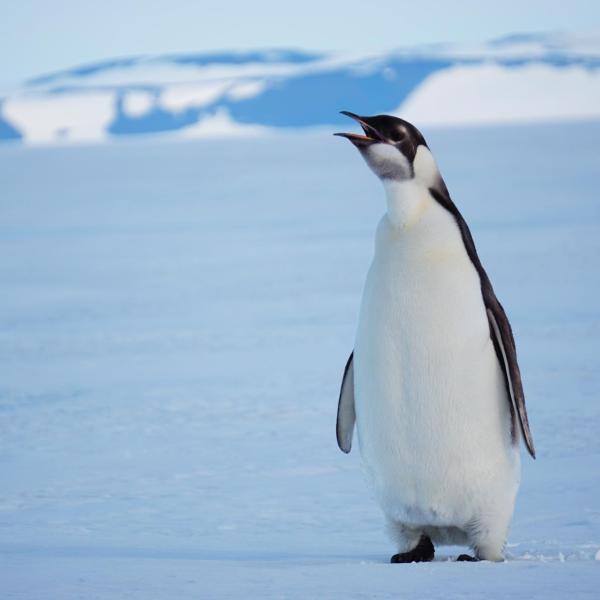 Young and curious emperor penguin out on the Ross Ice Shelf near the airfield. 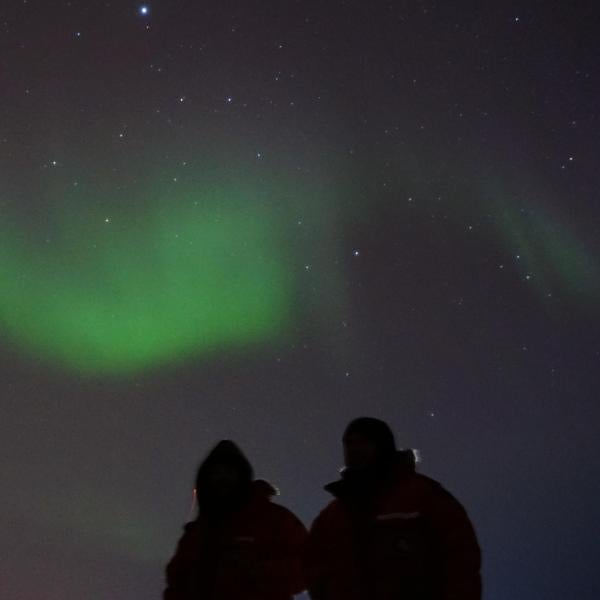 Toughing through well-below freezing temperatures and bitter winds to take photos of auroras.