Analyzing gravity waves at the edge of space 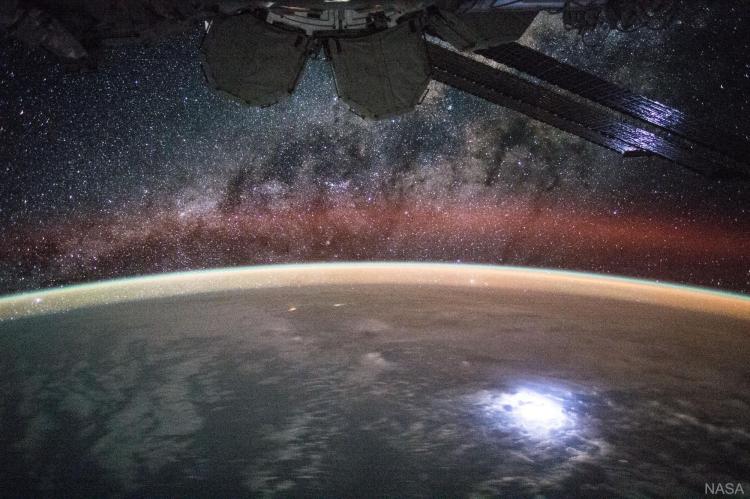 An image taken from the International Space Station shows orange swaths of airglow hovering in Earth’s atmosphere. NASA’s new Atmospheric Waves Experiment will observe this airglow from a perch on the space station to help scientists understand, and ultimately improve forecasts of, space weather changes in the upper atmosphere.

Jeff Forbes is working on a research project slated for the International Space Station (ISS) to help us better understand and forecast conditions on the edge of space.

NASA is funding the Atmospheric Waves Experiment (AWE) to analyze gravity (or “buoyancy”) waves in a region of the upper atmosphere that can cause disruptions in radio and satellite communications as well as GPS – key tools for safe airplane and ship travel.

From its International Space Station perch, AWE will focus on colorful emissive layers in Earth’s atmosphere, called airglow, to determine what combination of forces drive space weather in the upper atmosphere.

This region was once thought to be affected only by the sun’s ultraviolet light and particles, but more recent analyses have shown that gravity waves generated by weather patterns on Earth are also having an impact.

“A lot of energy and momentum from ground weather – thunderstorms, hurricanes, etc. – gets transferred up to this area. It’s the intersection of space weather and Earth weather,” said Forbes, a professor emeritus and research professor in the Ann and H.J. Smead Department of Aerospace Engineering Sciences, who is serving as deputy principal investigator for the project.

Past investigations into the phenomenon have been conducted, but mostly from the ground looking up.

“On the ground, you can only take measurements on cloudless nights, and only within the small area of the sky directly above the equipment. Looking down from ISS, in four days we can paint a picture of 85 percent of the globe,” Forbes said.

The lead organization for the project is Utah State University’s Space Dynamics Laboratory, where the technology was first developed for ground-based use by AWE Principal Investigator, Physics Professor Michael Taylor of USU’s Center for Atmospheric and Space Sciences. Taylor, Forbes, and their teams are now working to adapt it for operations in space.

Once launched, the AWE equipment will allow for the creation of a global map of gravity wave characteristics and how those waves correspond to ground-based sources like tropical storms and convection. These observations dovetail with other NASA missions such as the Global-scale Observations of the Limb and Disk, or GOLD, which launched in January 2018, and the upcoming Ionospheric Explorer – both of which seek to unravel different aspects of how terrestrial weather and space weather interact.

The experiment is expected to launch in late 2022 and will be in operation mounted to the outside of the ISS for two years. NASA is providing $42 million for the project.

The team will be conducting research with the data it collects, but they will not be the only ones with access – all of the information will be open for analysis by the worldwide scientific community.

“All data will be publicly available within a few months of collection on a NASA database,” Forbes said. “Our job is to produce the science we’re interested in, to understand these waves and their role, but we’re not doing all of the science. Others will be able to use it for their own research as well.”