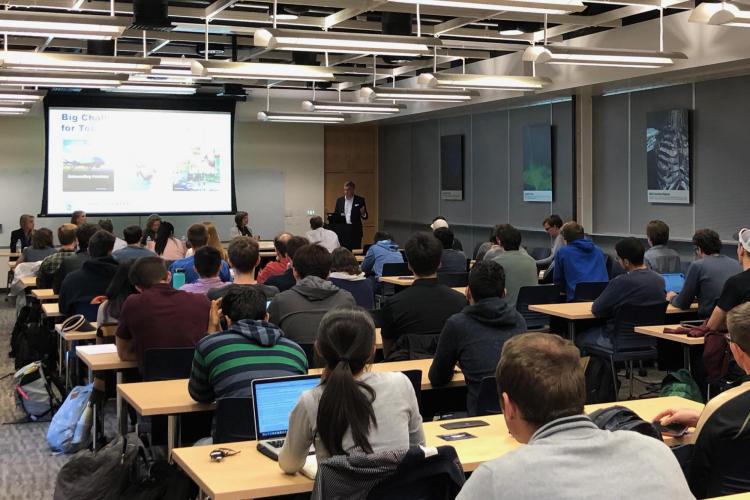 "It’s an exciting time to be in aerospace. The biggest problem right now is keeping up with demand."

University of Colorado Boulder aerospace engineering students heard plenty of good news about the future of their chosen industry during a special panel last week as part of the “Aerospace on Campus” series put on by The Wings Club.

The event, which highlights career opportunities in the aerospace and defense industries, brought together senior staff from Aviation Week Network and Pratt & Whitney to share an inside scoop on careers and the direction of the field.

Held Oct. 17 in the Discovery Learning Center, students were joined by panelists:

Mary Ellen Jones of Pratt & Whitney was also joined by two young professionals from her company, Amanda Walkowicz and Anneliese Brown, who could speak to the transition from student to industry profession

“I didn’t have that 10,000 foot view. It was helpful to see where companies are moving,” said Basu Parmar, an aerospace master’s student.

The discussion was wide ranging and even included a technical briefing on Pratt & Whitney‘s new geared turbofan jet engine.

“The guests were pretty interesting and they knew what they were talking about,” said sophomore aerospace major Sam Garza.

“It’s energizing to see what students are fired up about,” said panelist Jones. “There’s a true zeal for the industry, and companies like Blue Origin and SpaceX are doing a good job to make space more attainable. It’s not just NASA.”

The Aerospace on Campus series, organized by Aviation Week and The Wings Club, only occurs a few times a year at select universities across the country. Student attendees were offered free memberships to The Wings Club and a digital subscription to Aviation Week & Space Technology.