From the Marines to CU Engineering - Steve McGuire 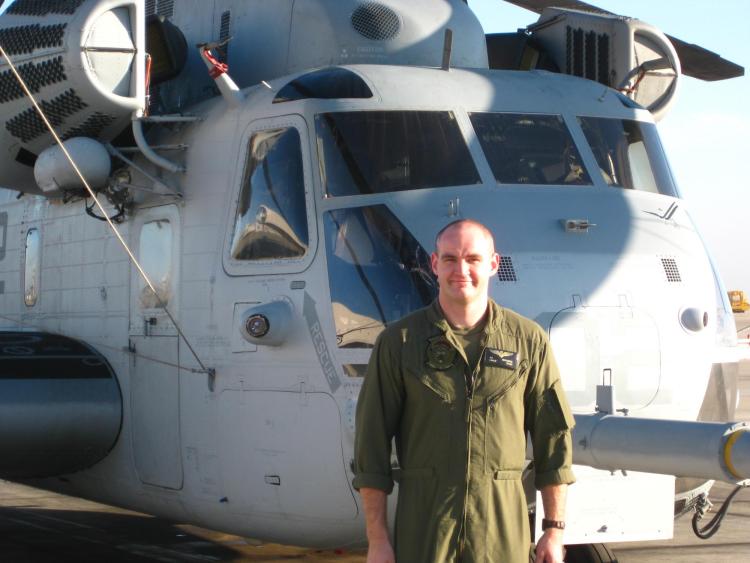 I grew up in suburban Pittsburgh, where my parents were both professionals in environmental engineering. We had a home computer with 640KB of RAM and a 20MB hard drive running at a whopping 8 MHz. I learned to write software in BASIC, then picked up other languages like Visual Basic, C, C++, Java, and assembly for a few different architectures over the years.

I graduated as valedictorian of my high school and earned entry into Penn State to study computer engineering.

As I neared graduation from my bachelor’s, I was interested in both graduate school and the military; I chose defer graduate school to join the Marine Corps as an aviator.

Eventually, I reached the rank of captain and served as a pilot of the CH-53E Super Stallion heavy-lift helicopter during a combat tour in Iraq.

I learned a lot about myself and others, particularly with regards to small-unit leadership and mentoring. I also learned about real-world engineering, and the constant compromises that have to be made.

Technically, the aircraft was in desperate need of a clean sheet, having been upgraded multiple times without fully integrating the new systems in each round. One configuration of the aircraft included three GPS systems, none of which were certified to use in flight. I wanted to help in the engineering aspects of aircraft design – in many ways, the aircraft was simply yet another robot, although rather limited in scope and function.

I’m studying robotics through the lens of control systems as a component of aerospace engineering. In particular, I’m working on helping robots to better understand and predict human performance.

Once my military service concluded, I accepted employment with a Google Lunar X Prize team, where I was the lead avionics engineer as well as chief test pilot. However, I found myself wanting to earn higher credentials – and reminding myself that I had deferred graduate school.

I wanted to come to graduate school to further my understanding of the fundamentals underlying modern robotics, as well as earn credibility for my life experience. Using technology without understanding why things work the way the way they do and the implied limitations sets one up for inopportune failure caused by simple ignorance. I saw this firsthand as a pilot.

CU Boulder was an appealing choice due to the location and the people.

I had no desire to live in an urban environment, and the weather is fantastic. I had been to an event held at CU during my undergraduate career, and so was familiar with how beautiful Boulder is. I saw that there was more than enough opportunity to let me explore and find a way to leverage my experience to contribute.

Today, I’m studying robotics through the lens of control systems as a component of aerospace engineering. In particular, I’m working on helping robots to better understand and predict human performance. I’m funded through a NASA Space Technology Research Fellowship (NSTRF).

The people make all the difference at CU. My relationship with the faculty is much more one of a collaborator, rather than that of a master.

There is no shortage of interesting projects and problems to be studied; I’m thankful to have earned an external fellowship that has given me a certain independence and the ability to self-direct my research. While my time here is nearly at an end, I know that other opportunities await and there’s always the potential to return some day.