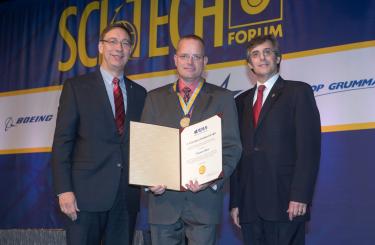 University of Colorado Boulder Smead Aerospace Professor Hanspeter Schaub has received not one, but two awards from the American Institute of Aeronautics and Astronautics (AIAA).

Schaub accepted the J. Leland Atwood Award and the Mechanics and Control of Flight Award during the 2018 AIAA Science and Technology Forum and Exposition (SciTech Forum) on January 11 in Kissimmee, Florida.

The Atwood Award is bestowed on one aerospace engineering educator annually for outstanding contributions to the profession. The distinction recognizes Schaub for his "innovation, elegance, dedication, enthusiasm, and impact" as an aerospace educator. 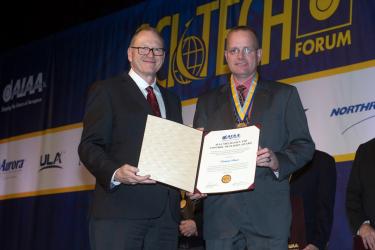 The Mechanics and Control of Flight honor is for his "far-reaching theoretical and practical advances in spacecraft guidance, navigation and control, particularly in the fields of relative motion and nonlinear attitude dynamics and control, as well as space debris remediation dynamics."

Schaub joined the CU Boulder faculty in 2007. He holds the Glenn Murphy Endowed Chair position in the College of Engineering and Applied Science and is also the Smead Aerospace Associate Chair for Graduate Studies.