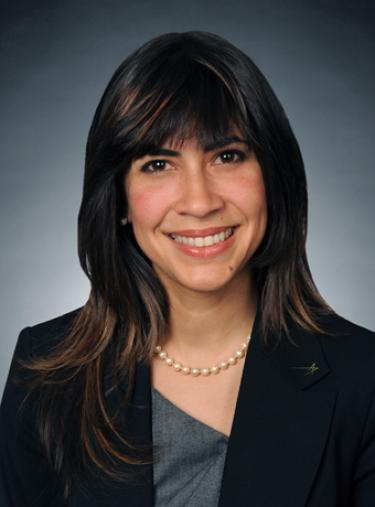 Vanessa Aponte (AeroEngr PhD '06) has rubbed shoulders with astronauts, designed equipment to travel into space, and worked with technology so specialized she is not allowed to talk about it. As a Lockheed Martin engineer and CU aerospace PhD graduate, she has achieved great things and is instilled with a personal drive and ability to create opportunities where others might see none.

It is something that has guided her from a young age. Growing up in primarily Spanish-speaking Puerto Rico, Aponte decided she wanted to learn English.  When she couldn’t find someone nearby to teach her, she came up with another solution - FM radio, where DJs have strong diction and enunciate every word.

She did well in school, particularly chemistry, and decided to become a chemical engineer, enrolling at the University of Puerto Rico at Mayaguez. Seeing potential for a brighter future in the United States, she sought out summer research internships on the US mainland. Two universities accepted her into their programs, CU Boulder and a school in another state. She picked up the phone called both to get more information.

"The administrator at the first school was cold and unengaging, and urged me to make up my mind. When I talked to the CU Boulder program organizer, she spoke with kindness and acknowledged the other university had offered a larger stipend, but she guaranteed I would have a great time, meet great people, and truly have a wonderful experience in Boulder. I have never looked back,” Aponte says.

A particular event that summer in Colorado gave her life a new direction. While Aponte’s internship was in chemical engineering, on a lark she attended an aerospace event hosting astronauts from STS-77. This was the mission with the famous space Coca-Cola dispenser, a unit designed by BioServe Space Technologies at CU Boulder. The discussion amazed her, and Aponte set a new goal: work for NASA. Unfortunately, she faced a serious obstacle.

"It turned out that as a chemical engineer, I was ill prepared for jobs at NASA," she says.

Unwilling to give up and realizing she needed additional education, Aponte decided to earn a PhD, and was accepted by the CU Boulder aerospace program.

Designing A New Way to Space

Her work as a student focused on microelectromechanical systems or MEMS, particularly development of technology to monitor astronaut immune response. The research gave her the chance to spend a semester working at Johnson Space Center in Houston, fulfilling her NASA goal.

After graduating, she was hired by Lockheed Martin Space Systems in Waterton Canyon for a key NASA-funded project.

"They were working on Orion and it just blew me away. The prospect of designing the next-generation space vehicle and getting to stay in Colorado was too enticing," she says.

Aponte spent six years on Orion, first on the redesign of the old space shuttle launch pads, and then on environmental systems for the spacecraft. It was a shift from the human-centered MEMS work she did as a PhD student, but was no less exciting.

"It's amazing to design something that has gone to space. Even if I don’t get to go myself, it’s something explorers will fly," she says.

Now in her 11th year at Lockheed Martin, her current assignment is in the company’s military support program. She leads a team of technical experts on evaluation of new technologies. It is a position working on the leading edge of science and engineering, and a job many engineers would relish. She earned it by stepping up when someone was needed.

"The chief engineer retired, and I volunteered to fill in while they hired a replacement," Aponte says.

Two years later, she is still in the role, and on a permanent basis.

"I volunteer for a lot at Lockheed Martin. Projects others don't want to do. The Orion launch pad redesign was one of those. People were concerned it would get bogged down in bureaucracy at NASA, but it's one of the most fun projects I ever did,” she says.

The excitement she feels about aerospace extends well beyond her own career and into the volunteer realm, where she promotes engineering to the next generation.

She has worked with Big Brothers Big Sisters, Girls Inc., and Shades of Blue, which promotes aviation and aerospace at the K-12 level. Each semester, she brings high school students to CU Boulder to talk about the industry and showcase new research.

“Some students have always known what they want to do. I didn’t. It took special people in my life to be there at the right times and turn my uncertainty into passion,” Aponte says. “It's my duty to do the same.”