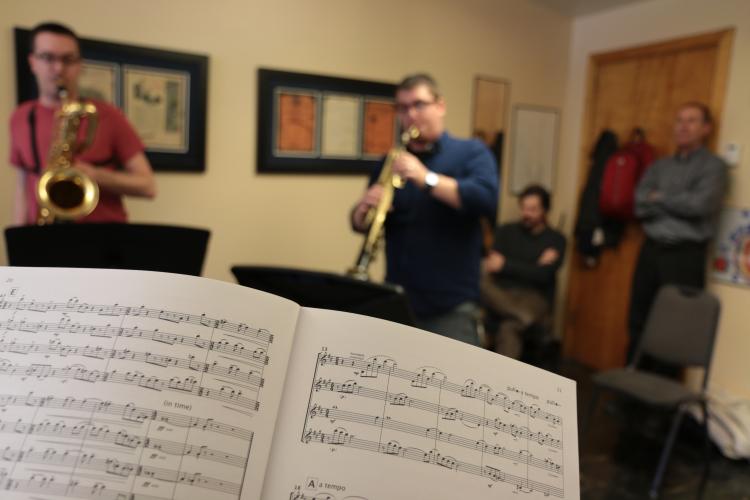 It’s been a whirlwind year for composer Carter Pann. Since being named a finalist for the Pulitzer Prize in Music for his saxophone quartet “The Mechanics: Six from the Shop Floor,” Pann has been working on new chamber music, large ensemble pieces—even an homage to Ravel’s “Boléro.”

And of course, plenty of saxophone commissions.

“The sax world is kind of gluttonous for contemporary music. They clamor for it,” says the composition professor.

And this weekend, after about 20 other performances around the country, “The Mechanics” comes to Colorado for the first time. The premiere performance is this Saturday at the Dairy Arts Center. Tackling the piece is the CU Boulder graduate saxophone quartet, the Black Diamond Quartet.

The concert is part of the “One Night Only” series and is sponsored by former Smithsonian curator and Boulder resident Arthur Lieb. It’s the second “Mechanics” performance in a week for the quartet: They played the piece Sunday at the North American Saxophone Alliance Regional Conference in New Mexico. Add to that an upcoming in-studio performance on a new Colorado Public Radio contemporary music series, and you could say it’s been a whirlwind year for the four students as well.

“It’s one of the hardest pieces we’ve played yet as a group. The majority of our rehearsal time is spent on this piece,” soprano saxophonist Ryan Van Scoyk says.

The Black Diamond Quartet—comprised of Van Scoyk, Chris Ruiz, Sean Edwards and Robert Ward—first began rehearsing the piece together at the behest of saxophone professor Tom Myer in August. Since then, Van Scoyk says they’ve worked on it at least a couple of hours every week.

“The piece is driven by the energy of a car engine and a mechanic’s shop, so that means it has to go fast,” he says. “But it’s also extremely complicated. Most of the work we’ve done on it has been pulling it apart, finding all the different underlying melodies woven together. It’s really fun to play.” 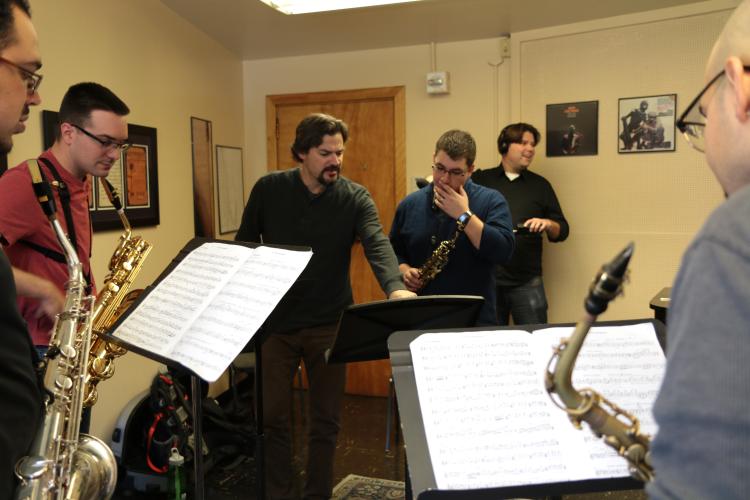 Along the way, Pann has been lending a composer’s perspective, helping with interpretation and making sure the piece moves.

“It’s been great to rehearse with them. This is not an easy piece and they’re giving it a good stab. It’s going to be a great performance,” Pann says.

Van Scoyk, who was at the world premiere of “The Mechanics” in 2014, says though Pann isn’t a saxophonist himself, he writes adeptly for the instrument. “A lot of music we play was written by a pianist or some other instrumentalist, and it doesn’t feel quite right for sax,” he explains. “But Carter understands all the idiosyncrasies of the instrument and this piece works really well on the saxophone.”

The CU group isn’t the first student ensemble to take up “The Mechanics”: Pann says it’s becoming part of the collegiate saxophone repertoire.

“It’s finding itself on a lot of conference schedules,” he says. “A lot of sax teachers are giving it to their students to perform.”

“The Mechanics” isn’t Pann’s first saxophone piece, and it definitely won’t be the last. He says it’s spawned more commissions, including a technically “brutal” follow-up for the Capitol Quartet—the group that made the Pulitzer-nominated recording—fittingly titled “Capitol Punishment.”

“I also just finished a saxophone sonata for the alto player of the Capitol Quartet,” Pann adds.

Van Scoyk says the more closely he and his colleagues work with composers, the more deliberate their playing becomes.

“Carter is very specific in his writing. He notates every dynamic, every articulation. So we’re trying to play what’s on the page as much as we can.

“It’s such a cool opportunity to have composers like Carter Pann and Dan Kellogg right down the hall,” the Denver-area native says. “It’s really amazing that we’re at the center of a thriving arts scene in Colorado.”

The Colorado premiere of “The Mechanics: Six from the Shop Floor” is this Saturday, March 4, at 7:30 p.m. at the Gordon Gamm Theater at the Dairy Arts Center. For ticket information, visit the One Night Only website. Listen for the piece and the Black Diamond Quartet on CPR this spring.

As we celebrate National Hispanic Heritage Month, we're inspired by the resilience and determination of DMA student Pablo Beltran. END_OF_DOCUMENT_TOKEN_TO_BE_REPLACED

We’re thrilled to introduce Raven Dow-Hygelund and Anna Kallinikos as the most recent recipients of the College of Music’s Sher Distinguished Musician Scholarship. END_OF_DOCUMENT_TOKEN_TO_BE_REPLACED
Return to the top of the page