Turning a Love for the Outdoors into PhD Science

In the spring of 2009, CU Boulder researcher Alice Hill (PhD Geography, 2017) sat atop an icy Alaskan glacier for the first time, supporting an outdoor leadership team of 12 people. The landscape was stark and white—and cold, sharp wind was constant. She was bundled in windproof down, sipping hot liquids to keep warm after a day of mountain exploration. Eight years later, she was hiking in Central Asia, working with a socio-economist to talk with the local residents about their water use. Then in 2015 she found herself in hot and humid South America, in the rugged jungles of the Marañón River, Peru, zipping along whitewater waves in a raft loaded with scientific equipment to study the water coursing below. 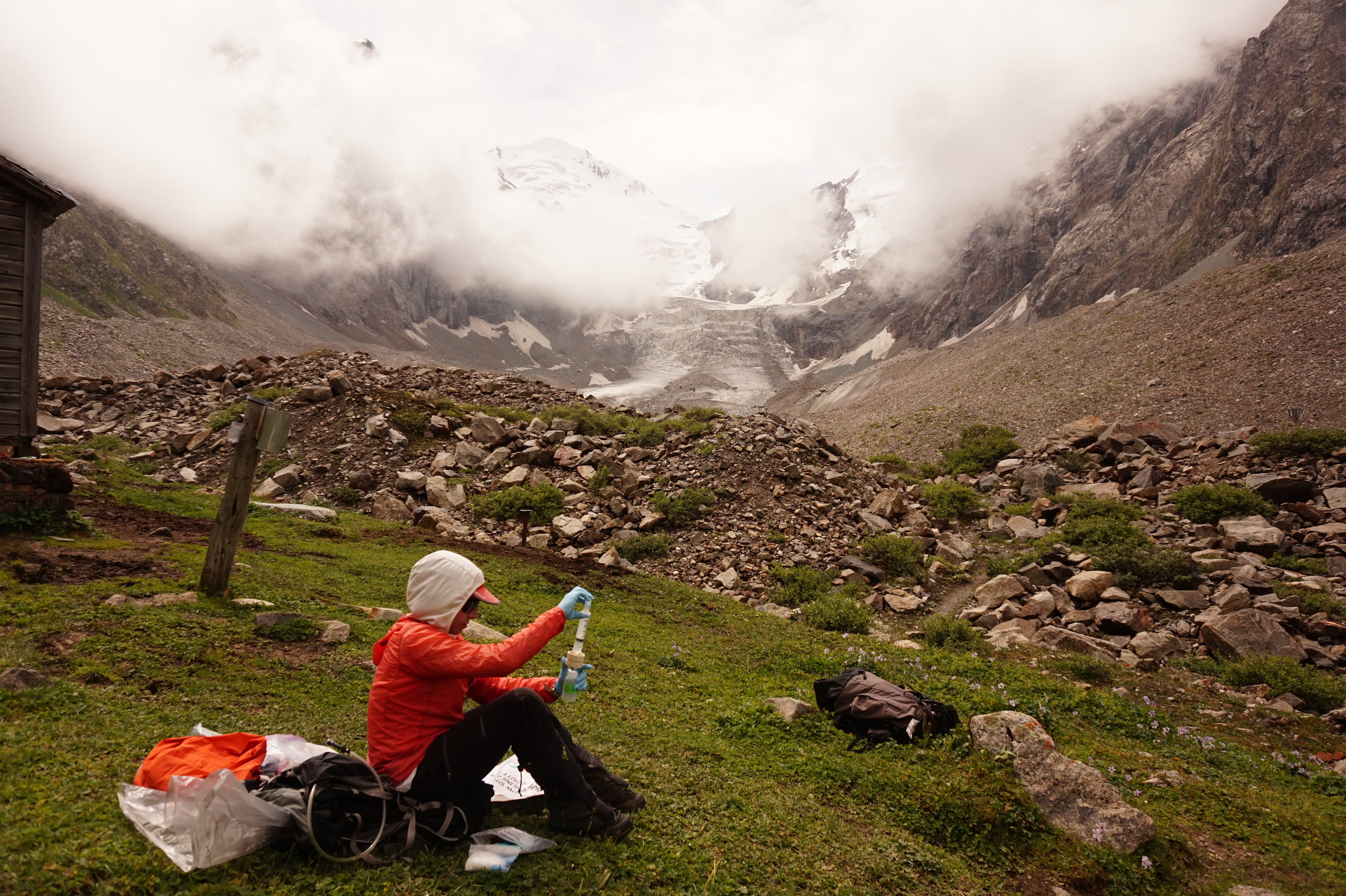 “I have always self-identified as an outdoors person who had quantitative skills—as opposed to some engineers who see themselves as a scientist who happens to enjoy rock climbing,” said Hill. “I feel at home in the mountains.”

Hill, who successfully defended her Ph.D. thesis this fall, has worked in the icy alpine and the balmy tropics, striving to understand critical hydrological controls in remote mountain river systems. She advocates for science that can support water sustainability and river conservation in regions undergoing rapid development, or in places where water supplies are prone to change due to increasing temperatures.

Throughout her career, Hill has relied on her love for the outdoors to fuel her passion for scientific exploration in remote mountain wilderness. Next year, she’ll start as a postdoctoral researcher at the National Snow and Ice Data Center.

Hill studied engineering at Rice University in Houston, Texas. But in that world of laboratories and computer models, she craved the outdoors and found herself continually looking for outdoor field work that was less available.

Many of her undergraduate peers were applying for oil and gas internships in their time off from school, but Hill found something different: guiding whitewater trips on the Arkansas River in Buena Vista, Colorado. 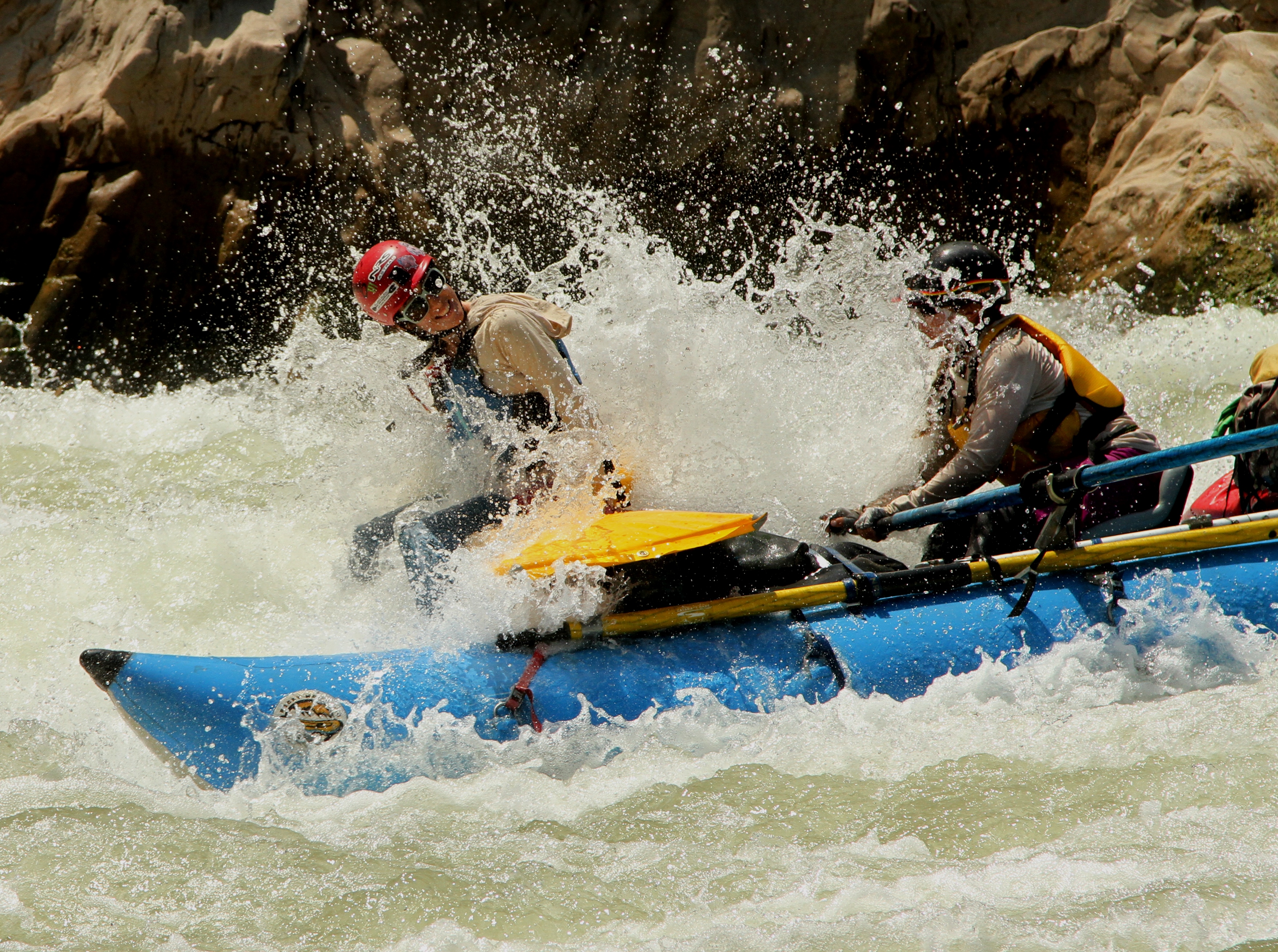 There, she fell in love with river systems. “The experience was invigorating. We paddled all day and lived out of our pickup trucks,” said Hill. “It was a lifestyle: a community focused on a river.”

Hill began her master’s program in 2011 at CU Boulder. She was still in Engineering, but this time with a focus on water resources, inspired by summers boating on the Arkansas and the subsequent seasons in Costa Rica, Chile and Tasmania. She continued her connection to the wilderness as an outdoor educator for the National Outdoor Leadership School (NOLS), traveling around the globe: from the glacier-topped mountains of Alaska to the remote forests and icefields of Patagonia and the untouched wilderness of New Zealand.

Following her Master’s, Hill transitioned to the Geography department to continue her education at CU Boulder. Her Ph.D. work focused on climate change-induced water vulnerabilities, and she has just published a paper exploring the social and environmental impacts of water pressures in the Naryn River Basin, Kyrgyzstan (Central Asia).

Meltwater from snow and glaciers plays an important role in water supplies in Central Asia, she found. Even groundwater is recharged primarily from meltwaters, and that means that a warming climate may have big impacts on the agricultural communities downstream that rely on the water. In Kyrgyzstan, Hill and her colleagues not only conducted physical science, studying water's isotopes and hydrochemistry to learn about its origins, they also interviewed people living in communities along the Naryn and Naryn basin water managers, to better understand the drivers behind water stress in the region. 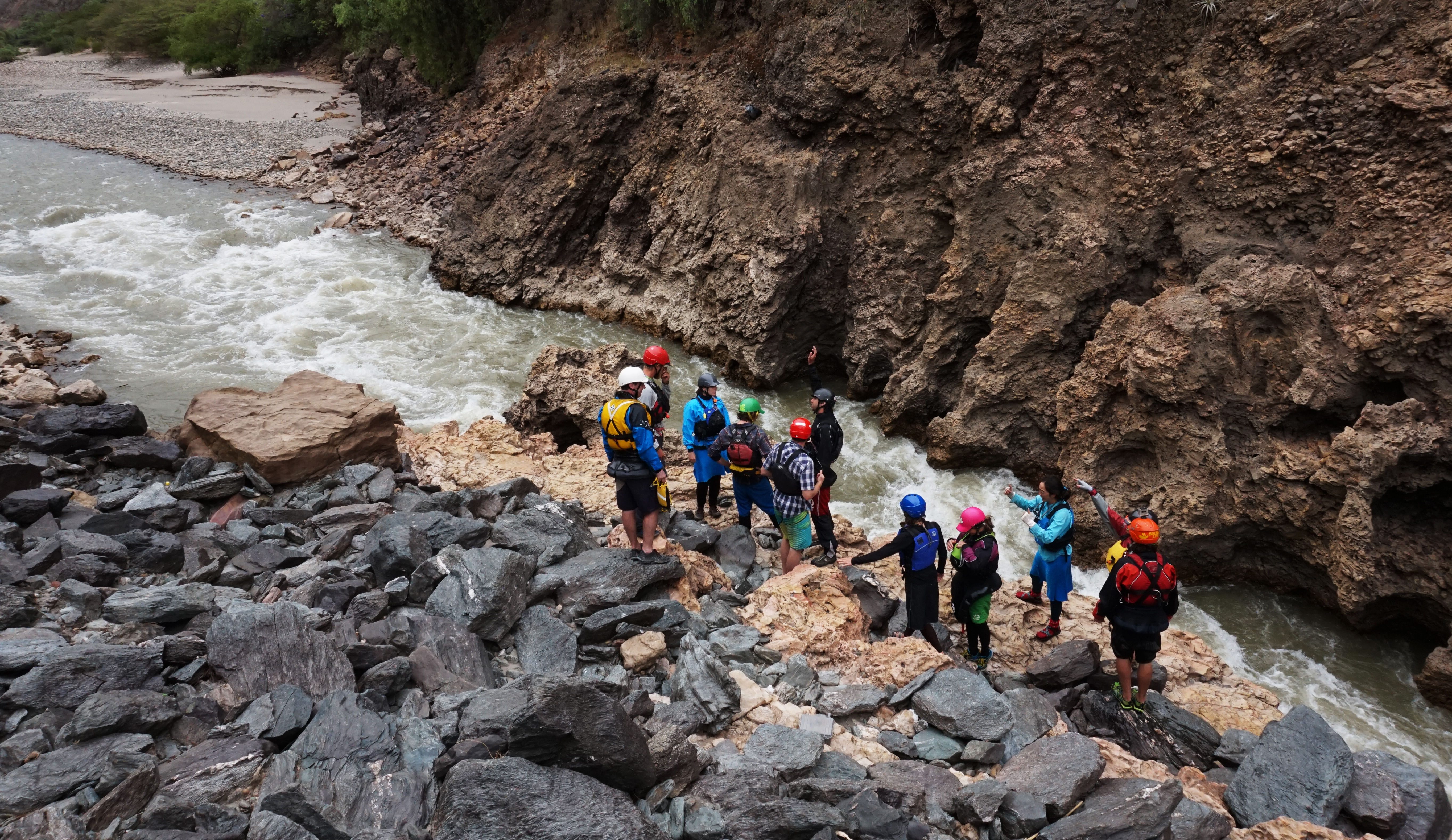 THE TEAM SCOUTS THE NARROWS OF THE RIVER. PHOTO: CHRISTIAN MARTIN

In 2015, she found herself in the tropics: the Marañón River, a headwater stem to the Amazon that starts high in the Andes and flows to the jungles of eastern Peru. With a team of friends and colleagues, Hill spent 30 intense days on the remote river. The trip gave Alice and the team of interdisciplinary scientists the chance to collect the first environmental baseline dataset on the Maranon River across the entire alpine-to-jungle transition zone.

The upper reaches of the Marañón, known as the "Grand Canyon of the Amazon," are facing pressure from hydropower development: Several proposed megadams could severely affect wild and remote ecosystems along the river, and the people who live and farm along its banks. More importantly, dams would compromise the water, sediment and biologic transport functions of rivers that bring these resources from high in the mountains to globally important resources like the Amazon delta. Local farmers also rely on the flow of the river to grow and harvest crops.

Originally, the team was motivated to experience the river as boaters before hydropower severely altered it. But soon, Hill and her friends were recruiting Peruvian and other scientists to conduct a longitudinal river study, from hydrology to ecology. They planned to take a scientific snapshot of the system, turning a trip to explore the potential final years of a threatened river corridor into an expedition to complete the first-ever longitudinal study of the Maranon river. 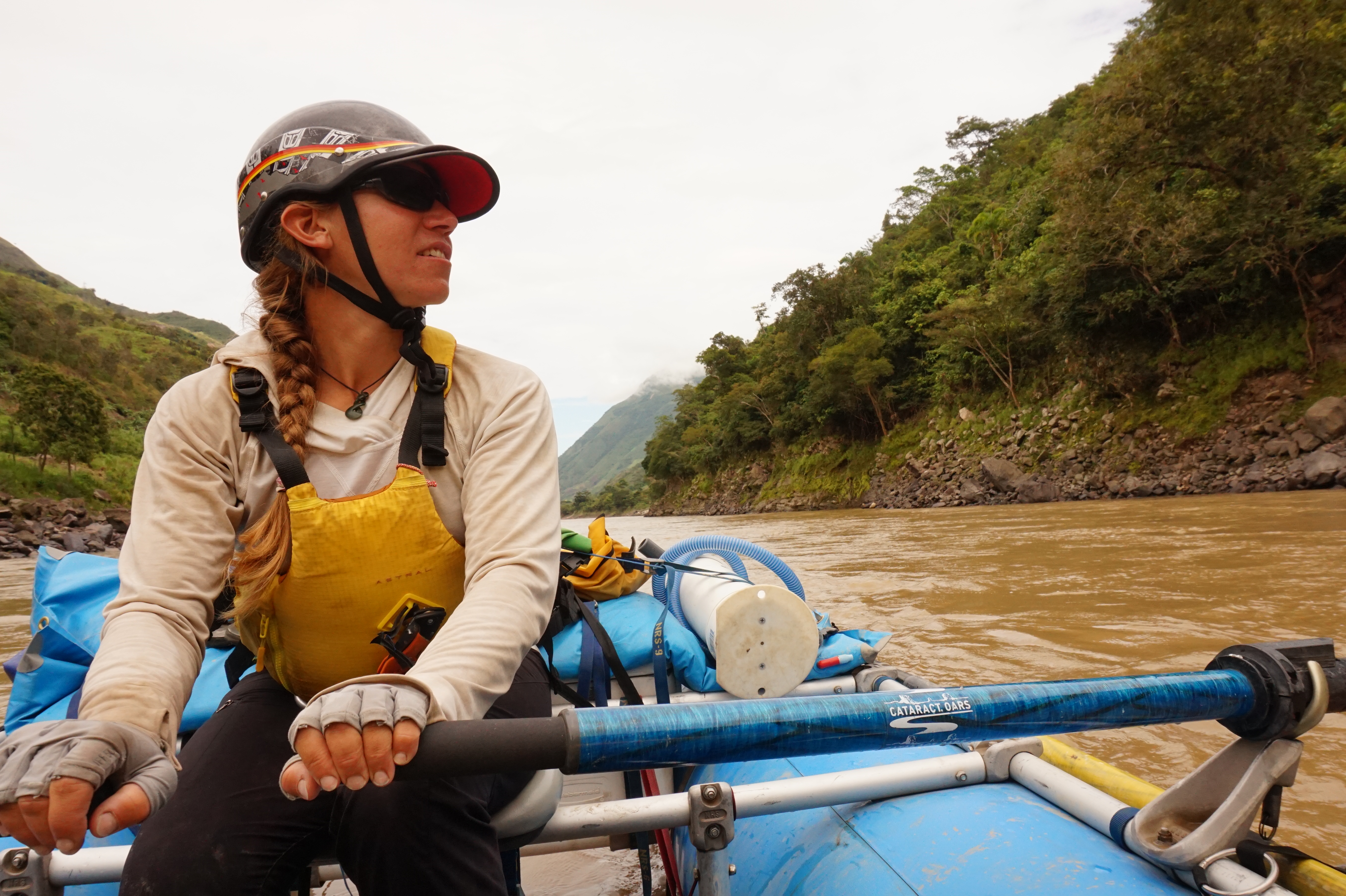 Soon, Hill, two fluvial geomorphologists, two Peruvian biologists, and 10 other professionals and outdoor experts had packed boating and research gear into five rafts and eight kayaks, and launched on the Marañón. Videographer Henry Worobec documented their journey in a film entitled, “Confluir,” now screening around the world at film festivals.

While rowing a raft, Hill collected river samples along 620 km of the river system. She sterilized and filtered the samples on-site, and carefully packed them away for later analysis in INSTAAR’s Boulder lab. Direct experience with the river via boat travel allowed the research team to take an intimate look into the ecosystem.

“A river is a conduit for science”, said Hill. “While in a boat on the water, you have continuous access to what you are studying. It’s a special mode of transport.”

The trip was not without its risks. “There’s a relatively isolated tribe in the region, the Awajun, that has historically defended their territory from outsiders. We had heard stories about their present-day beliefs that pale-skinned people can steal a child’s soul by looking into their eyes: the sort of stuff you read about in legends. There were also recent incidents with scientist groups being detained for days by Awajun communities,” said blue-eyed Hill. “This was one of those expedition factors that I had no previous experience with, where we didn’t know how to evaluate the risk and make conservative decisions. I lost a fair amount of sleep over this, being nervous that as an expedition we were being too bold and not appropriately respecting this risk.”

In the end the team focused on deliberate group decision making processes and engaged an Awajun translator to manage moving through the Awajun territory. Still, on occasion, they witnessed parents covering their small childrens’ eyes to avoid eye contact.

The Marañón is the headwater source of the Amazon River. The ecology and agriculture of the surrounding region rely on its flow. Installation of large hydropower dams would segment the river and interrupt this continuum, said Hill.

Hill returned home to Boulder with a novel dataset in hand, and she set out to determine what factors control the flow of the Marañón River system—and relied on a network of collaboration among USGS, CHARIS, and CU Boulder mentors and colleagues to navigate the analysis.

Her findings comprised another chapter of her Ph.D. thesis: The Marañón is rain-dominated at lower lying elevations because those sub-basins are impacted by moisture-rich Amazon precipitation systems, she learned. In contrast, dry season flow in the upper reaches (the site of many previously proposed dams) appear to be sourced by groundwater stored in massive alpine wetlands. The size and health of these wetlands is tied to meltwater inputs from glaciers, implicating an indirect impact to river flow from the rapidly disappearing Andean tropical glaciers.

Her analysis echos recent policy recommendations to use a “holistic basin planning” approach to protect some functions of the river system in the wake of development pressure.  Specifically, protection of the alpine wetland reservoirs in the Andes may have far-reaching effects for long term flow sustainability in rivers like the Marañón. Incorporating hydrologic ground work with remote sensing and satellite data is key to accomplish this basin-wide planning goal. 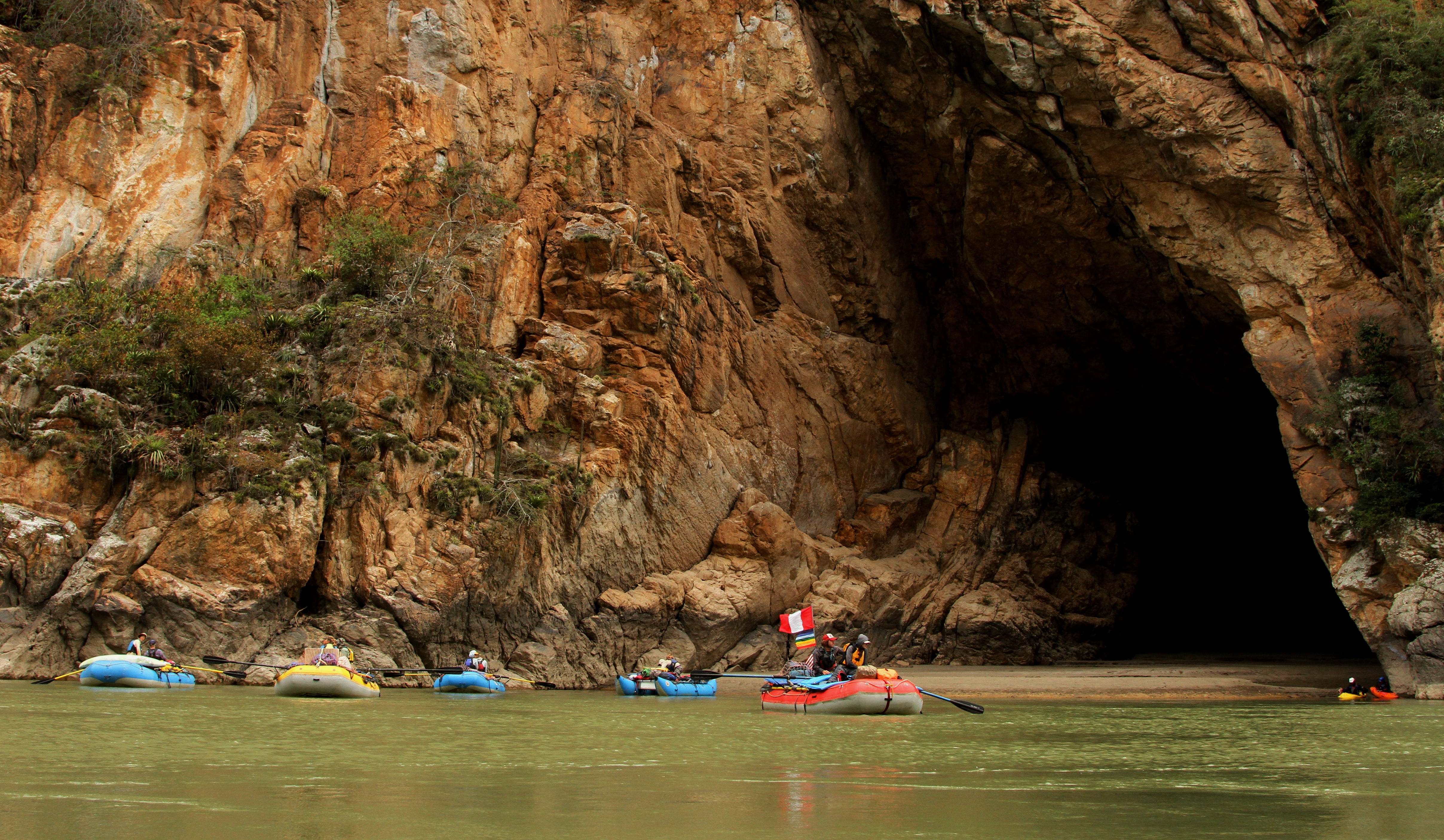 When thinking about her Ph.D. work, Hill said she was grateful to have been able to collect pre-development scientific information from remote river systems. Because of her years in backcountry environmental education work, she could deploy quickly and with only the essential sampling equipment: allowing for prompt action, and ensuring the opportunity to study the system before development changed it. She plans to continue drawing on this expertise in her next endeavor.

“In a system like the Marañón, and the greater Amazon basin, it is critical to be proactive about understanding the environmental resources there. We literally don’t know what we don’t know, but we anticipate that we have a lot to lose,” said Hill. “These are systems that sustain globally important biodiversity hotspots. We may not get a second chance.”

On November 13, 2017, Hill successfully defended her thesis. She plans to begin her postdoctoral work in 2018 with the National Snow and Ice Data Center, where she will focus on clarifying water vulnerabilities in the Pamir Mountains of Central Asia. Her efforts will be part of the CHARIS (Contribution to High Asia Runoff from Ice and Snow) project. 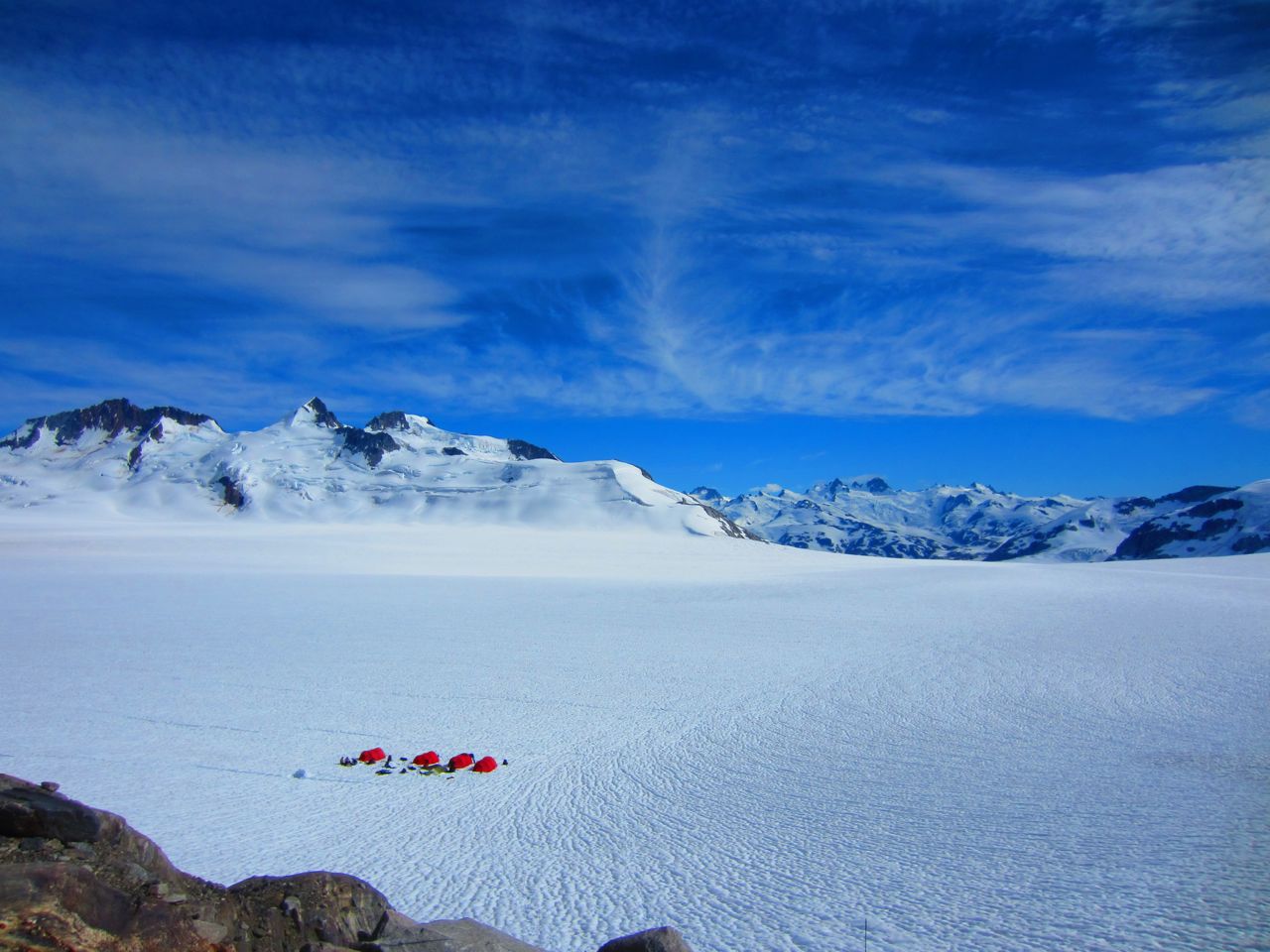