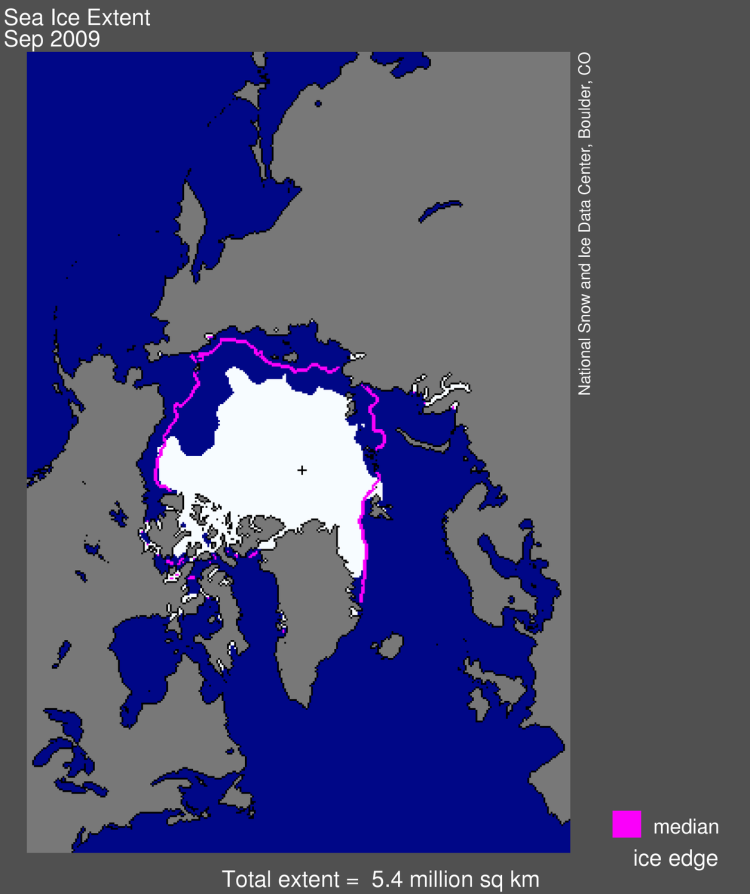 Despite a slight recovery in summer Arctic sea ice in 2009 from record-setting low years in 2007 and 2008, the sea ice extent remains significantly below previous years and remains on a trend leading toward ice-free Arctic summers, according to the University of Colorado at Boulder's National Snow and Ice Data Center.

According to the CU-Boulder center, the 2009 minimum sea ice extent was the third lowest since satellite record-keeping began in 1979. The past five years have seen the five lowest Arctic sea ice extents ever recorded.

"It's nice to see a little recovery over the past couple of years, but there's no reason to think that we're headed back to conditions seen in the 1970s," said NSIDC Director Mark Serreze, also a professor in CU-Boulder's geography department. "We still expect to see ice-free summers sometime in the next few decades."

The 2009 Arctic sea ice extent was still 649,000 square miles (1.68 square kilometers) below the 1979-2000 September average, according to the report. Arctic sea ice in September is now declining at a rate of 11.2 percent per decade and in the winter months by about 3 percent per decade. The consensus of scientists is that the shrinking Arctic sea ice is tied to warming temperatures caused by an increase in human-produced greenhouse gases being pumped into Earth's atmosphere, as reported by the Intergovernmental Panel on Climate Change.

Sea surface temperatures in the Arctic this season remained higher than normal, but slightly lower than the past two years, according to data from University of Washington Senior Oceanographer Mike Steele. The cooler conditions, which resulted largely from cloudy skies during late summer, slowed ice loss compared to the past two years. In addition, atmospheric patterns in August and September helped to spread out the ice pack, keeping extent higher.

Only 19 percent of the ice cover was over two years old -- the least ever recorded in the satellite record and far below the 1981-2000 summer average of 48 percent, according to the CU-Boulder report. Measurements of sea ice thickness by satellites are used to determine the age of the ice.

Earlier this summer, NASA researcher Ron Kwok and colleagues from the University of Washington in Seattle published satellite data showing that ice thickness declined by 2.2 feet between 2004 and 2008.

"We've preserved a fair amount of first-year ice and second-year ice after this summer compared to the past couple of years," said NSIDC scientist Walt Meier of CU-Boulder's Cooperative Institute for Research in Environmental Sciences. "If this ice remains in the Arctic thorough the winter, it will thicken, which gives some hope of stabilizing the ice cover over the next few years. However, the ice is still much younger and thinner than it was in the 1980s, leaving it vulnerable to melt during the summer."

While Arctic sea ice extent varies from year to year because of changing atmospheric conditions, ice extent has shown a dramatic overall decline over the past 30 years.

"A lot of people are going to look at the graph of ice extent and think that we've turned the corner on climate change," said NSIDC Lead Scientist Ted Scambos of CU-Boulder's CIRES. "But the underlying conditions are still very worrisome."

NSIDC is part of CIRES and is funded primarily by NASA.