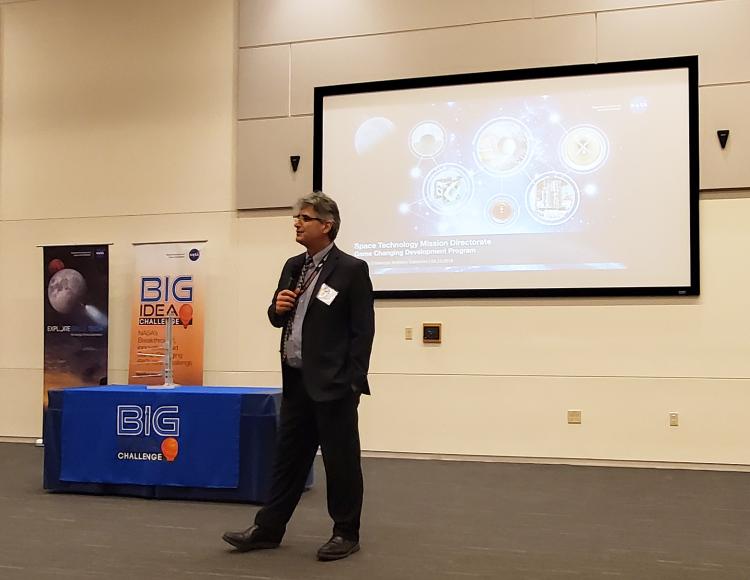 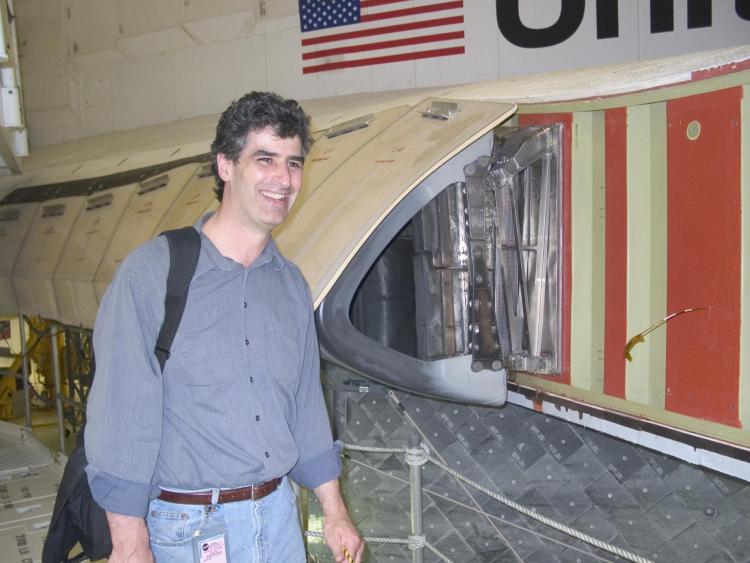 Above: Calomino recently giving a presentation for NASA. Below: Calomino at Kennedy Space Center in 2005.

You never forget your home. And for Anthony Calomino, CU Boulder will always be home.

“When people ask about my education and background, my first thought is always where I began — CU Boulder,” he said.

Calomino (CivEngr’80) manages the space nuclear technologies for NASA’s Space Technology Mission Directorate. In that role, he guides the agency’s advancement of space nuclear fission power and propulsion capabilities to meet near-term human exploration missions to the Moon and Mars, as well as for future robotic missions.

It’s his latest post in a career with the agency that began in 1985 and primarily focused on durability analysis and damage modeling of high-temperature materials and composites. Since around 2016, his area of focus has been in nuclear fission technology development.

Calomino joined NASA at a critical time, when the agency was becoming interested in advancing ceramic and refractory composite systems as heat-tolerant materials for use in aerospace vehicles. That type of research matched well with his foundational education in structural engineering.

From there, Calomino completed advanced degrees from Case Western Reserve University in engineering mechanics and Northwestern University in materials science through NASA initiatives. During that time, Calomino also served in many research leadership roles across the agency while developing, testing, and applying various heat-management systems for use in high-profile missions.

“That early experience with refractory composite systems for gas turbine engines led to working with hypersonic cruise and atmospheric entry vehicles where the external vehicle temperature is a big design concern,” he said. “Over the years, I began working on inflatable decelerators, which are essentially large, temperature resistant, inflated structures used as the heat shield to protect vehicles entering planetary atmospheres. Actually, NASA is currently using the inflatable decelerator as the baseline entry system for human exploration of Mars.”

Calomino is a Colorado native and was one of the first in his family to earn a college degree. He originally wanted to be an architect because he liked working with his hands and was fascinated by large, complex structures such as bridges. 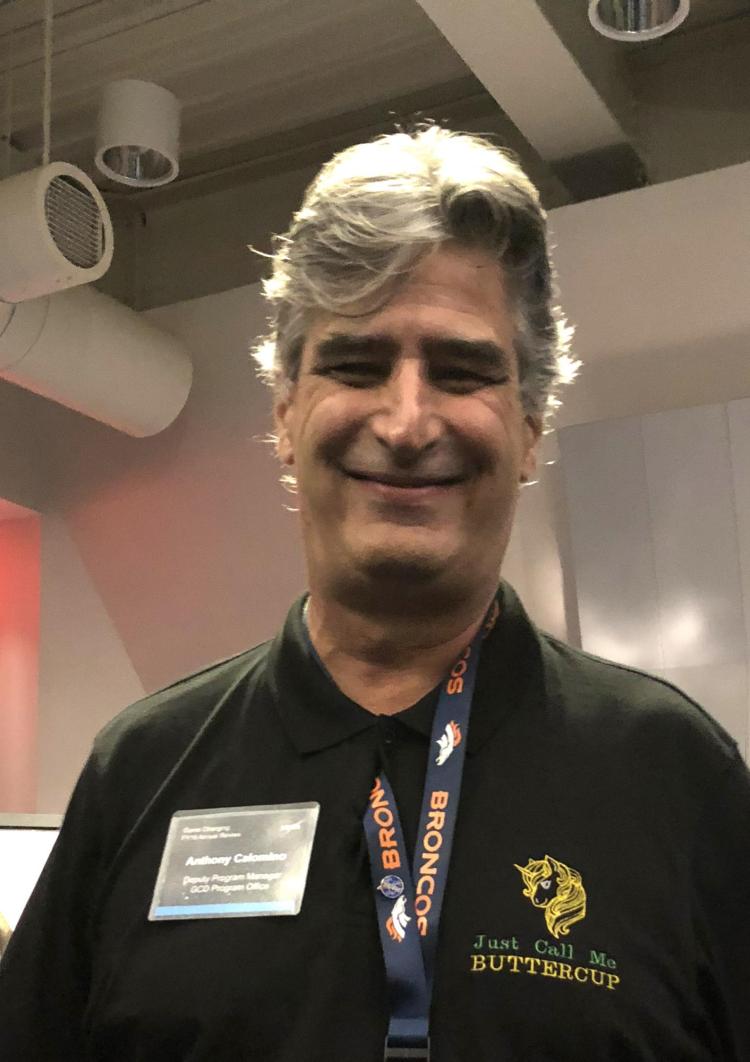 The Department of Civil, Environmental and Architectural Engineering provided a tangible entry into that field, showing him how math, physics, and various engineering design tools combine to make those structures possible and make them last. He said he found CU Boulder’s engineering program intimidating and demanding, but that there was an underlying electricity and energy about being in the program that propelled him forward.

After graduating, he accepted his first engineering job as a deep foundation engineering consultant with GRL Engineers Inc., in Ohio. It was an attractive early opportunity because he would be able to analyze stresses and stress waves in large structures using computational methods, a developing technological resource in engineering fields at that time.

A grant and research partnership with nearby NASA Glenn Research Center eventually led to a position with the agency in 1985, allowing him to pursue his key professional interest — how materials fatigue, fail, and change under extreme loading conditions and environments. Calomino eventually transferred to the NASA Langley Research Center in 2011 to lead the inflatable decelerator materials and structures development.

At first, Calomino said he did not realize how strong the undergraduate education he earned at CU Boulder was, but that changed quickly after he began his career.

“I paid to put myself through school, and I always had this idea that East Coast schools had an advantage in quality, but after moving east and working in engineering, I found that was just not the case,” he said. “Once I started working with other engineers, I found I was equally capable as anyone else. I realized how well prepared I was, and that was because of my time investment and learning opportunities at CU Boulder.” 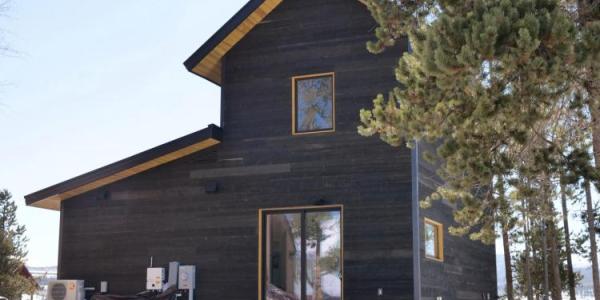 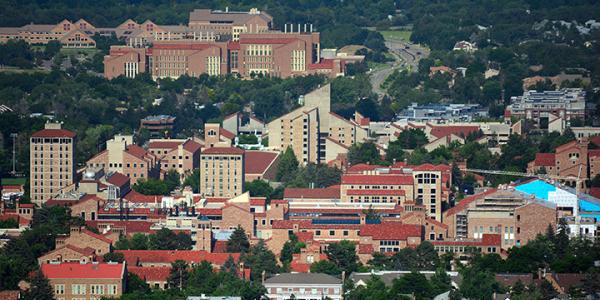 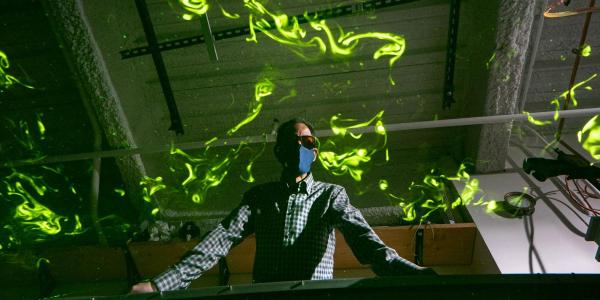