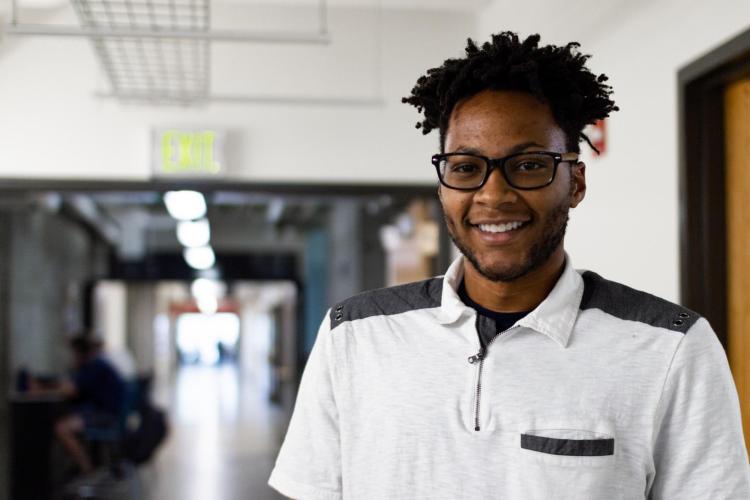 Mario Hanson graduated from CU Engineering in the class of 2021 with a degree in civil engineering and a minor in engineering management. While his first year challenged him, it was in his fifth year of school that his passion for engineering ignited.

In his last year, he was able to focus on his minor and received a scholarship as part of the Kiewit Design-Build Program. If Hanson hadn’t taken a fifth year, he wouldn't have received the scholarship, which ultimately led to his job with Kiewit after graduation.

His interest in civil engineering began in high school when he became fascinated with looking at roads, structures and historic buildings and wondering how they were put together.

“How are these standing the test of time? I look at old historic buildings or beautiful concrete bridges from the 1930s and all these different kinds of structures and designs, and there’s a story behind them,” Hanson said. “I want to see how things today are being created, and I want to see the process behind it.”

His curiosity led him to pursue civil engineering in his first year at CU Boulder. The plan was to graduate in 2020, but his first year was more challenging than he expected.

“Freshman year was really one of the most important parts of my entire education,” he said. “Sometimes the first year is the most difficult year because it took time for me to learn and understand what it meant to grow in knowledge.”

Fast forward to Hanson’s last year, when the Kiewit Design-Build Program was first introduced in his Professional Issues class. He was attracted to the program because of its flexibility. Hanson describes Kiewit as a unique company with many different jobs that are tailored to each individual’s skills and talents.

As part of the scholarship program, Hanson began on-site visits to places like the central I-70 site and drainage pump facility. The Central 70 Project will reconstruct a 10-mile stretch of I-70 between Brighton Boulevard and Chambers Road, with Kiewit as the contractor.

Those field trips provided a clearer picture of life as an engineer. It was important for someone like Hanson, who is interested in the design aspect, to understand the work happening in the field. He also visited one of the Kiewit training facilities for more hands-on experiences, where he got to weld for the first time.

Because of the pandemic, the field trips were even more valuable as classroom experience was limited. It gave Hanson insight into what he wanted to do for his career.

Things came full circle in Hanson’s senior design class, where the project for the year was centered on the Central 70 project that he had visited with Kiewit. Hanson credits this class for opening his mind to all the ways to be creative in engineering, a moment that didn’t come until his last semester senior year.

“I had this mindset around engineering that it had no creativity involved because things have to be done a certain way,” he said. “Throughout my years at CU Boulder, I learned that I have the power to help the world using my creativity and apply it in a way that is not only going to help others and be economically beneficial, but also in creative ways that people may not have seen before. I want to do something like that.”

It was a mentor in the Kiewit-Design Build Program who told him about a job he’d never heard about called Roadway Design Engineer, which ended up being the path he took after graduation. Hanson will be working in-person at the new Kiewit location in Lone Tree, Colorado.

“Even though I graduated in five years, I made the most of it,” Hanson said. “I got to take lighter credit loads to maximize efforts. Some people might see it as a weight, but I see it as an uplifter.”