Cover Image: Clark Lindsay, his wife Lori and their daughter Kate stand next to the BOLD Center huddle room recognizing the family and Pacific Program Management's contribution to the center. Photo by Tatjana Chenoweth. 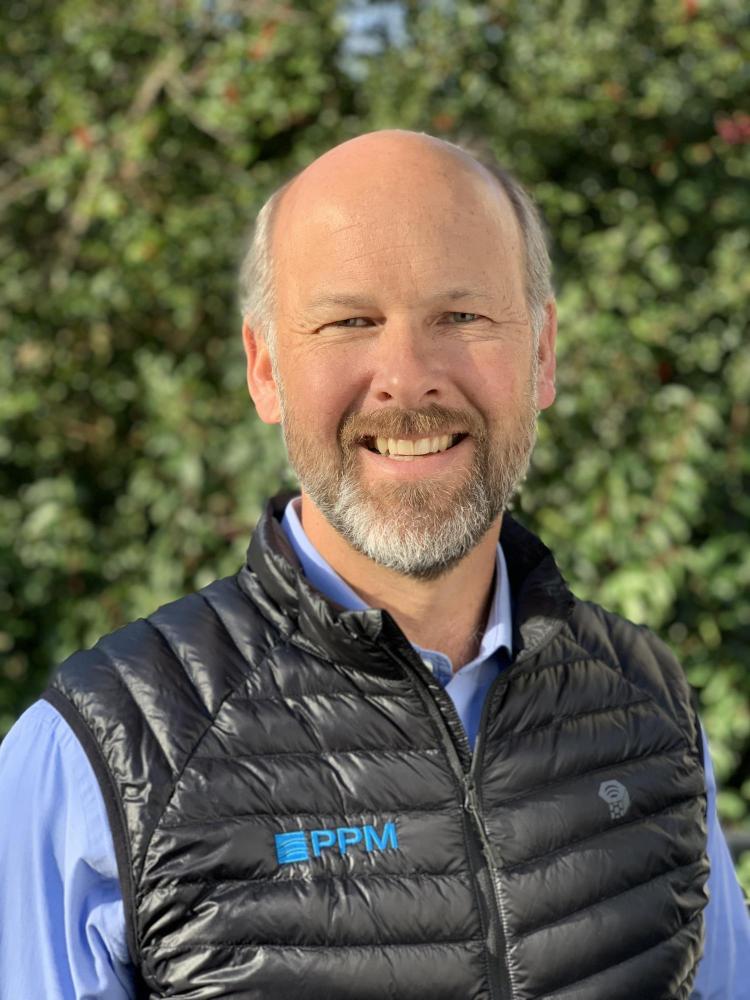 Clark Lindsay (CivEngr'96) is the founder and CEO of Pacific Program Management. With 100 people at 16 locations across the U.S., PPM draws major clients to its commercial real estate services through its people-first focus.

The company’s personalized approach helps organizations reimagine the potential of people in workspaces. PPM offers workplace consulting, capital project management, and transition and relocation services that work for their clients.

As Lindsay reflects on his journey, his biggest takeaway is that it takes diversity to build a great team, perseverance to push through setbacks, and continuous learning to make the most of your successes.

"That learning process set me up for where we are today,” he said “I believe everything's about compounded learning. If you don't learn from your mistakes, you're going to continuously trip over yourself."

From an early age, Lindsay was made aware of engineering by his parents. His father was a commercial real estate developer and his mother was a professional interior designer.

"Growing up, I was lucky my parents gave me the perspective of the real estate and design industry, which fueled my love of building things, and then led me to engineering and construction," he said.

When he arrived at CU Boulder's civil engineering department, he found it to be a challenging program. He had to build his resilience and determination – his "grit" – to make it through. He would later rely upon that grit and the keen analytical skills he honed at college to break down problems and push toward solving them.

After graduating, he learned another lesson. He went to work for a company that laid him off just 6 months after hiring him due to a stalled project and his low seniority. The blow made him consider deeply what all members of a team bring to a company and the value of different mindsets when solving problems.

Following that experience, he worked for large general contractors and commercial real estate project management groups, growing professionally to the point where he was leading initiatives valued at hundreds of millions of dollars. Then, in 2009, he pivoted.

Lindsay wanted to channel his entrepreneurial spirit into a place where he could use the knowledge that he had built to bring new ideas to bear. He traded comfort back for grit and started his own company, Pacific Program Management.

With Pacific Program Management, Lindsay used what he had learned from previous years experiences.. He saw that your team is the most valuable part of your company's workflow and that your clients deserve to have their problems understood fully, in order to match their needs.

One of the things Lindsay realized was that you need people on your team who have different life experiences, because then you have more places to draw solutions.

"The fun thing for me is that every day I learn something from our team,” he said. “New talent comes in, people have different perspectives, and that's why diversity is so important. Different perspectives on how we approach things are essential to how we solve problems.”

In many communities, however, engineering and real estate development aren't fields with a simple path to entry for all people.

He saw that, while he had benefited from his parents' understanding of what a job in commercial real estate and development looks like, there were other communities where kids don't have those signposts.

"We don’t have enough diversity in our industry to represent the diversity of clients or communities we serve. You want kids from all backgrounds to have fair access and opportunity to experience an education, so that they are well-positioned to succeed. We want students to have the opportunity when they're getting out of school, where they can recommit those opportunities back into their communities. Then they are the generation that fosters the next generation. The change is in the long term, but critically important," he said.

Lindsay said he believes that we need to build long-term investments to create pathways. His goal is to support a future where diversity is in the fabric of industry and not an add-on.

As part of this work, he recently donated to the Broadening Opportunities through Leadership and Diversity (BOLD) Center to strengthen the center's programming and holistic student support for students underrepresented in engineering, so that they can become that representation for the next generation.

Tanya Ennis, the BOLD Center Director said, “We appreciate Clark’s recognition and understanding of the power of diversity, the need to create long-term pathways for students from underrepresented communities, and the generous donation to the BOLD Center to provide holistic support to these students. We, the BOLD Center team, thank you for your gift.”

(Alexandra) Grace Wilson is a content and communications specialist for The BOLD Center and Computer Science in the College of Engineering & Applied Science.