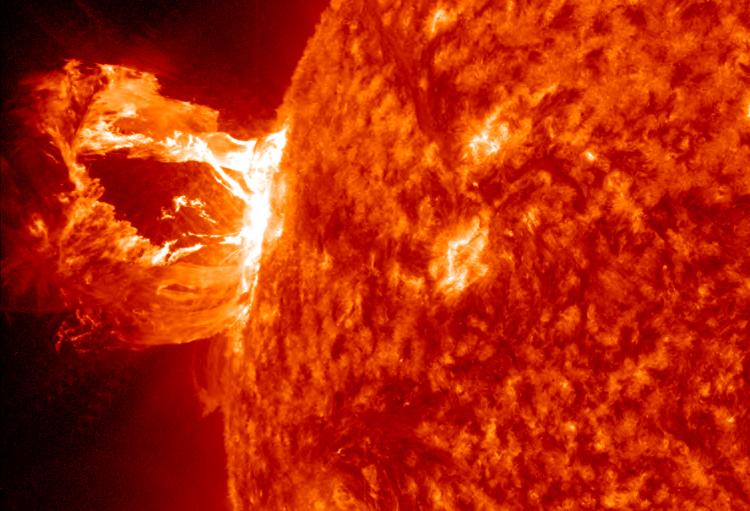 Berger, the executive director of the University of Colorado Boulder Space Weather Technology, Research and Education Center, is leading a team that has received a two-year, $496,000 grant to design a better forecasting system for solar magnetic eruptions on the sun.

These events lead to solar flares and coronal mass ejections that can wreak havoc on radio communications, endanger satellites in low Earth orbit, and even destabilize the electric power grid here on Earth.

“Up to very recently, there have only been subjective tools, human forecasters who view images of sunspots and use historical data tables to say, 'The probability of this sunspot flaring in the next 24 hours is X%',” Berger said.

A 24-hour range for solar eruption forecasts is about the best a human forecaster can do with current technology. Berger’s team and several others around the world have already developed systems that can match the skill of those forecasts using real-time data from the sun’s magnetic field, but he says better tools are necessary to help satellite and technology companies.

“It’s one thing to give a low-confidence 24-hour forecast. Most customers won’t act on those. And by the time the solar flare alert goes out after the eruption has started, it’s often too late to take protective actions. We want to develop a high confidence eruption warning with a 3 to 12 hour window to enable decisive and timely action by users who will be impacted by the ensuing solar flare and CME,” Berger said.

There are constant micro-eruptions occurring within sunspot active regions. Scientists have long noticed that they seem to increase prior to larger flares and coronal mass ejections, but it has always been a merely anecdotal observation. Artificial intelligence could change that.

“Humans have looked at these movies of the sun for years, but there’s so much going on. It’s so complex, no one could view these multi-wavelength movies and detect a pattern. A machine learning system can,” Berger said.

The catch? It is a lot of data to analyze, far more than a workstation computer could handle. Extra horsepower is needed. The team has that covered; one of their research partners is NVIDIA.

Although the company is primarily known by the public for computer graphics hardware used in high-resolution video games, their technology is also often used in artificial intelligence research.

“They are very interested in scientific applications of their technology,” Berger said. “This work is in the realm of video prediction using ‘space-time convolutional neural networks’, which is being developed for autonomous vehicles -- what’s happening now and what could happen next. We’re exploring if the same concepts can be applied to the sun.”

Development is already underway. Once the system is ready, they will begin to train it using video footage from NASA’s Solar Dynamics Observatory, a satellite that has spent the last ten years shooting continuous video of the sun.

The system will analyze the footage, looking for spatio-temporal patterns that may precede major eruptions.

“This is all very experimental,” Berger said. “But it could have a lot of utility if it works. There’s a real need for an accurate and timely warning of an impending solar eruption.”

In addition to Berger and NVIDIA, additional partners on the grant include Elizabeth Bradley, Varad Deshmukh and Claire Monteleoni in the Department of Computer Science, Natasha Flyer and James Meiss in the Department of Applied Mathematics, and Bala Poduval at the University of New Hampshire.