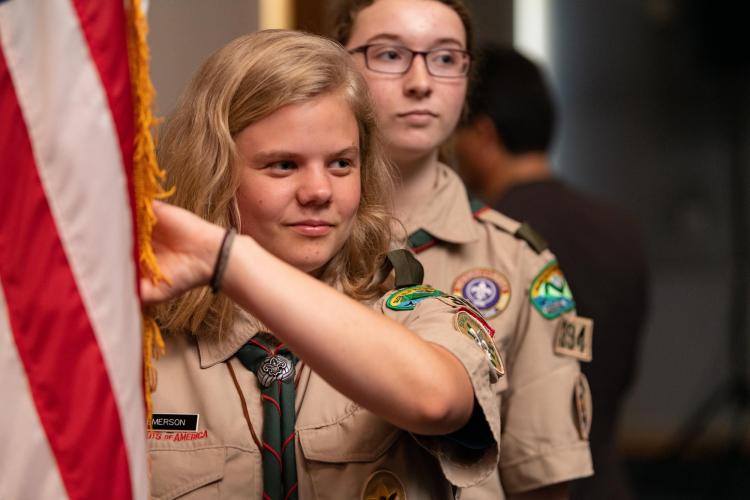 When the Boy Scouts of America opened membership to girls in February 2019, CU Boulder engineering undergraduate Emerson Domke jumped at the opportunity to join. Nineteen months later she became the first woman in California’s Bay Area to complete the Eagle Scout program, earning her a place in the nation’s inaugural class of female Eagle Scouts.

By peer nomination, Domke was also inaugurated into the Order of the Arrow, scouting’s National Honor Society.

What earning the Eagle Scout status means to her is being a part of something that is larger and has a long heritage.

“It’s an honor,” she said. “It’s being involved in a community throughout the country. Having Eagle Scouts in my family and as friends is a great connection.”

It seems to Domke as if she has been preparing to become an Eagle Scout for most of her life.

She was a Girl Scout for eight years. And with several family members who are Eagle Scouts, including her father, brother and a number of uncles, Domke was inspired to blaze her own trail in the 100-year-old tradition.

“From day one I made a Gantt chart of everything I had to do, a list of merit badges and activities and camping trips I had to go on to earn the Eagle Scout,” she said. “It has to be carefully planned out. You can’t just decide to do it and expect to finish quickly.”

Domke’s diligent attention to her meticulously mapped-out schedule resulted in her completing all tasks in just 19 months and six days, an impressive achievement, according to her scoutmaster and mentor, Bruce Lee.

“Emerson came to me in November 2018 with a Gantt chart of how she was going to accomplish her Eagle,” said Lee, who has been a scoutmaster for more than 25 years. “That included her going off to college. It did not include a pandemic and having to come back and do virtual learning. It’s amazing. I’ve never seen anybody do it that fast. The average time has been about six years. Kudos to her for coming up with that schedule and being able to think it all the way through and execute it.”

Since opening its membership to girls in February, 2019, Boy Scouts has been renamed Scouts BSA, a change meant to welcome both boys and girls between the ages of 11 and 18. 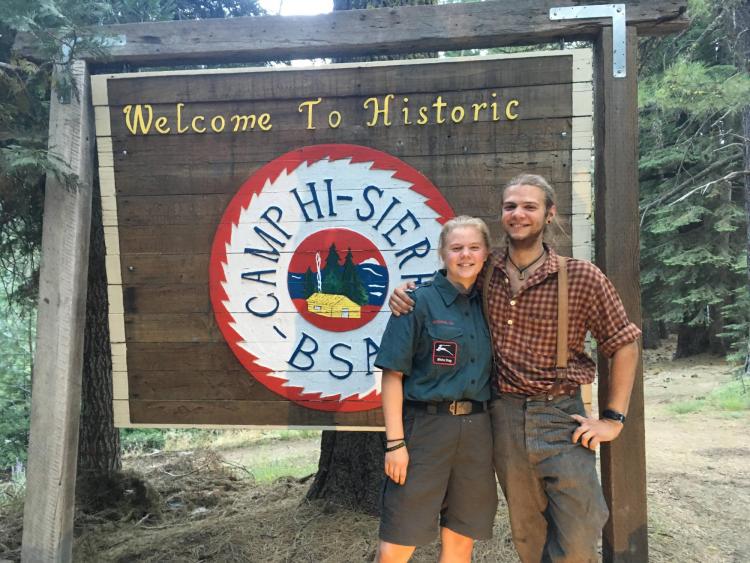 Emerson Domke and her brother, also an Eagle Scout, at Camp Hi Sierra.

“Seeing Boy Scouts and other troops made me really want to join and earn an Eagle Scout,” she said. “Scouting is not girls interacting with a Boy Scout. We’re simply two Scouts interacting with each other and learning the same things.”

One of the scouting activities Domke has enjoyed the most has been the camping and backpacking trips in Yosemite National Park and other parks in California. She has also volunteered as a camp counselor at Camp Hi Sierra in California for several years, directed by Lee.

“I’ve been active in Scouting over 45 years,” Lee said. “It should have been co-ed a long time ago, so I’m glad it’s totally inclusive now. I’m looking forward to seeing what these women coming in are going to bring to the program.”

A sophomore in mechanical engineering, Domke expects to have a career in aerospace. Her dream, however, is to be an imagineer for a Walt Disney theme park, working behind the scenes at the “happiest place on earth.” Imagineers are the visionaries and designers who create experiences of magic and wonder for Disney.

“Being an imagineer mixes creativity and the engineering,” she said. “Creating things people haven’t seen before, which is cool. Creativity is an important part of engineering.”