A gift of $2 million from the Mortenson family caps an impressive year of growth for the Mortenson Center in Global Engineering, including new federal and nonprofit funding totaling more than $11 million and significant research findings.

The Mortenson Center is a signature program of the College of Engineering and Applied Science at the University of Colorado Boulder. It promotes the role and skills of engineers in identifying and addressing unequal and unjust access to basic services such as water, sanitation, energy, food, transportation and shelter while placing an emphasis on identifying the drivers, determinants and solutions favoring equitable access. The center was founded by Professor Bernard Amadei as the Engineering for Developing Communities program. In 2009, CU alumnus Mauritz "Mort" Mortenson, his family, and his company generously donated to the EDC program, after which it was renamed in his honor. Mort passed away in 2019.

“Mort was committed to helping others and passionate about building lasting structures. the Mortenson Center in Global Engineering connects his greatest passions by equipping students with skills they need for the future and helping communities find sustainable solutions to their needs,” said his wife Alice Mortenson.

Director Evan Thomas, an associate professor of engineering and CU alumnus, said the center is quickly becoming a globally recognized, preeminent destination for engineering students and a place that governments, business and nonprofits around the world want to work with.

“Students, partners and funders have resonated with our vision of global engineering and are engaging with us now more than ever,” he said. “Our continued partnership with the Mortenson family will further maximize our impact in key areas through training and graduating the globally minded and responsible engineers of the future.”

The following is a recap of high-impact projects and news within the center over the last year:

A CU Boulder and Millennium Water Alliance-led program committed to ending humanitarian drought emergencies in the Horn of Africa has gained support from U.S. Agency for International Development and NASA as well as recognition from leading nonprofits.

The Drought Resilience Impact Platform, or DRIP, combines the technical leadership from within the Mortenson Center and across campus with water security actions taken by the Millennium Water Alliance, national governments, and local communities in Kenya, Ethiopia and Somalia. In short, DRIP will monitor water security in these three countries, create actionable drought forecasts, and incentivize water system operations to ensure that when rains fail, water access is secure and costly drought emergencies are prevented.

The program was recently recognized as an inaugural member of the Million Lives Club, which recognizes positive impact on at least a million people living on less than $5 per day. That honor was given through a selection process by leading groups like UNICEF, Canada Grand Challenges, UK AID, and United Nations Development Programme.

It was also honored as one of the 100 top-scoring finalists in a challenging vetting process from the MacArthur Foundation’s 100&Change competition and at the 2020 San Francisco Design Week, with a first-place finish in the Internet of Things category. Thomas said new collaborations with the Moore Foundation and Autodesk Foundation are ongoing as well.

A $15.3 million project from the U.S. Agency for International Development to better understand how to improve the sustainability of water, sanitation and hygiene (WASH) interventions in the developing world is entering its final year. The project is focused on applying, researching and learning about systems-based approaches to improve the sustainability of WASH services from many angles and avenues.

Amy Javernick-Will, the center’s associate director for research, said the analysis for this longitudinal study is primarily focused on four cross-cutting themes and tools to determine if they increase the likelihood that water and sanitation services will be maintained. Those four themes include collective action, preventive maintenance, network analysis and stakeholder understanding. While major findings will come in summer 2021, she said there have been lots of exciting developments this year. 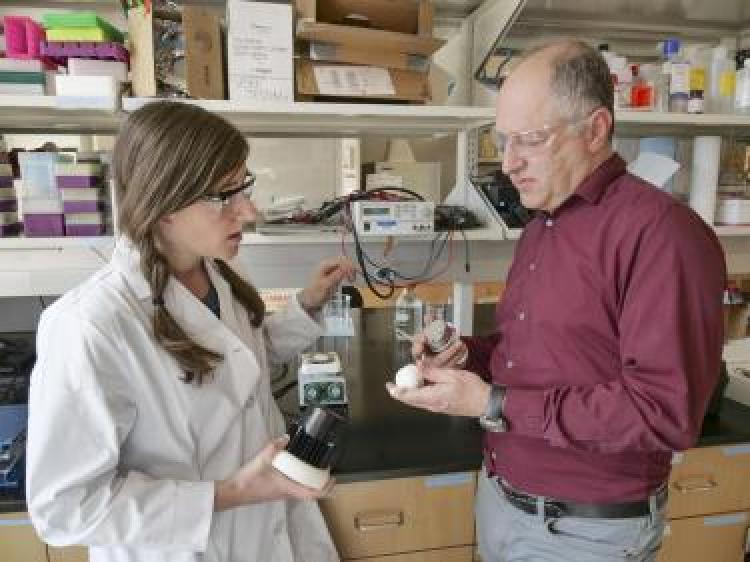 Professor Karl Linden in the lab with a student.

“We hosted a webinar in May on strengthening WASH networks in Ethiopia with over 130 participants from around the world. We also produced many interim reports, blogs and webinars on the themes, which are available on our website for everyone right now,” she said. “We have also written many briefs and journal articles that have been well-received.”

Javernick-Will was an author on one of those papers published in MDPI in March. Titled “Adapting Collaborative Approaches for Service Provision to Low-Income Countries,” the article explores the factors experts believe contribute to the success of the approaches covered by the themes and identifies how they can combine to achieve desired outcomes.

Other news from the center

Any student currently enrolled in a graduate degree program offered by the College of Engineering and Applied Science at the University of Colorado Boulder may apply for concurrent enrollment in the Mortenson Center Graduate Certificate.