How a hackathon solution inspired a problem-solver: T9Hacks and Cassandra Goodby

How a hackathon solution inspired a problem-solver: T9Hacks and Cassandra Goodby

Five years ago, Cassandra Goodby sketched out her first website mockups at the T9Hacks hackathon. Now she’s the lead organizer for the hackathon, a master’s student in the Creative Technologies and Design (CTD) track of the Technology, Media & Society program in the ATLAS Institute, and a professional user experience specialist for NIST, the National Institute for Standards and Technology. She still remembers the jolt of that initial spark.

The Hackathon is still accepting registration on the day of the event!

Where? The ATLAS Institute

A different kind of hackathon

T9Hacks was created by CU Boulder PhD student Brittany Kos in 2015 as a solution to a common problem with hackathons. As Goodby describes it, “hackathons notoriously have a very high barrier of entry. They can be very daunting, male-dominated, large and competitive events. A lot of people who are new and maybe interested in technology don’t feel comfortable with that being their first step.”

The hackathon takes its name from Title IX, the 1972 civil rights legislation that denies gender-based discrimination in federally-funded educational institutions.

T9Hacks allows students to focus on what they can actually do with technology and how following their passion can turn into problem-solving. The event helps them hone in on their creative impulses and connects them to resources and mentorship. The 24-hour structure allows a deep dive into what they can create.

To Goodby, the reward is often in the excitement: “It’s amazing to see the joy that comes from students being able to start out with nothing and to build something from scratch.”

Goodby keeps the core values of T9 hacks as a safe, exploratory space that focuses on a culture of making and solving problems more than competing. This year, the hackathon has three tracks: empowering underrepresented groups, creative technology, and early childhood education sponsored by the National Head Start Association. The hackathon will be supported by local engineers, user experience designers, 3D designers, game developers and others who act as mentors and provide technical assistance.

Part of the value in T9Hacks is also that, though it has tracks, the hackathon values individuality. Students have the freedom to build wild, off-the-wall solutions. Last year’s event saw a roomba modified to test internet connection delays and a virtual-reality bartending game, to name a few.

Creative problem-solving is also why Goodby came to ATLAS and tried out T9Hacks for the first time as a Technology, Arts, and Media student five years ago. As a transfer student, she hoped to find a community that was more focused on why coding was useful, rather than coding for the sake of coding. 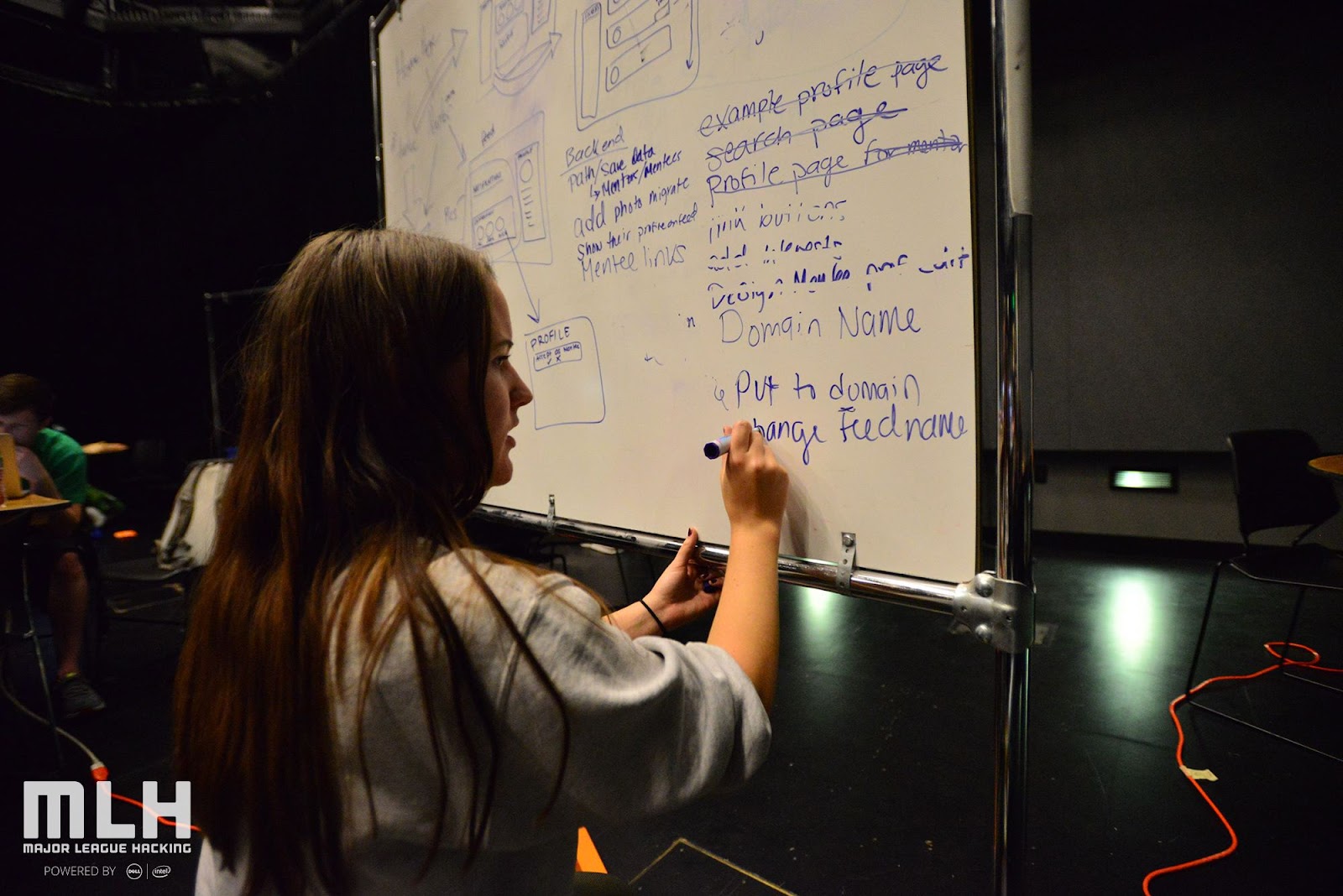 As she stood at the whiteboard, forming the map for her website, she was transported.

“It set me off on such a love of ATLAS. There I found the ability to do what I want and explore how I want to use my passions. I really enjoyed it.” Goodby said.

At the time, she became convinced that her love of coding and websites meant that she was going to be a front-end developer, but as with many projects, her goals transformed.

T9Hacks was run by Kos for three years before she moved on, and ATLAS Senior Instructor Aileen Pierce asked Goodby if she would be willing to step up to the plate as the new lead coordinator. Goodby agreed.

“T9 had given me so much” she said. “I wanted to have the legacy continue on and not let it fall through.”

Now she’s graduating, too, and her goal of becoming a front-end developer has shifted to understanding the user’s experience of technology.

After taking user-centered design classes from Instructor Arielle Hein and Lecturer Daniel Braha Goodby realized, “there’s a true, empathetic way that we can figure out what to do best for people that’s not instilling our own opinions. We can use user-centered methodology to discover what the true solution is and what’s going to benefit people the most.”

“It’s a new field, and it’s daunting to let people explore their passion and curiosity in this gray area, but I think allowing us to use technology in creative capacities is what’s going to improve it,” she said.

As she graduates this May and sets her sights on new ventures, Goodby expressed her appreciation.

“Sometimes I’m kind of shocked by CU Boulder providing such an amazing program,” she said. “I don’t think people have understood the kind of impact it has had on our lives, that we could figure out where we wanted to be, and a true love for what we do.”