After a couple months of meetings, planning and reflection, interim Dean Keith Molenaar officially began his new role this week and is feeling energized by the possibilities.

“I am thrilled to be in the job and couldn’t be more excited to have a chance to give back to the college by serving in this role,” he said.

Molenaar’s interim term started on Monday. From a transition perspective, Molenaar offers consistency and continuity when it comes to the college, campus and university vision. He is part of CU President Mark Kennedy’s Leaning into the Future strategic planning committee and served on the Strategic Vision committee that recently departed Dean Bobby Braun enacted in 2017 in addition to serving in a similar role for Dean Emeritus Rob Davis in 2007.

Molenaar said one of his top priorities is maintaining consistency with the goals, vision and culture that Braun implemented over the last three years. While his day job the past three years has been focused on improving the college’s research impact, he said the other pillars of the strategic vision are just as important.

“Embracing our public educational mission is something I feel strongly about, and global engagement has long been a passion of mine,” he said. Molenaar was awarded the CU Campus Global Citizen of the Year Award in 2017. “But one of the things that I really want to focus on is enriching our professional environment. We, as a team, make this a place where you want to work and want to be. I would like us to continue down that path.”

To that end, he said that the faculty and staff workplace climate surveys, conducted for the first time in January 2017 under Braun, and repeated in 2019, provide valuable feedback.

“It’s important to provide a forum for conversations in order to know if you are going in the right direction. I really encourage everyone to participate in the surveys or use the other avenues available to them to communicate how they are feeling about our professional environment,” he said.

Molenaar said he is also eager to foster and encourage the changes that have led to increased diversity in the student and faculty population. That means hiring a new associate dean for access, inclusion and student programs and supporting the programs, work and staff in the BOLD Center.

“Diversity and inclusion is embedded in our DNA as a college,” he said. “That is the biggest and most valuable change I have seen in my time here, and it’s important that we take it to the next level.”

Physical space will also be a focus during Molenaar’s time, specifically looking at deferred maintenance and understanding how meetings, events and student life function on East Campus. He said physical spaces create community by giving us times and places to be together and deserve continual review.

A Forever Buff gives back 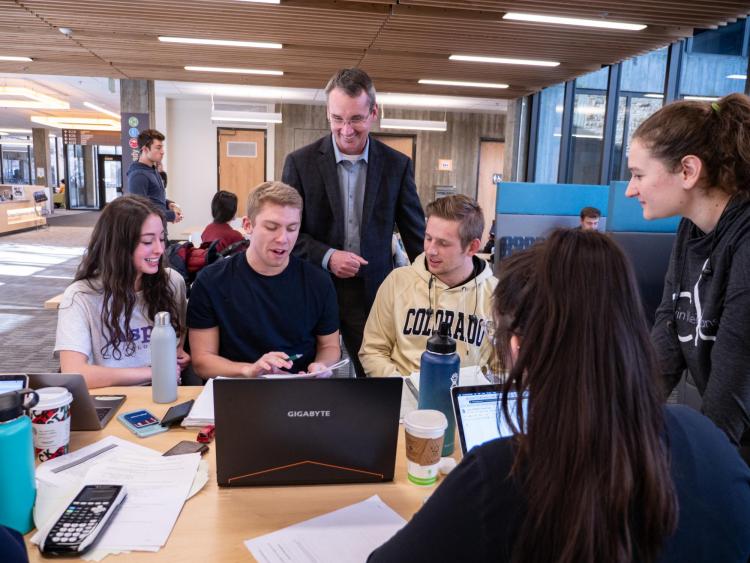 Molenaar working with students in the engineering center.

Having previously served in a number of positions in the college including professor and chair of the Department of Civil, Environmental and Architectural Engineering, the college is a place that has been key to Molenaar’s education and career, and he is eager to give back through service as dean.

His ties here date back to his time as an undergraduate in architectural engineering in the late 1980s. After working for a successful construction management start-up company, he returned to earn his MS and PhD in civil engineering in 1997. After starting as an assistant professor at Georgia Tech, he took the opportunity to return to the civil engineering faculty at CU Boulder.  He became a full professor in 2011.

Molenaar’s teaching and research focus on risk and decision analysis, construction engineering and cost estimating for buildings and infrastructure projects. That has led to work on regional projects such as the skylights over the Denver Center for the Performing Arts to international efforts like the Panama Canal expansion project and the International Thermonuclear Experimental Reactor (ITER) project in France — the project he said he’s most proud of in his career.

“We are only about halfway to First Plasma on ITER. If successful, it could bring virtually limitless clean energy with the half-life of nuclear waste that is less than 10 years,” he said.

Molenaar has just presided over three years of unprecedented growth in research funding and the development of the Interdisciplinary Research Themes during his time as associate dean for research in the college. Molenaar said the creation and execution of the Interdisciplinary Research Themes could provide a roadmap for the college going forward. As a young faculty member, he said that he was encouraged to prove his merit as a researcher on an individual basis. He said the themes counter that narrative and suggest that the college is stronger when working as a community – not just in research but at every level.

“I truly believe the reason for our growth is because the research themes bring new and existing faculty into groups that would not have existed before to work on larger collaborative research. That is an analogy for how we work better as a community,” he said. “We can only do so much individually. Together we can make this college one of the best in the world.”