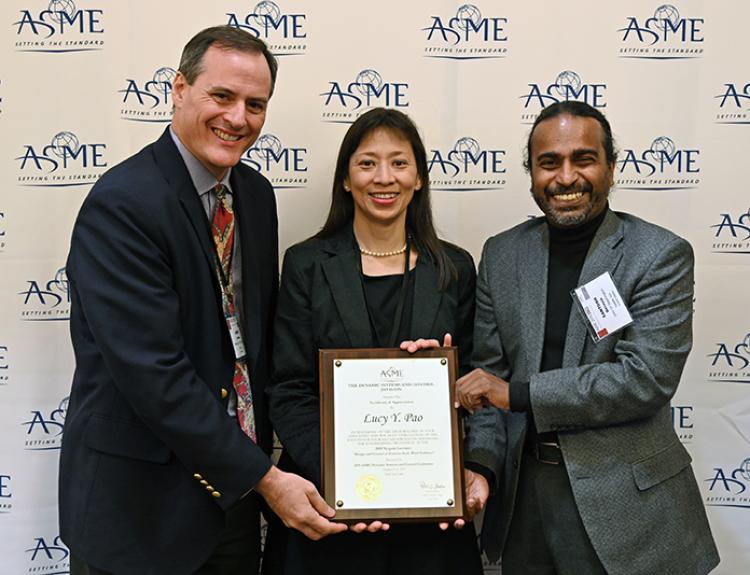 Professor Lucy Pao was recently honored as the Nyquist Lecturer at the 2019 Dynamic Systems and Control Conference, which is hosted by the American Society of Mechanical Engineers.

The award was created in 2005 to honor members working in the Dynamic Systems and Control areas, and one award is given each year. The award is named after Harry Nyquist, a gifted scientist and engineer who established what is now known as the Nyquist Stability Criterion, among other contributions to communication and control systems. As part of the award, Pao gave a plenary lecture titled “Design and Control of Extreme-Scale Wind Turbines.”

“I’m extremely honored to have been chosen for this award and to be among the distinguished researchers who have been past Nyquist Lecturers,” Pao said. “For my lecture, I chose to highlight recent results from a large interdisciplinary project on wind energy systems that I have been privileged to be a part of. My research students and collaborators on this, and other projects, have been fantastic. In many ways this award honors our collective work on challenging problems that require the contributions of many people to solve properly.”

The conference is the showcase technical forum of the ASME Dynamic Systems and Control Division. It provides a focused setting for dissemination and discussion of the state of the art in dynamic systems and control research, with relevance to mechanical engineering applications.

Pao is the Palmer Endowed Chair Professor in the Electrical, Computer and Energy Engineering Department. She is a Fellow of the Institute of Electrical and Electronics Engineers and the International Federation of Automatic Control. Her research has primarily focused on engineering control systems, with applications ranging from atomic force microscopes to multi-megawatt wind energy systems.

Abstract
“Wind energy is recognized worldwide as cost-effective and environmentally friendly and is among the fastest-growing sources of electrical energy. To further decrease the cost of wind energy, wind turbines are being designed at ever larger scales, which is challenging due to greater structural loads and deflections. Large-scale systems such as modern wind turbines increasingly require a control co-design approach, whereby the system design and control design are performed in a more integrated fashion. We will overview a two-bladed downwind morphing rotor concept that is expected to lower the cost of energy at wind turbine sizes beyond 13 MW compared to continued upscaling of traditional three-bladed upwind rotor designs. We will describe an aero-structural-control co-design process that we have used in designing such extreme-scale wind turbines. We will also highlight some of the control systems issues for wind turbines at these scales and outline selected advanced control methods we are developing to address these issues. We shall close by discussing continuing challenges and on-going and future research avenues that can further facilitate the growth of wind energy.”