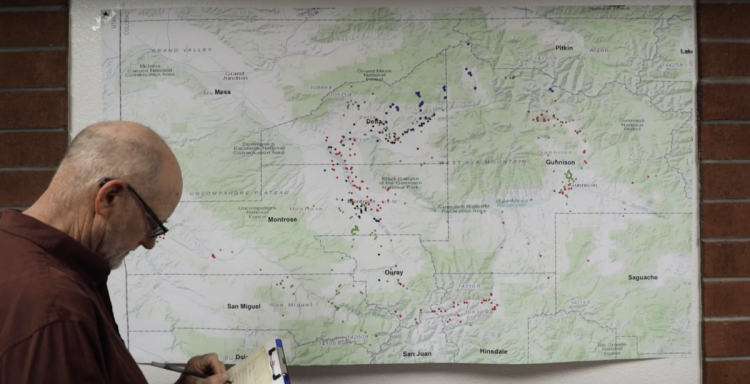 Ken Nordstrom, the environmental health director for the Delta County Health Department, looks at a physical version of the map.

Results from a new voluntary survey of private drinking water quality on the Western Slope through a partnership between CU Boulder, Delta County and the Centers for Disease Control and Prevention are available online now.

Residents can explore results through an interactive online map created by Holly Miller as part of her recently completed master’s degree in the Environmental Engineering Program at CU Boulder. The site shows locations for all the tested wells, provides links to request free testing kits and houses detailed water-quality information.

Miller’s work was partially funded through a CU Boulder Outreach Award and was a small part of a study funded by the CDC into this issue. That larger project is entering its fifth year and is led locally by the Health Department of Delta County with work being done in Delta, Gunnison, Hinsdale, Montrose, Ouray and San Miguel counties, where about half of the residents are on private wells.

Samples for the survey came from volunteers in those communities. Miller’s work was done under Professor Joe Ryan, who said the database was an important step toward public awareness. That is because water quality is an important factor in overall health, but privately owned wells are unregulated and mostly untested for things like arsenic. Putting the survey results online gives residents, many of whom rely on well water, information about their home’s water quality and that of their neighbors so they can make informed health decisions.

“With the maps she created, you can see if you are in an area that already has problems, or areas you may want to avoid if you are drilling a new well,” said Ryan, who is based in the Department of Civil, Environmental and Architectural Engineering.

Arsenic in groundwater can occur naturally, or it can come from human sources like agriculture, where it was used as a pesticide, or mining operations. Ingestion can have short-term effects, including nausea and fatigue, as well as long-term effects like skin thickening and discoloration. Ryan said that more testing was needed, but the source of the higher levels in this case was likely geologic. He added that better understanding of that aspect would be valuable when making decisions about new wells and development needs in those communities.

Ken Nordstrom, the environmental health director for the Delta County Health Department, said that without a healthy drinking water source, you cannot have a healthy community.

“CU Boulder has helped us develop this resource for individual homeowners to ensure that they have a healthy drinking water supply,” he said. 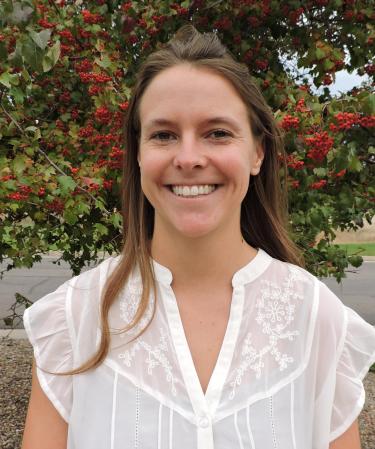 Miller has since gotten a job with the state of Nevada. She also presented her findings from the project at the American Geophysical Union’s 2018 Fall Meeting in Washington, D.C. Since then, other counties have contacted her for advice on setting up similar databases she said.

“Collaborating with Delta County has been a great asset for my professional career. I gained valuable research and outreach skills, which ultimately created the foundation for my current position where I work as the project manager for my program’s geographical information systems database used to map information about abandoned mine-land sites across the state,” she said.

The project is nearing completion, and sample kits have now been sent to approximately 1,000 volunteers. From that group, results have been returned to over 750 of them. Miller said the plan is to update the interactive map by the end of the year, and the Delta County Environmental Health Department staff is planning to survey residents in the counties to identify the impacts this project has had on helping private well owners keep their water safe.

Ryan said this type of work was just as important for students in his lab starting their careers as it is to the communities they are serving.

“This type of work is important because I can bring students into it – but it isn’t just having them take samples and analyzing them. It's a good case where we are getting them into a mode where they are trying to find out the client’s problem and the best way to address it,” he said. “This kind of work provides extra opportunities for students and real benefits to communities we work with.”