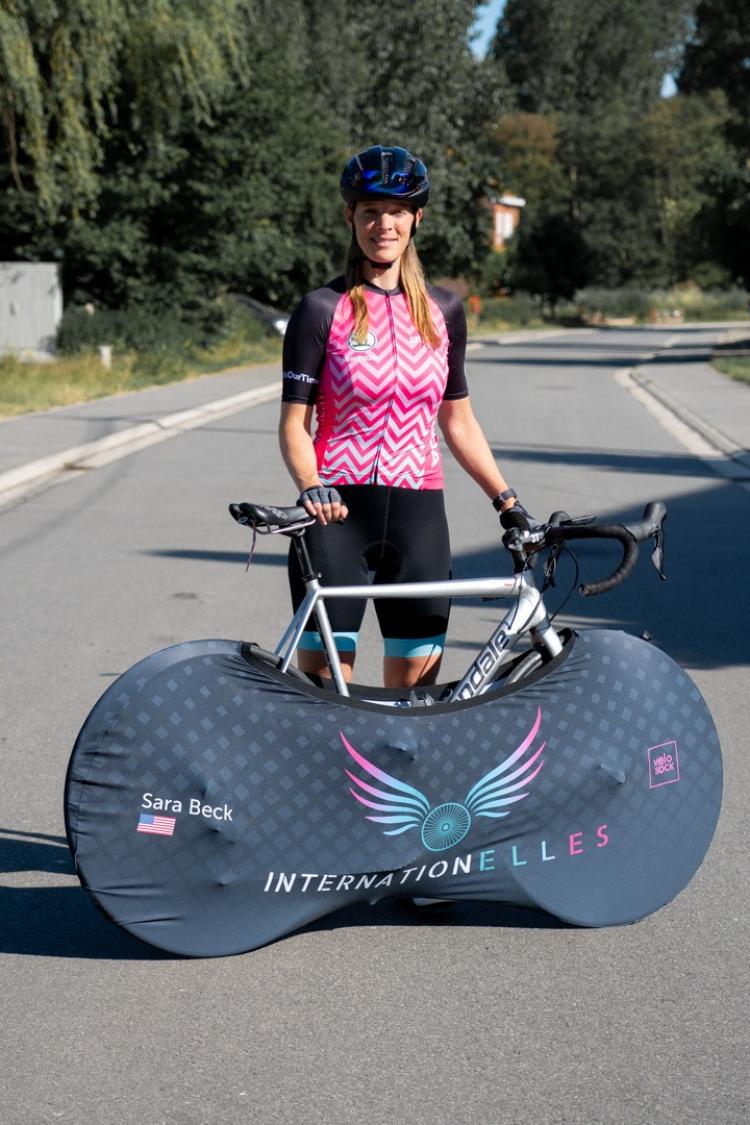 Sara Beck with her bike on the Tour de France route.

Sara Beck finished her undergraduate degrees at CU Boulder in 2003, double majoring in aerospace engineering sciences and studio arts. After an impressive first job at NASA, she returned to the College of Engineering and Applied Science and earned her PhD in environmental engineering under Professor Karl Linden in 2015. We asked her about her impressive experience in engineering so far, her future plans and what it’s like to ride the Tour de France bike race route.

Question: Why did you pick the undergraduate path you did? What was your first job like at NASA?

Answer: I was interested in science, but I also wanted a creative outlet. The only way to take photography and painting classes was to double major, so that's what I did! My emphasis was actually on video production. I loved that you can frame the shots just like in photography, but with the added element of time. I also loved that you can create a completely different story by editing the clips together in a different order.

After graduating, I had the opportunity to work for NASA as a flight controller in the Mission Control Center, just like you see in Apollo 13. I couldn't believe I could have that job straight out of college! In my first position – in robotics – we supported the Space Shuttle program and contributed to assembling the International Space Station. Then, I switched to group that coordinated daily space station operations with the Russian Space Agency, which was really interesting. There's a collective pride at NASA that I have not seen anywhere else, and it was great to be a part of it all.

Q: Why did you decide to come back to study here after getting your master’s degree elsewhere?

A: At NASA, I got very involved in a group called Engineers Without Borders-USA and became aware of and passionate about water issues around the world. I thought we needed more people addressing water problems, so I started taking night classes for a master's degree in environmental engineering from Georgia Tech. I also wanted a chance to do lab work, so I continued on for a PhD. CU was in the top 10 for environmental engineering (and aerospace!), and it was also close to my family and the mountains, so it was a natural decision to move back to Boulder!

Q: Your PhD in environmental engineering was done with Professor Karl Linden as your adviser. What was your research looking into, and what are some applications?

A: My focus is on water disinfection and specifically ultraviolet (UV) disinfection. I'm fascinated by the fact that light can be used for so many purposes: To power a building or a space station, for example, but also to inactivate bacteria or stop the spread of disease. With UV light, you're basically zapping the bacteria and viruses. You are breaking bonds in the DNA and also in proteins, which prevents the microorganisms from reproducing and infecting. I became interested in what was happening at a molecular level and how we could use that to our advantage for water treatment.

One of the cool things with this technology is that it's getting smaller and more efficient. Now, we have UV light from LEDs or tiny chips only 1 square mm in size. LEDs in the visible range have revolutionized electronics, and I think LEDs in the UV range could help revolutionize water disinfection. This is one of the areas I had the chance to research during a Fulbright in Thailand: Can we use LEDs in a small-scale process to reuse wastewater for agriculture? I was inspired by water reuse in the resource-limited environment of space and wanted to investigate reusing water in the resource-limited environment of Earth.

Q: You are finishing your time as a post-doc in Switzerland. Can you give an idea of what you were doing and how it related to your previous work? What was it like to live abroad and work in engineering?

A: In Thailand, we started working with an inexpensive filter from South Africa, which was basically a cheap polyester textile. I wanted to see if this polyester fabric could work as an effective gravity-driven filter for water reuse in middle-income countries. I had the opportunity to continue that study with students in Switzerland. At my research institute, the Swiss Federal Institute of Aquatic Science and Technology, we have access to all kinds of research equipment and knowledge. It has been a unique opportunity to use high-tech equipment to investigate potential low-tech solutions.

Q: You got some media attention recently for riding the Tour de France route with an all-female cycling team. What was that like? Are there lessons you can take from that experience, or biking in general, and apply to engineering?

A: The Tour de France was absolutely amazing and also very intense. We had a team of 10 female cyclists and four crew from three continents, called the InternationElles. Our team met only one or two days before cycling together for the next three weeks! Our goal was to highlight the disparity in cycling and bring awareness to the fact that women are not allowed to compete in the Tour.

I realized that I approach many of my big goals, like the Tour de France, in the same way that I approach my research. It's similar from a logistics perspective: Where are we? Where do we want to be? How do we get from here to there? What tools or resources are available, and what skills do we still need to learn or strengthen? Then, how do we create a timeline or a training plan to make it all happen? 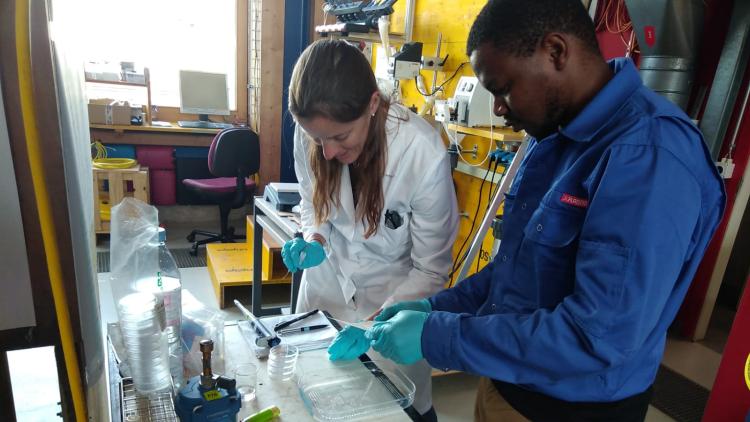 Sara Beck in the lab.

Q: One theme from all your work experience is international collaboration. How did your time here prepare you for that? Is there a common language around engineering?

A: There has definitely been a theme of international collaboration. Solving complex problems with a diverse group of people. This was true at NASA, in research, and with our international team pedaling for gender equality. We are certainly stronger together. My CU engineering classes – both in undergrad and graduate school – always emphasized teamwork and built a strong foundation for that collaboration.

Q: Your time in Switzerland is ending. What’s next for you?

A: Following my passions has led me to some very interesting places around the globe. I'm excited to see what's next!

NRP story on Beck and her Tour de France team

BBC story on Beck and her Tour de France team