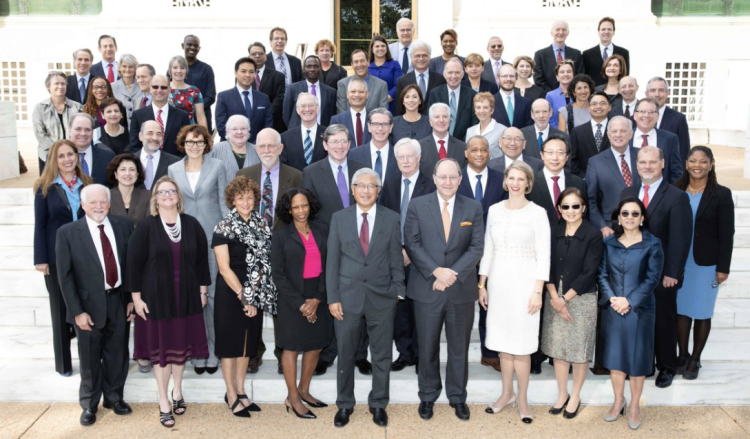 In a ceremony in Washington, D.C. CU Boulder Professor Chris Bowman, bottom right, was officially inducted into the National Academy of Medicine.

In a ceremony in Washington, D.C., this weekend, CU Boulder Professor Chris Bowman was officially inducted into the National Academy of Medicine.

Bowman, a faculty member in the Department of Chemical and Biological Engineering since 1992, is a University of Colorado Distinguished Professor and holds the James and Catherine Patten Endowed Chair. He is also a clinical professor of restorative dentistry in the University of Colorado School of Dental Medicine.

“Chris has served the college in many ways, as an outstanding faculty member, associate dean for research, department chair and leading researcher among other roles,” said Dean Bobby Braun. “This recognition is well deserved and the entire college is proud of Chris for this achievement.”

The ceremony was part of the academy’s Annual Meeting, which also hosted various speakers about the progress in curing cancer and presented other prestigious awards.

Election to the National Academy of Medicine is one of the highest honors in the fields of health and medicine. Bowman said “this induction is particularly special as it is a recognition of how research from our group has improved people’s everyday lives.” The NAM is one of three national academies along with the National Academy of Science and the National Academy of Engineering. They are private, nonprofit institutions that work outside government to provide objective advice on matters of science, technology and health. With the 80 new members inducted this year, the NAM now has more than 2,000 members that have been elected by their peers in recognition of each one’s independent, outstanding achievement.

He is co-director of the Industry/University Cooperative Research Center for Fundamentals and Applications of Photopolymerizations and was the founding Director of the Materials Science and Engineering Program at CU Boulder.

The CU College of Engineering and Applied Science now has 12 members in the National Academies of Sciences, Engineering, and Medicine in all.