The natural world has had billions of years of evolution to perfect systems, creating elegant solutions to tricky problems. CU Boulder Assistant Professor Orit Peleg’s work hopes to illuminate and explore those solutions with the long-term goal of applying the answers she finds to the materials we interact with daily.

Her most recent research with bees, recently published in Nature Physics, is a small step toward that goal. The project looked at the honeybee cluster swarms that hang in cone shapes from tree branches and are made up of hundreds of individual insects clinging to one another. While these swarms are hundreds of times the size of a single organism, the individual bees that comprise it are able to maintain the structure’s stability despite wind and gravity forcing changes in the overall shape.

Peleg, who is based in the Computer Science Department and the BioFrontiers Institute at CU Boulder, conducted the research during her time as a post-doctoral fellow at Harvard in 2017. She said the use of bees for the project “was a bit crazy,” but presented a good opportunity to work more on modeling and testing these types of systems at a low cost and with relatively simple imaging equipment.

“It is a good way to connect experiments to theory and go back and forth until we have a good understanding of the system,” she said.

The project tried to untangle how the cluster stayed together in various conditions by attaching one to a board that was shaken with varying amplitude, frequency and duration. The results showed that horizontally shaken clusters spread out to form wider, flatter cones, adapting to the movement, but also going back to normal given time. Something similar happened with sharp, pendular movements, but measurements before and after showed that the flattened cones deform less and relaxed faster than the elongated ones. Meanwhile, vertical movement put less strain on the structure which, in turn, required less change from the bees to adapt to the motion.

In the end, the experiment confirmed what Peleg’s agent-based simulations predicted and opened up new questions. 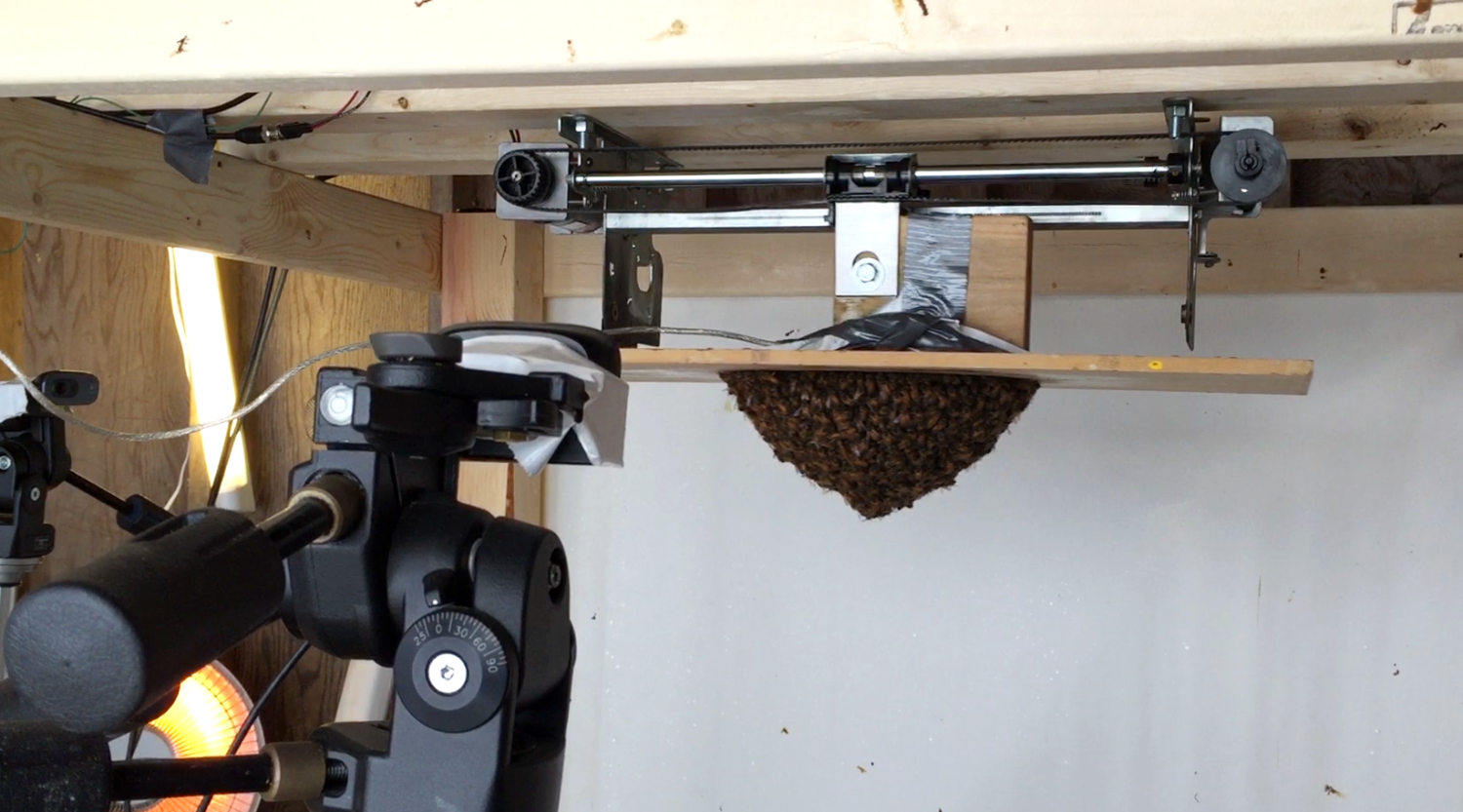 “Our goal in this experiment was to try to pinpoint local rules for behaviors of bees that dictate the mechanical stability of the structure. A bee on one side of swarm can’t say what another bee at the other side of the swarm is doing. It can only say what is happening in its local environment,” Peleg said. “So, by creating this structure, they have to solve this mechanical problem of stability by only using local information.”

But how do they know to do this? Or why? Peleg’s hypothesis is that individual bees respond to the strain they feel during movement, changing their position in the swarm to match it.

“We can think about a local role, where a bee senses those deformations through connections to other bees. If this exceeds a certain threshold, it moves around to address that,” she said. “It doesn’t consider up or down, it just takes the local gradient information. Going up gradient (magnitude) makes it harder for individual bee, but better for the swarm overall.”

Peleg is part of the Multi-functional Materials Interdisciplinary Research Theme at CU and said this work fits well with that theme’s goal of exploring new materials and applications. While there is still more work to be done in studying the fundamental biology at work, she said this research could have applications in swarm robotics or the creation of materials that can sense their environment and respond to it.

“There is a clear connection to structures that insects make like swarms or ant-towers, for example, that are dynamic and respond to things like temperature or mechanical changes,” she said. “The grandiose vison of this, which we are still far away from, is the creation of construction materials that can sense and respond to earthquakes and become more stable in the same sort of way.”

Peleg has an apiary on East Campus and is planning on continuing this kind of work and this project in particular. Specifically, she said there was still work to be done with imaging the inside of the swarms to help with overall understanding of how this process works.

“We still need to look at the internal structure of the swarm through x-rays, for example, as that is completely unknown right now and could be informative,” she said.