NASA iTech has selected CU Boulder as one of the top three teams from a group of 10 finalists for their innovative energy projects and ideas. The 2018 NASA iTech Cycle II Energy is a collaborative effort between NASA and the U.S. Department of Energy’s Advanced Research Projects Agency-Energy (ARPA-E) to find and foster innovative solutions for critical energy challenges on Earth and in space.

Team iFeather is an interdisciplinary project of University of Colorado Boulder Physics Professor Ivan Smalyukh's Soft Matter Physics Smalyukh Research Group. The lab is comprised of a mix of physics and materials science and engineering students.

Their project is a transparant insulating film that can significantly improve energy efficiency. It can be manufactured in-situ, allowing NASA or other organizations to bring a miniature "factory" aboard a space flight and make as much area of the aerogel as needed.

The winners were announced June 14 during an event at Citibank’s headquarters in New York City.

“The iTech Energy competition is the first time we've focused on a more specific topic -- power and energy storage technologies -- and brought DOE in as part of the process," said Therese Griebel, associate administrator for programs for NASA’s Space Technology Mission Directorate (STMD). “The energy focus attracted a large number of interested teams, which made it difficult to get to the top three. We congratulate all of our competitors for getting this far, and we look forward to learning more about the development of their technologies.”

In addition to iFeather, the other two winners are:

“NASA is proud to provide a platform for innovators that exposes them to a cadre of industry experts who will be instrumental in the development of their technologies,” said Kira Blackwell, NASA iTech program executive for STMD. “NASA’s chief technologists and the U.S. Department of Energy’s leading subject matter experts provided the teams with a better understanding of requirements for potential infusion of their technologies within a space environment.”

Judges selected the top three innovations based on criteria including technical viability, the likely impact on future space exploration, benefits to humanity and commercialization potential.

For information about the competition, visit NASA iTech. 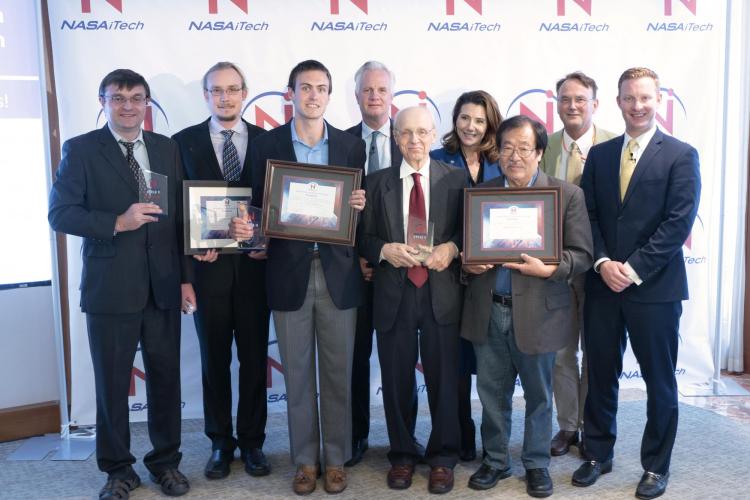 Representatives from each of the three finalist teams. CU Boulder professor Ivan Smalyukh and PhD student Andrew Hess are on the far left.