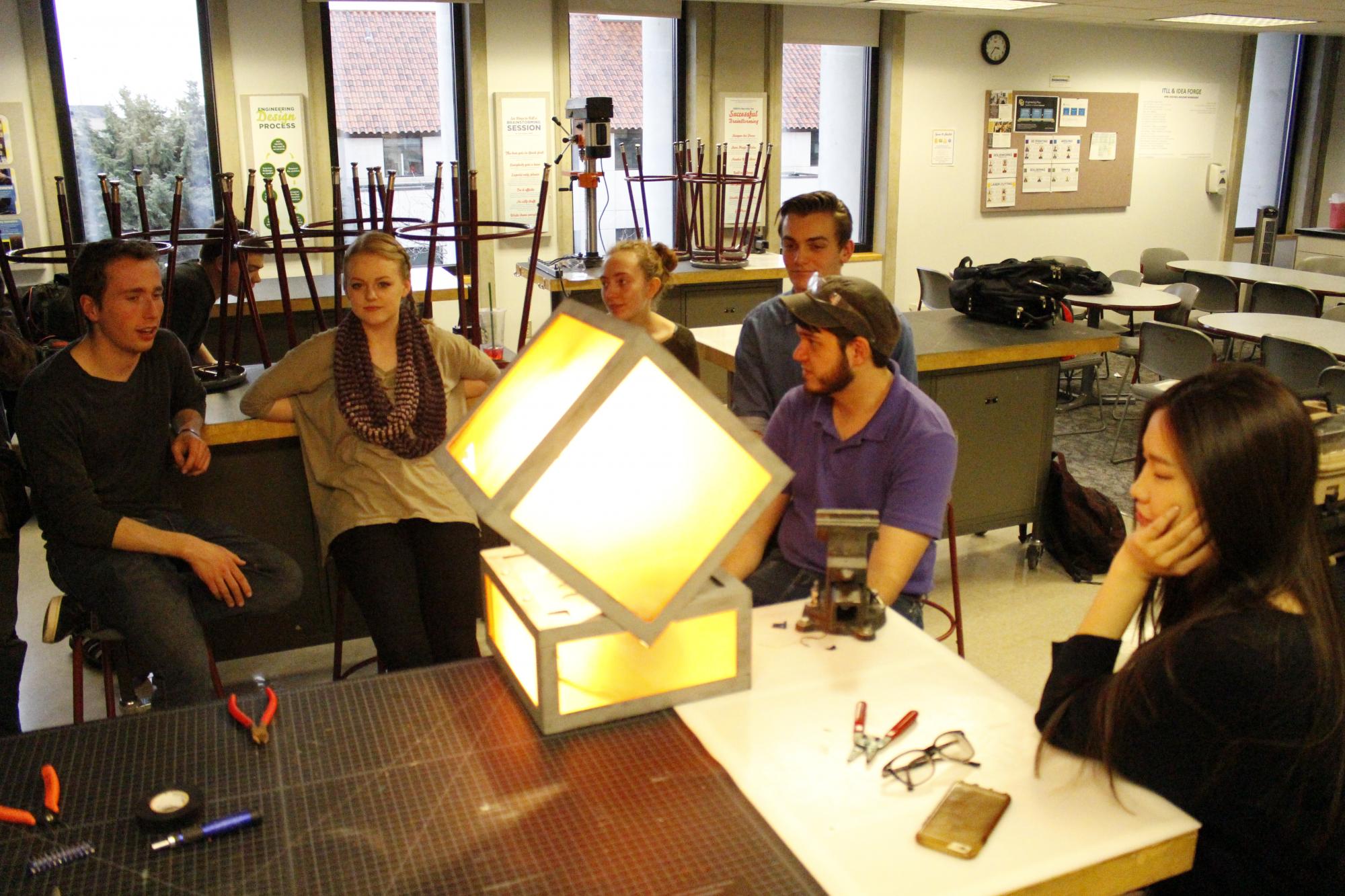 For their first hands-on engineering project, a group of eight freshmen took on a big challenge – take air quality data and help turn it into art.

Their section of the college’s First-Year Engineering Projects class (GEEN 1400) teamed with artist and CU alum Ken Bernstein to make a prototype for a large interactive sculpture he plans, which will make air quality data being collected by INSTAAR and other Colorado agencies more visual.

The five-tower installation will function like an abstracted thermometer for the volatile organic compounds (VOCs) the monitoring system measures. As levels of a particular VOC go up, more panels on the tower light up.

“The data is available to the public, but not in a way that’s meaningful,” said Justin Paige, a mechanical engineering major. “The sculpture will help to make it visual.”

The hardware the group developed is a fully functional proof of concept for the sculpture. They welded the structure that will hold polymer-dispersed LCD panels, which change color as electric currents are passed through them. They also programmed the electronics that will control the panels, writing code that pulls data from the website and sends it to the towers. Finally, they worked to ensure that the towers could withstand changeable Colorado weather.

“We wanted to make something substantial that would actually contribute to (Bernstein’s) project, not just a balsa wood frame or something,” said Henry Kvietok, who is majoring in technology, arts and media. “This is a fully welded and functional prototype.”

Associate Professor Nikolaus Correll, who taught the class, said the process was helpful for both the students and Bernstein.

“While the resulting structure looks a lot like what Ken has originally envisioned, there was some back and forth in the design process where technical constraints influence the aesthetics and the other way around,” Correll said.

Before the students began working on their final project, they spent a lot of time learning about the different facets of engineering involved – taking apart an electronic blood monitoring device to see how it worked, participating in Arduino workshops and learning how to weld.

Both Paige and Kvietok said they’d recommend the First-Year Projects Course, saying it was a learning highlight of their freshman year.

“In the beginning, we never thought we’d be able to do what we’re doing,” Paige said. “Our professor told us to pick something big. He said, ‘You don’t think you’ll be able to do it now, but you’ll get it at the end. The more challenging it is, the more you’ll learn.’”

As an added bonus, the class headed to Germany in May with Correll, who’s originally from Munich, where they toured BMW and Volkswagen plants, as well as the Pinakothek der Moderne modern art museum.

Watch the Team in Action