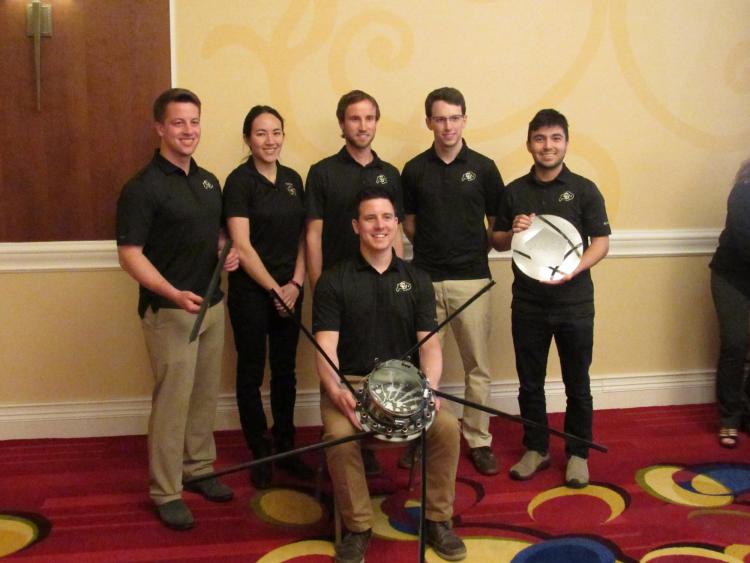 The University of Colorado Boulder team, led by Dr. Kyri Baker, developed an autonomous foldable solar array concept that secured them the runner-up position in this highly competitive challenge. Their approach leveraged extremely lightweight/flexible composite booms that could be wrapped around a centralized hub and then unwound for deployment on the Marian surface. Credits: NASA

The engineering design competition enlists university teams from across the nation to develop creative solutions to some of the agency’s most relevant challenges. Norwich University of Vermont earned first.

In 2017, NASA called for proposals for large power systems that could be used on the surface of Mars. Because these systems need to be in place before humans ever arrive on the Red Planet, teams were required to propose robotic or autonomous solutions for deployment and sustainable operation.

CU Boulder's team, led by Professor Kyri Baker, developed an autonomous foldable solar array concept that secured them the runner-up position. Their project, called MAFSA (Mars Autonomous and Foldable Solar Array) leveraged extremely lightweight/flexible composite booms that could be wrapped around a centralized hub and then unwound for deployment on the Martian surface.

Each of the team's proposed completely different, unique and viable concepts. Students from CU Boulder, Norwich, Princeton University, Texas A&M University, and the University of Virginia presented their concepts to the judges in an intense design review during the 2018 BIG Idea Challenge Forum held March 6 and 7 in Cleveland, Ohio.

“This year’s BIG Idea Challenge brought some fresh and exciting ideas on Mars solar arrays that gives us greater confidence to move forward toward human Mars missions,” said Lee Mason, principal technologist for power and energy storage with NASA’s Space Technology Mission Directorate, and a BIG Idea judge. “The two winning teams provide a nice diversity in their design and operational construct: one focusing on inflatables, the other on composite booms.”

The BIG Idea Challenge is aligned with NASA’s goal to increase the capabilities of the nation’s future workforce through participatory, immersive educational experiences. This includes the challenge prize, which offers NASA internships to members from the winning team.

In a surprise twist during this year’s competition, a new industry collaboration led to even more opportunities for the finalists. Bao Hoang of SSL served as an industry judge, and was so impressed with the quality of work and caliber of students that his company will be making internship offers and possibly job offers to those who participated in the final stage of the challenge.

“It has been an honor for SSL to collaborate with NASA and the NIA in helping to judge the 2018 BIG Idea Challenge,” said Dario Zamarian, group president at SSL, a Maxar Technologies company. “The student teams have developed innovative concepts that reflect exceptional technical capabilities. In support of the program, SSL will invite multiple BIG Idea Challenge participants to join our summer internship program, where they will have the opportunity to work with a leading technology company that brings a commercial mindset to the development of next-generation space infrastructure.”