Deciding to enter the NASA Big Idea Challenge was one of the last things I would have expected to do in the fall 2017. The solicitation came in an email where it was announced NASA was seeking groups of undergraduate and graduate students to submit proposals for the design of an autonomously deployable solar array for Mars. Autonomously deployable arrays had been done before, but none at the scale they were asking.

I had never worked in the aerospace sector, with my electrical engineering focus being primarily on utility and electric vehicle power electronics, but the project sounded cool, completely new, and worth the learning experience if nothing else. The problem was that I had no one in my social vicinity who was interested and I did not know any aerospace engineers who could round out my desired team of five. I then proceeded by setting up an unexpected meeting with Assistant Professor Kyri Baker, who, I had heard, had worked in designing Martian habitat and in-situ resource utilization structures. This was the first of several blind actions I took to form a team.

Luckily, Baker was interested in the project and agreed to take our future team on as an advisor. The next step was to send a slew of emails to professors and department advisors I had never met asking them to forward recruitment emails on to students I had never met. Our efforts produced a resounding single response from our second team member, Clayton Cantrall.

Clayton was completely in from the get go. He mentioned, in our first email exchange, that he had an aerospace engineering colleague who would potentially be interested too. I met with both Clayton and his colleague, resulting in Will Evonosky deciding to come on as our third member. That first meeting took place on Sept. 21. With a due date of Dec. 1 for the 10-page proposal and accompanying two-minute video we realized we had our work cut out for us. We had also decided, in our first meeting, that we would each show up with sketches of potential ideas in our next meeting.

Find out more about MAFSA 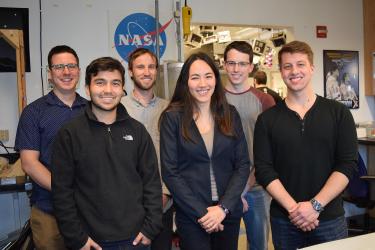 In the next month, the ideas that followed included a flower-like design with circular petals of solar cells deploying from the ends of eight booms, a design with 25 one-centimeter-thick discs hinged to one another that would deploy by rotating each disc out from the previous one, and a slew of other designs. We also brought on our fourth member, Bryce Huber, in that first month.

The four of us then pitched these ideas to a professor who had worked in deployable space structures. He had his reservations and doubts for each design, which was somewhat discouraging due to the time it felt we had wasted just coming up with an overall design. Additionally, we had begun to realize that none of us were well experienced in using CAD software that would be a necessary part of conveying our design to the judges.

What followed was a growing pressure to come up with an idea and to find a final member who was experienced in CAD. One of the benefits of having had so many ideas rejected was that we were learning how to quickly discard new ideas if they were implausible. We finally settled on two ideas, and by some miracle found our fifth member, Eric Robinson, who had the experience to complete most our CAD work.

Once the decision came on which of the two ideas to pursue, with a month left before the deadline, we set off on several weeks of MATLAB, CAD, and analysis to put together our final proposal. The final product exceeded my expectations for what we could accomplish in a month’s time outside of our coursework. Two weeks after the due date we heard back from NASA and were ecstatic to learn that we would be on our way to the Glenn Research Center in Cleveland in March to present our proposed design, MAFSA: Mars Autonomous and Foldable Solar Array, as one of five finalists.

Nick Glascock-Illescas is a first-year electrical engineering graduate student. He earned his bachelor's degree in physics at Claremont McKenna College.