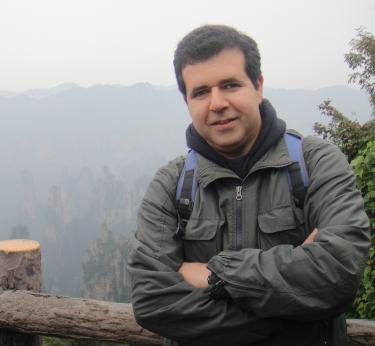 Dr. Mahmoud Hussein’s research transcends a given culture or discipline. An early contributor to the field of phononics, Hussein has helped reshape and expand the landscape of international research in ‘dynamics of materials’.

Hussein provides an overview of phononics and its interdisciplinary roots:

“Phononics resembles electronics and photonics. Electronics and photonics are concerned with the study and manipulation of electrons and light, respectively, while phononics is concerned with the understanding and manipulation of sound. Many researchers from different disciplines were interested in mechanical wave behavior in periodic media, each for their own applications. It became apparent that there was a common denominator between these disciplines. From this commonality, phononics emerged.”

The distinguishing feature of phononics is its focus on the manipulation of vibrations at the material level, as opposed to the structural level. Hussein notes:

“With a [materials level] perspective, you can engineer the internal structure of materials. When you do that, you open the door for a remarkable ability to influence intrinsic material properties for a whole range of applications, from vibration isolation to high resolution ultrasonic sensing.”

A specific material property that Hussein has sought to modify through his phononics research is thermal conductivity. In thermoelectric devices, which convert heat to electricity, or vice versa, the desire is to use materials that are good conductors of electricity but poor conductors of heat—two requirements that tend to be at odds with each other in common materials.  Thus low thermal conductivity materials with good electrical properties are highly sought for in this application.

Traditionally, researchers have aimed to decrease the thermal conductivity by placing physical obstructions, such as holes or particles, within the internal structure of a material in order to hinder the motion of ‘phonons’. While decreasing heat transfer, this approach concurrently decreases electrical conductivity by impairing electron flow, limiting the material’s thermoelectric efficiency.

With assistance from former graduate student Bruce Davis, Hussein has demonstrated the theoretical viability of decreasing a material’s thermal conductivity, while maintaining its electrical conductivity. He determined that placing minuscule pillars on top of a membrane, made from silicon for example, reduces the membrane’s ability to transport heat. These external nanostructures resonate naturally, sending vibrational waves to obscure the motion of the heat carrying waves traveling through the membrane. This atomic-scale coupling mechanism slows the overall heat transfer while in principle preserving the motion of electrons. 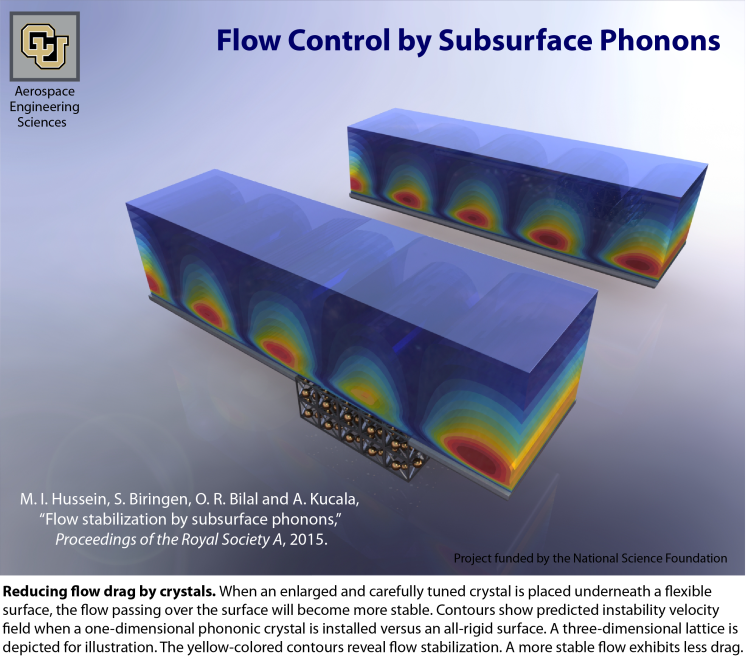 Proof of concept demonstration of phononic subsurfaces. This work appeared in the April 2015 issue of the Proceedings of the Royal Society A.

As noted by a Physics focus article on Hussein’s discovery, “this combination [of properties] is critical to thermoelectric devices, which are used for refrigeration and generating electricity.” Hussein is currently collaborating with scientists from NIST, JILA and the CU physics and mechanical engineering departments in conducting experiments to verify the theory.

In tandem with his thermal conductivity research, Hussein, in collaboration with fellow-AES professor Dr. Sedat Biringen, is investigating the merger of phononics with fluid dynamics for the purpose of controlling fluid flow. He explains:

“The idea is to use phononic crystals and place them underneath a surface that is exposed to a fluid flow. By considering their amplitude and phase behavior, the crystals are designed to interact with the flow and allow it to stabilize or destabilize, depending upon what’s desired. Stabilization would be helpful for skin-friction drag reduction, while destabilization would be helpful for enhanced mixing of chemicals and combustion. Sedat and I, and our students, are now working on applying this concept to the more challenging problem of turbulence control.”

Merely looking at the possible drag reduction application, the global impact of this concept stands to be very significant:

“The technology emerging from this work could be applied to air, sea and land vehicles, as well as wind turbines and long-range pipelines. Drag reduction is an enormously difficult problem to solve. It is very consequential because if you look at the commercial airline industry alone for example, $210 billion a year is spent on fuel consumption. If drag could be decreased by even just a few percent, the economic and environmental impacts would be profound.”

Hussein has not only uncovered bleeding-edge ideas in material physics; he has also prompted the evolution of phononics into an established scientific discipline. 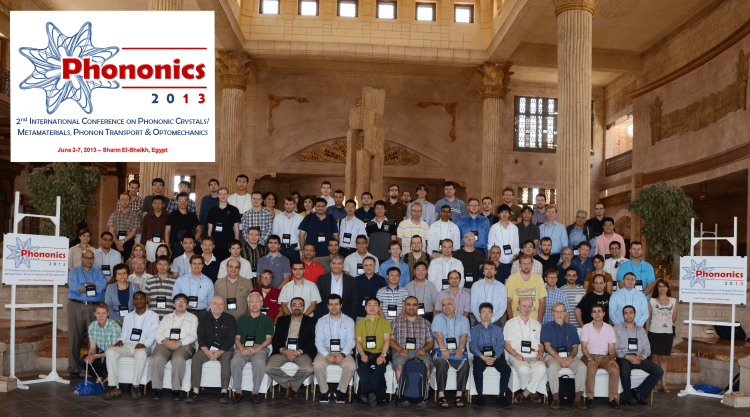 Hussein partnered with Ihab El-Kady of Sandia National Laboratories to start an international conference series on Phononics, the first of which took place in Santa Fe, NM in 2011. Held on a bi-yearly basis, this conference has helped to unify and stimulate the global phononics community and trigger the creation of this new field.

Hussein and El-Kady organized the first two editions, and since then a process has been put in place to continuously transfer the organization to different groups from across the world. The Phononics conference series has already demonstrated a rapid growth rate, ballooning from 124 abstracts to 227 abstracts over the course of three conferences.

Hussein’s personal research background, like the field of phononics, is largely shaped by international influences. He notes:

“I received my education on four different continents. From Kuwait City and Cairo, to London, Ann Arbor and Cambridge, I have found this wide exposure to be enriching not just to my work, but to my life in general. Living and studying in several countries allowed me to meet a diverse range of people and accumulate inspiration–this somehow seems to have fueled my imagination and positively impacts the science and engineering I produce. It allows one to see different ways of doing things and to tap into the best of all worlds.’

Despite his extensive international involvement, Hussein sees the value of being rooted in the Boulder academic and research communities:

“I came [to CU] to start my faculty career. I was impressed by the strength and breadth of research in this region and being close to numerous national labs. It didn’t hurt that I also liked the outdoorish nature of Boulder. Overall, it has been a great environment for my research, and my teaching.”