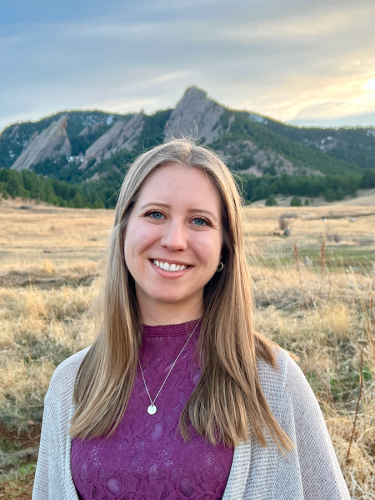 Sarah Luettgen is building a future as an aerospace professional, studying the space domain of satellite orbits in the extreme upper reaches of Earth’s atmosphere.

As a second-year aerospace PhD student and Smead Scholar at the University of Colorado Boulder, Luettgen is leveraging advanced atmospheric models and super computers to study an area of the upper atmosphere from 80-600 km (50-375 miles) in altitude and beyond, where air and other gases dissipate, and space begins.

Many satellites, including the International Space Station, orbit through this range. But even at these high elevations, some atmospheric gases remain and can cause trouble.

“One of the biggest challenges is satellite drag,” Luettgen said. “Atmospheric density can vary by an order of magnitude depending on the conditions at a given moment. If we have a more accurate way to model these changes, it can reduce the uncertainty for operators trying to determine orbital paths.”

Gas levels in the atmosphere can change because of weather conditions on Earth as well as solar storms from the sun – called space weather. It is an area of active research and Luettgen hopes to develop better models to predict spacecraft trajectories more accurately and safely.

The research also has potential to help improve understanding of climate change and explore what makes our planet habitable, she said.

“The issue is we need a fluid model for the lower part of the atmosphere where gases are denser, but as you get higher, things get less dense and there are fewer atmospheric collisions. There it makes more sense to model the motion of individual particles,” Luettgen said.

The effort, sponsored by the NASA Heliophysics Theory, Modeling, and Simulations program in combination with a NASA/FINESST fellowship Luettgen earned last year, aims to create a unified model of both.

This is where the super computers come in. This type of work requires crunching a lot of numbers in parallel to simulate a very large volume of space and its evolution over days, months, or years. Using systems operated and maintained by NASA and the University Corporation for Atmospheric Research, Luettgen is writing code across several computer languages and platforms that will push the limits of atmospheric modeling into new areas.

It is intensive work that just a few years ago would have been impossible.

“I wouldn’t be able to do this research without the computational technologies available today,” Luettgen said. “I feel very lucky. We’re at a point where the coupling of these two models into a single massive simulation is now possible and is the next logical step as computing power and mathematical methods have advanced.”

As she begins the second year of her PhD program, Luettgen is looking forward to how the work will progress. She sees these developed skills as transferable to a career in industry, government, or academia and is keeping the door open for however the future unfolds. For now, however, Luettgen is thoroughly enjoying her research and doctoral program.

“I started thinking about a PhD in second grade,” Luettgen said. “I love school and I’ve always been drawn to physics and math, and I love applying it.”