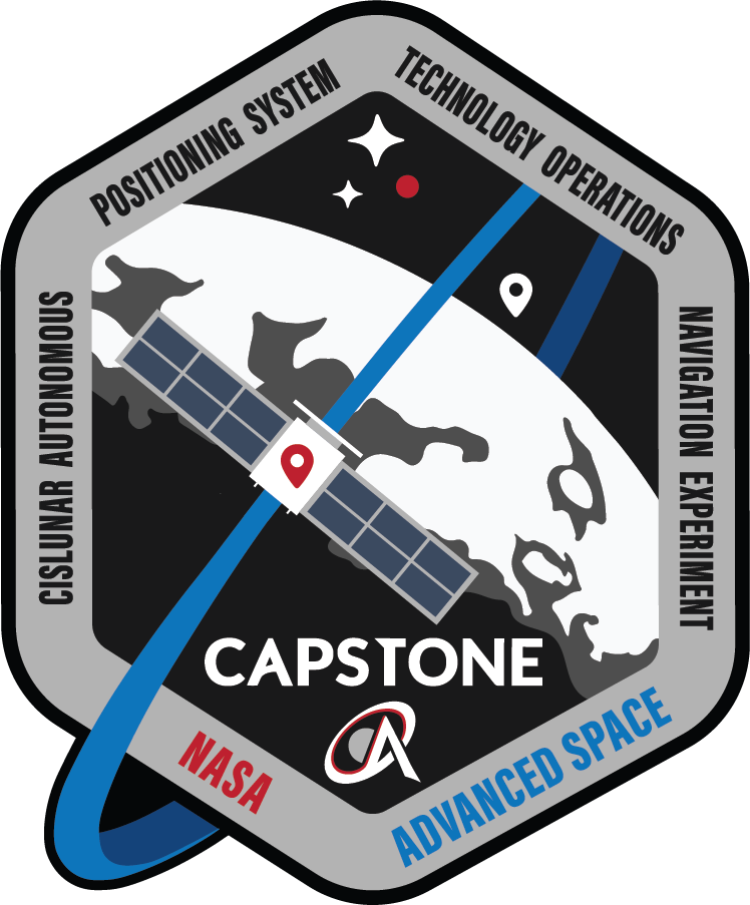 Above: The CAPSTONE mission patch.
Header Image: A rendering of CAPSTONE over the lunar North Pole.

Stationed on the launchpad, its rocket glinting in the noonday sun, CAPSTONE is prepared for an imminent launch and the chance to demonstrate new technology that could prove critical for future exploration of the Moon and beyond.

Advanced Space, a space solutions company co-founded by University of Colorado Boulder graduates, designed it all.

“This is so exciting,” said Bradley Cheetham (AeroEngr MS’11), Advanced Space CEO. “I don’t think in our wildest dreams we could have imagined this. We started in a loft in my condo in Boulder.”

Founded in 2011 by Cheetham and Jeff Parker (AeroEngr MS’03, PhD’07), who serves as its chief technology officer, Advanced Space has since grown to 45 employees. They have long since left Cheetham’s loft, and now work from a two-story headquarters building in a Westminster business park on an array of aerospace projects.

The company’s current focus is on the planned late June launch of CAPSTONE, the Cislunar Autonomous Positioning System Technology Operations and Navigation Experiment.

The satellite is part of NASA’s Artemis program to expand exploration of space.

The 55 pound, microwave oven sized CubeSat will be the first spacecraft to test an unusual, elliptical lunar orbit and to validate peer-to-peer navigation technologies so future Moon-orbiting satellites and landers know their exact positions.

While Earth is ringed by dozens of GPS satellites that can easily pinpoint locations here, constructing a similar array for the Moon could take years and billions of dollars.

That is where CAPSTONE comes in. It is a comparatively small and inexpensive single CubeSat. It uses technology and software that should allow satellites to communicate with each other to determine their locations, without the benefit of dedicated positioning satellites or tracking from Earth.

“My technical team doesn’t like to call it GPS on the Moon, but it is technology we’ve been developing for over seven years to help satellites at the Moon know where they are,” Cheetham said.

The positioning experiments will be performed in concert with NASA’s Lunar Reconnaissance Orbiter, which has been in operation around the Moon since 2009.

NASA also hopes CAPSTONE will validate the use of an elongated orbit that will bring the CubeSat within 1,000 miles of the Moon on its near pass and 43,500 miles at its apex every seven days. Meaning It should require less fuel to access than other, more traditional, circular orbits.

The technology grew out of research started at CU Boulder by the late Professor George Born, who founded the Colorado Center for Astrodynamics Research and made major contributions to satellite orbit determination science. He served as graduate advisor for both Cheetham and Parker.

“We’ll be flying in a near-rectilinear halo orbit. It’s not a lunar orbit, it’s not an Earth orbit. It’s both, which is really efficient from a fuel perspective,” Cheetham said. “George Born had a whole group studying these orbits. His fundamental research allowed us to see what’s possible from an applied perspective. It’s surreal to actually fly the research.”

NASA hopes the orbit will establish a location that is an ideal staging area for future missions to the Moon and beyond.

“My passion is to enable this exciting future, to enable the sustainable exploration and settlement of space.” he said. “This is technology that will help us get there."

The launch, aboard an Electron rocket, is set for late June from the Rocket Lab commercial spaceport in New Zealand.