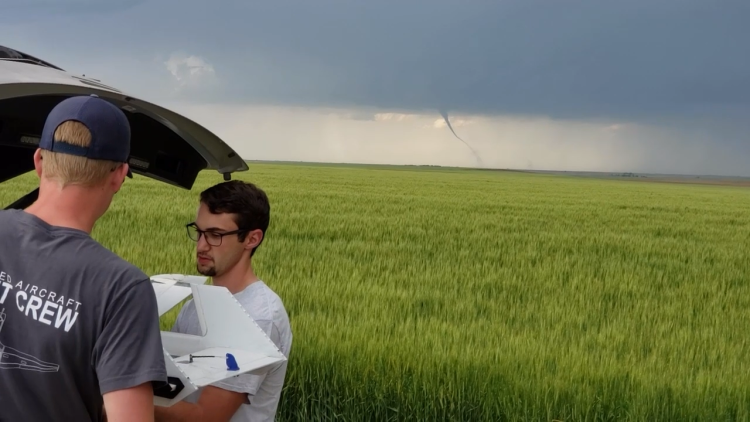 Above: Members of the CU Boulder flight crew working on a RAAVEN drone in 2019 during a mission with a tornado in the distance.
Header: The RAAVEN drone flying near a storm system.

A team of University of Colorado Boulder scientists and engineers have landed a major grant to design next-generation uncrewed aircraft systems (UAS) to fly into the heart of supercell thunderstorms that can spawn tornadoes.

“We’re trying to improve forecasts of severe weather,” said Eric Frew, a professor of aerospace engineering sciences. “There are things you can’t understand without flying into the storm from the air, things ground radar does not tell you.”

Frew’s team has earned a three-year, $1.5 million National Science Foundation grant to get closer than ever before to the heart of supercell storms: by launching probes that can fly directly inside them.

“We’re flying drones at the edge of storms and are being successful, but we can’t pierce the heart of the storm with the drone because the winds and precipitation are too strong,” said Frew, who is the principal investigator of the grant.

The goal of the research is to develop a drone that can fly as close to a storm as possible and then deploy a series of helium balloon probes carrying sensor packages that will be sucked into the center of the storms at altitude and report back data on the conditions inside.

While UASs are often remote controlled by humans on the ground, the goal of this system is for it to work fully autonomously. The UAV will make its own decisions about how close it can safely get to a storm and when it should release the probes, using artificial intelligence to make choices based on quickly changing storm conditions faster than a team of people could.

“The storms that we plan to study are extremely difficult to model, so there is a lot of uncertainty,” Sunberg said. “My role will be to use artificial intelligence to optimize the aircraft's path to deploy the balloons in the places that they will gather the most information about the storm. It is one of the most exciting applications of my artificial intelligence work.”

These systems will eventually be deployed in the field during storm-chasing campaigns. Frew and colleagues at CU Boulder have made numerous multi-week excursions across the Great Plains following supercell storms and flying UAVs to gather data that can be analyzed by scientists to improve weather predictions and early warning systems for tornadoes.

“This has all been part of a 15-year vision of an autonomous airborne scientist. It used to be that being in the field was a barrier to communication. Now we have aircraft that have LTE and access to the internet, which opens us up to cloud computing. It makes for much more capable artificial intelligence,” Frew said. “The aircraft is just one part though. The science gathering is the aircraft, the team, the ground station computer, algorithms in cloud servers. We have the big brain of the internet at our disposal in ways we never did before.”

In addition to Frew and Sunberg, the research also includes Brian Argrow, professor of aerospace engineering sciences at CU Boulder, and Adam Houston of the Department of Earth and Atmospheric Sciences at the University of Nebraska-Lincoln. 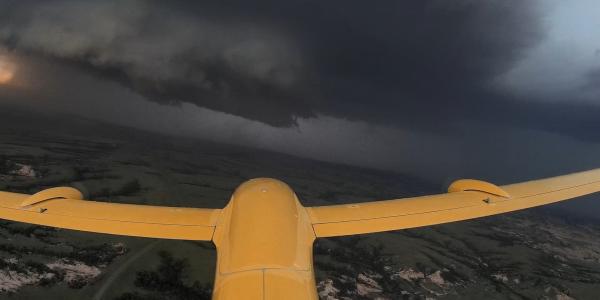 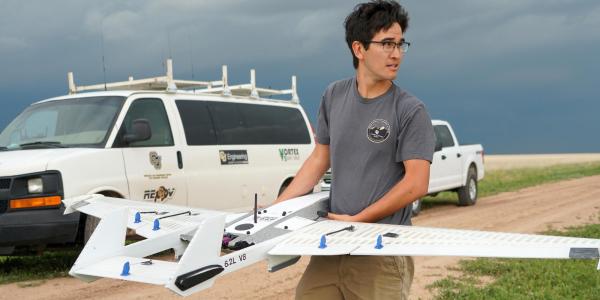 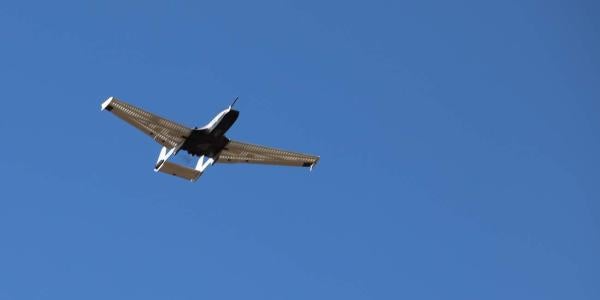 The air up there: CU team deploys multiple drones in tornado study