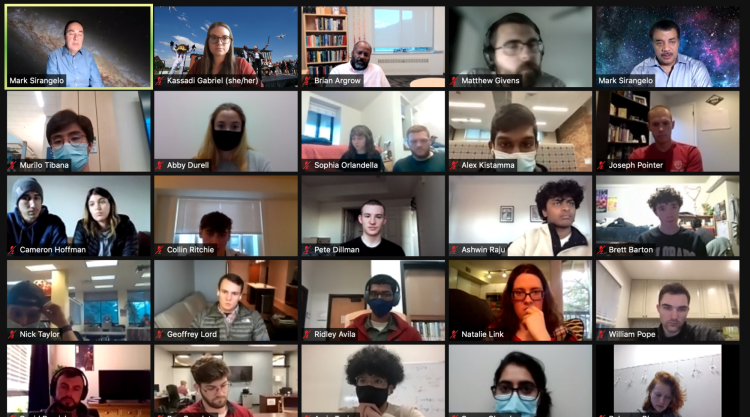 Renowned astrophysicist Neil deGrasse Tyson shared stories from his life and career during a special webinar with the Ann and H.J. Smead Department of Aerospace Engineering Sciences.

Tyson took part in a discussion hosted by Entrepreneur-in-Residence Mark Sirangelo on Wednesday, Nov. 3. The conversation included anecdotes from Tyson’s past, projections on the future of space and physics, and featured a Q&A with student attendees.

“I knew I was interested in the universe from age nine and my first visit to my local planetarium,” Tyson said. “It focused my attention, decisions, the books I would read.”

Growing up, he stuck with science even when faced with teachers who didn’t support his interests.

“They said, ‘Why don’t you join the basketball team?’ They don’t even know the bias dripping in that,” Tyson said.

During the webinar, Tyson challenged attendees to learn as much as they could, and to take harder classes, even if it meant earning a lower grade, as a way to have additional knowledge valuable to employers.

“Learn as deeply as you can how the universe works,” he said. “What matters is what have you done with yourself. What is your knowledge base relative to other people?”

He suggested students review the decadal surveys published by working groups in the National Academies as a way to stay on top of where science and engineering research are likely to be focused in the future.

Tyson is particularly excited about potential new scientific discoveries from the soon-to-launch James Webb Space Telescope, and offered kudos to the engineers who designed and built it.

“I’m a scientist, so we figure out different stuff out from you (as engineers). But you guys have the fun part,” Tyson said. “If you go back 50 years and they were saying how will we ever get big telescopes in space? Then people figured out that you could fold telescopes. In fact this one is hexagonal and the hexagons unfurl.”

In response to a student question about how to balance life and obligations, Tyson acknowledged there are not enough hours in the day to do all he wants.

“Things fall through the cracks and I’m always having to triage. Some things I wanted to study I don’t,” he said.

He discussed concerns about the politicization of science and misinformation in media, and how tribalistic urges inherent in humans often push us into opposing corners even when we agree on many things.

“It’s hard. I’d like to believe that it is not intractable,” Tyson said. “When I grew up there was fighting in Northern Ireland. Catholics are fighting the Protestants? What? Do they have different skin color? No. If Catholics can fight Protestants, then any two people in the world can fight each other for any reason at all.”