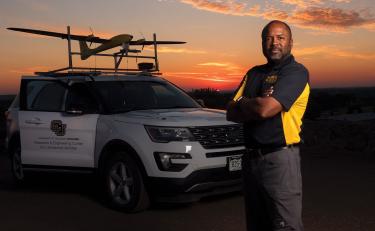 Abstract: In June 2010, the University of Colorado and University of Nebraska collaborated for the first collection of thermodynamic data in a supercell thunderstorm using an unmanned aircraft system (UAS) as part of the “Second Verification of the Origins of Rotation in Tornadoes Experiment” (VORTEX-2). In 2019, the CU-NU UAS team again deployed to the Great Plains with new and improved UAS and storm-intercept strategies for the project “Targeted Observations by Radars and UAS of Supercells” (TORUS). The 2019 TORUS field campaign was highlighted by intercepts of several supercells that produced tornadoes while UAS were sampling the storms.

The TORUS field campaign also provided an opportunity to deploy balloon-borne instruments to begin to characterize how supercells, that can grow above 70,000 feet, generate disturbances in the stratosphere as part of the Hypersonic Flight in the Turbulent Stratosphere (HYFLITS) project. The objectives of HYFLITS research are to measure turbulence and particulates in the stratosphere, and to refine models for the design of hypersonic aircraft. This talk will review the TORUS and HYFLITS campaigns and discuss contributions to severe weather research and efforts to characterize the stratosphere for hypersonic aircraft.

Bio: Brian M. Argrow is Schaden Leadership Professor and Chair of the Ann and H.J. Smead Department of Aerospace Engineering Sciences, and Director of the Integrated Remote & In-Situ Sensing Program (IRISS). His research includes design and deployment of small unmanned aircraft systems, airspace integration, aerodynamics, and high-speed gas dynamics. He is a Fellow of the American Institute for Aeronautics and Astronautics (AIAA); a current member of the Aeronautics and Space Engineering Board of the National Academies of Sciences, Engineering, and Medicine; a current member of the Defense Innovation Board Space Advisory Committee; and he received the Department of the Air Force Exemplary Civilian Service Award for his service on the Air Force Scientific Advisory Board.

All seminars are open to the public.