A Career on the Aerospace Edge 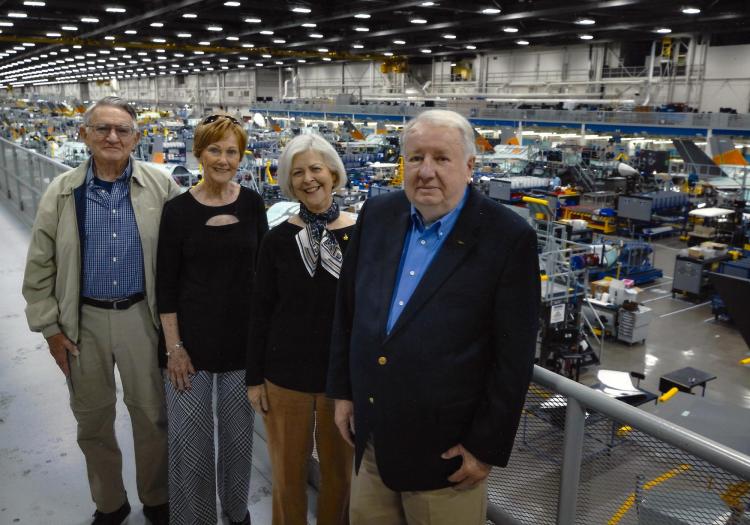 Visiting the Lockheed Martin F35 Plant in October 2019. From left, Bill Hunter, Sue Hunter, Gail Wheaton, and David Wheaton (AeroEngr'62). David was the first F35 Program Manager, a Vice President of Lockheed Martin and the plant manager. Bill and David have been friends for over 70 years.

Bill Hunter (AeroEng’58) has been on the forefront of technology in rocket engines and spacecraft, shipbuilding, starting multiple business and eventually even becoming an artist.

Across a 60-year career, he has been a busy guy.

From the time he was 11 years old, Bill wanted to be a fighter pilot. This led him to CU Boulder.

“The aero school was rated among the very top in the nation and located in God’s country – the west,” he said.

Navy Ships and the Space Race

Bill joined the Navy ROTC, which paid for his education, and after graduation began military service, but his desire to become a fighter pilot was not to happen because of a pesky requirement for 20/20 vision. He pushed forward and made a life-changing decision to become the Chief Engineer of his ship.

After three years, Bill entered industry in the early 1960s to pursue his aerospace dreams. Amid the space race, job offers in the industry were abundant. The research and testing was intense and unprecedented in the effort to establish ICBM capability and land a man on the Moon.

“When we did not have needed technology, we merely scheduled the date we had to have the break through. Failure was not part of the ethos,” Bill said.

Bill ran both rocket engine and space craft programs, managed manned maneuverable spacecraft planning effort for the Air Force and the first hybrid rocket program from design, to test and flight in space.

He eventually found himself in a field seemingly far from the world of aerospace – shipbuilding.

“They wanted someone with naval engineering and aerospace experience. They wanted the assembly techniques for aircraft and spacecraft to use in shipbuilding.”

He led the initial design and study effort for a new class of Navy Destroyers, the first combatant ship to be designed by private industry, and later directed the system engineering effort leading to the construction of 40 of these ships. 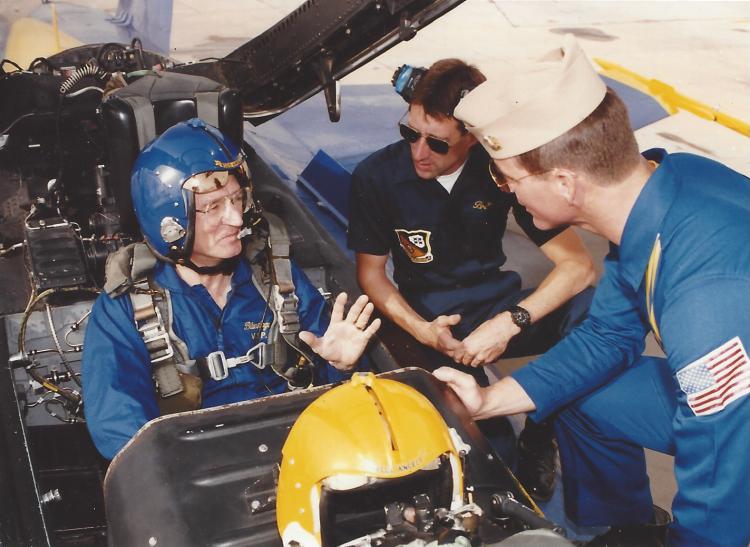 However, the breakneck pace eventually became a challenge to his long term good health.

Bill made the decision to strike out on his own and in the following years, started numerous businesses, some of which adapted aerospace devices for other purposes.

“You come up with something because it’s needed,” he said. “I did work that included heat tube technology from unmanned spacecraft, high speed multiplex security data transmission, infrared temperature sensing for security systems.”

He started an energy business to commercialize a special government solar technology and then won a NASA contract to fund the technology. This was followed with the design, manufacture, and installation of numerous large scale solar heating systems for NASA and the Department of Energy.

In the late 1980’s Bill and his wife Sue, who he had met at CU Boulder, moved to Arizona. It was time for another big change and redirection: partial retirement.

Art in the White House

He decided to back off from technology and to teach himself how to be a bronze sculptor.

His first sculpture took about 8 months of learning and execution. The chosen subject matter was a Marine Corps pilot who lost his life early in WWII. Unsure of where to display it, Bill contacted Senator John McCain for some ideas because McCain had been a Navy fighter pilot.

McCain said he thought then-President Bush should see a photo of the sculpture. 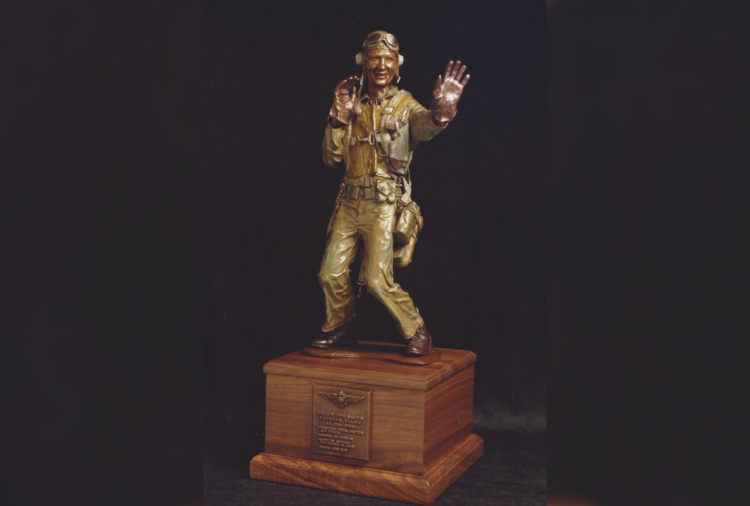 Bill's first bronze sculpture, of Lieutenant Colonel Harold Bauer. Bauer was an inspirational leader of Marine Corps aviation in early WWII. He was killed in action near Guadalcanal on November 14, 1942, and was posthumously awarded the Medal of Honor.

It seemed unlikely anything would come of it.

Two of Bill’s pieces are in Aerospace Building at CU Boulder. A bronze bench is on the first floor grand staircase landing, and a water color painting of Ralphie is in Chair Brian Argrow’s office.

Bill did close the chapter on his desire to become Navy fighter pilot, taking to the skies as a multi-engine rated instrument private pilot. Courtesy of the Secretary of the Navy, he also got to spend a day with the Blue Angels at their winter training facilities with an extended flight in an F-18.

“I got to personally take the F-18 up to the speed of sound, engage the after burner and do rolls and loops with the smoke on,” he said.

He looks at the world of aerospace today and is pleased with the groundbreaking research being done, although research today is more safety conscious than before.

“Safety concerns seem to trump the risks of yesteryear,” Bill said. “But the work in drones, hypersonic propulsions, SCRAM Jets, artificial intelligence—there’s a lot of demand and a lot of competition. It’s exciting to see. I hope we have faith in God, the courage, the fortitude, and the conviction to keep our Republic.” 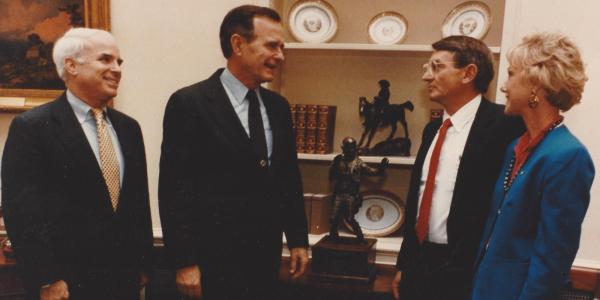 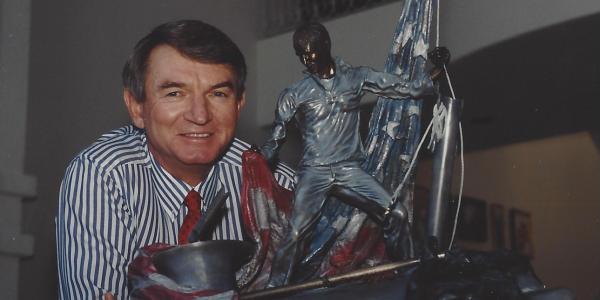 Bill Hunter with a bronze he created sculptured commemorating the heroism of Thomas A. White on the morning of December 7, 1941 when he raised the flag on the USS Arizona after rescuing shipmates. The sculpture is an attraction in the Arizona State Capitol Rotunda. 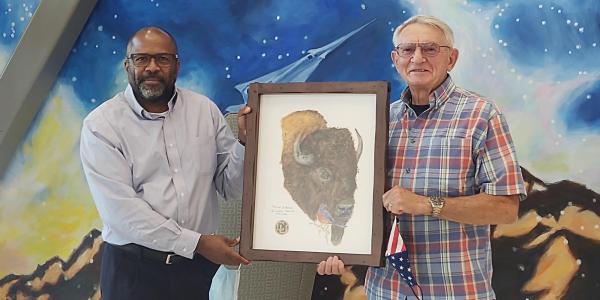 Bill Hunter with Smead Aerospace Chair Brian Argrow after donating a painting of Ralphie in September 2020.