“She will never be able to do this.” – A career of breaking scientific boundaries

“She will never be able to do this.” – A career of breaking scientific boundaries 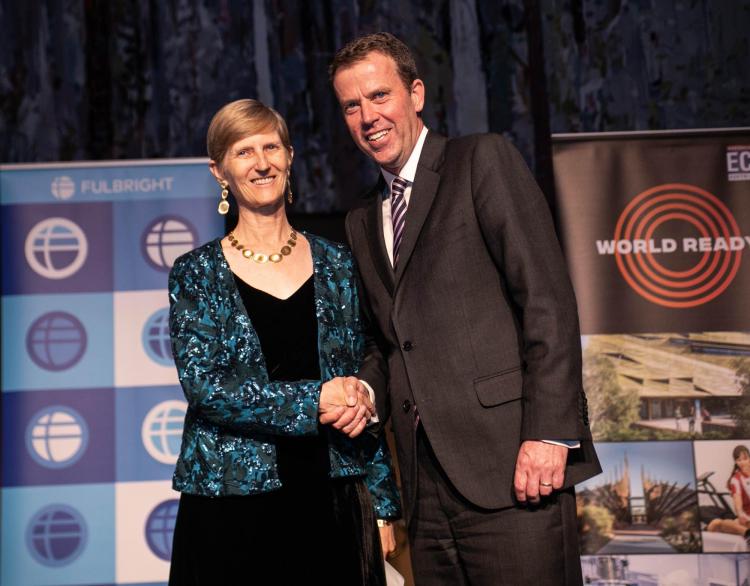 Kristine Larson in Canberra, Australia as part of her 2020 Fulbright Scholar Fellowship.

Kristine Larson looks at GPS differently. Where many see only a wayfinding tool, Larson has stretched and reshaped the technology, inventing methods to use it for everything from measuring Arctic ice sheets to monitoring soil moisture on farms.

A 2019 Scientific American article described the work Larson and other researchers have done with GPS as MacGyver-level adaptions, radically transforming a technology originally created just for calculating location.

Larson’s research has now earned her one of the highest awards a scientist can receive: induction into the National Academy of Sciences.

“Kristine’s curiosity and dedication have allowed her to expand the capabilities of GPS and shed new light on the world around us,” said Keith Molenaar, interim dean of the College of Engineering and Applied Science. “It’s fitting that her innovative vision is being recognized with this tremendous honor.”

It is a big shift from the beginning of Larson’s career in the 1980s, when GPS was little-known to the public and a single receiver cost $150,000.

"When I started, no one had heard of GPS. I couldn't tell my family what I did," Larson said.

Her work began in the field of plate tectonics, where GPS offered exciting new ways to provide hard data to confirm movement of Earth’s continents.

"I was living in California, and California is split by a tectonic plate boundary," Larson said. “When I went to grad school we were told, ‘Here’s the way plate tectonics works,’ and they would show us a picture, but they didn't have any measurements. GPS was a way to validate all of that, but it was brand new. We had to develop software models to measure that motion, and were learning at the same time as our professors."

In 1990, she earned her PhD and came to the University of Colorado Boulder’s Department of Aerospace Engineering Sciences as an assistant professor. As her initial work in GPS matured, Larson began to look for ways to stretch it in new directions.

"When I started, we were content to measure plate tectonics, which is about one inch of movement per year unless there's an earthquake," Larson said. "Then I started to stumble onto other things that looked interesting to me."

First her research group measured the rapid ground motions caused by the great Denali earthquake of 2002. She also worked to measure ice sheet speeds with a team of CU Boulder researchers, including Waleed Abdalati, who is now director of the Cooperative Institute for Research in Environmental Sciences. They set up GPS receivers in western Greenland with the goal of making the first ice sheet measurements through the winter.

In analyzing these new data, her group discovered problems. While most of the satellite signal arrived normally, some signals were reflecting off the ice before being received.  The reflected signal looked a bit like an echo.

"My group spent at least five years on the Denali and Greenland datasets working to get rid of those bounces, and we did, but in the process we realized we should turn the problem upside down. What if we used those bounces for something positive instead?" Larson said. "Could we use the delay in the echoes to measure if it has snowed recently in Greenland? Could we measure the amount of moisture in soil by the bounce? What about vegetation?"

It was an entirely new way to look at GPS data.

“She showed me the initial data early on, and what she was hypothesizing seemed plausible. She had the GPS expertise to know that she was looking at some geophysical phenomenon. It really was a clear example of the phrase, ‘One person’s noise is another person’s signal,’” said Abdalati. “Here something that we sought to remove from the signal actually contained important geophysical information.”

It took time to gain acceptance in the wider scientific community.

“I submitted a grant proposal to measure soil moisture with GPS for farmers and climate scientists and one of the grant reviewers wrote a note that said, ‘She will never be able to do this. Don't fund it,’” Larson said. “Well, we did it.”

"GPS Can't Do That, Can It?"
Larson delivers the 113th University of Colorado Boulder
Distinguished Research Lectureship.

Larson’s ideas gradually gained traction, and today, there is an entire community of researchers using the noise on GPS signals in novel ways. Larson is now working to bring that analysis to the masses. She recently developed a publicly accessible web app to analyze GPS reflection data in real-time.

"I taught myself how to make a web app by watching YouTube videos. It was a challenge from my son, who is a computer science major. I had to learn three new programming languages to do it, but it was so much fun," Larson said.

She is in the middle of a Fulbright Fellowship with researchers in Australia. She had planned to spend much of 2020 based in Tasmania, but the coronavirus pandemic meant she returned to Boulder earlier than originally planned. Nevertheless, she is still working with her new colleagues remotely.

"With the group in Tasmania I’m working on data collected in Antarctica to measure snow accumulation; we’re also looking at expanding their tide gauge network by using reflected GPS signals. With government scientists in Canberra we are using new cloud-based analysis strategies to measure soil moisture network across Australia," Larson said. "It's one thing to write papers, but it's completely different and really exciting to think people around the world are deploying your ideas."

Larson is the first GPS researcher to be inducted into the National Academy of Sciences and said she sees the induction as a recognition not just of her work but GPS science as a whole.

“It was an unexpected and welcome acknowledgement of the research ideas that I pursued because they were fun and interesting. It's also a recognition of GPS and its importance,” Larson said. “Thirty years ago, no one in the National Academy was talking about GPS. A lot has changed.”