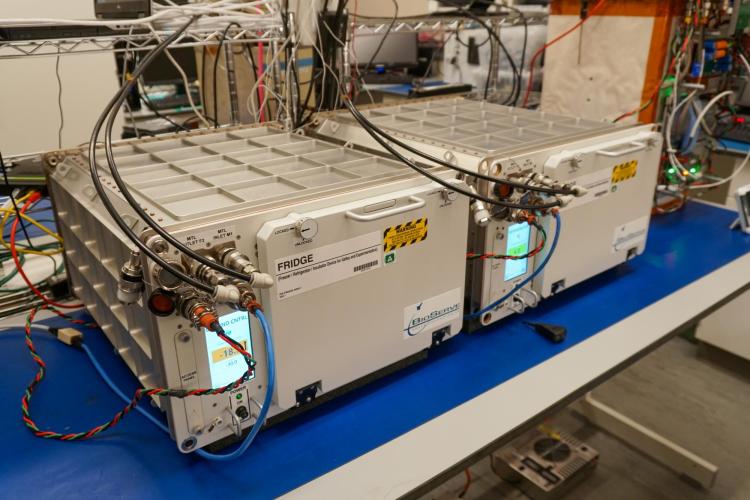 Two FRIDGE units on a workbench at BioServe Space Technologies.

Astronaut ice cream, the crunchy, freeze-dried, pale imitation of the real thing may have met its match – the International Space Station is getting a real freezer.

BioServe Space Technologies at the University of Colorado Boulder is designing and building a space-rated refrigerator for astronauts to store experiments and, more importantly, tasty food treats from home.

“The main food for astronauts right now is mostly freeze-dried or dehydrated. The benefit is it is shelf-stable for years. Refrigeration is fairly new in space, and it's really a plus for nutrition for astronauts,” said Tobias Niederwieser, a BioServe research associate leading the project.

Officially called the Freezer Refrigerator Incubator Device for Galley and Experimentation, or FRIDGE, it is a far cry from the Amana or Frigidaire in your kitchen. Standard electronics don't fare well in space for a litany of reasons, with the fierce vibrations of launch and the higher radiation levels experienced once in orbit being primary culprits, so BioServe is designing specialized units.

“There are no rotating parts, no fans, which is really big for reliability,” said Robby Aaron, an aerospace master’s student working on the project. “A normal fridge on Earth is also hot in the back. We can’t have that in space. Warm air doesn't rise in microgravity; it stays stationary and can cause things to overheat, so you must get rid of heat some other way. ISS has a water-cooling system we’ll be tapped into to directly dump the waste heat and keep the system cool.”

Compared to a regular refrigerator, FRIDGE is much smaller, roughly the size of a microwave oven, a requirement so it can fit into the pre-existing connections and rack housings aboard the space station. 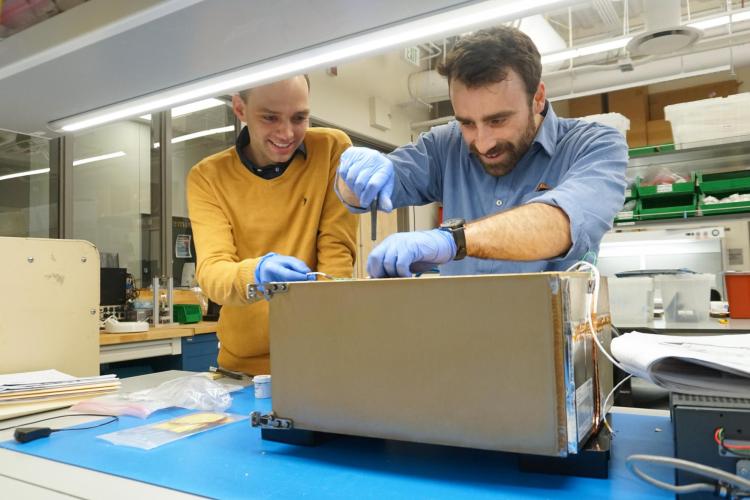 Niederwieser and Aaron working on one of the FRIDGE units.

NASA has ordered eight FRIDGE units. Two will be used for astronaut food, and the remaining six will serve as home for active experiments that are temperature sensitive, or as storage for experiments either right before or after rocket transport to and from the ISS or aboard the station while awaiting active research.

The first two units are scheduled for delivery to NASA this summer, with a planned launch on the NG-14 resupply mission on September 7.

The FRIDGE units have temperature settings of -15° to 48°C (5.0° to 118.4°F). Why such a broad range? FRIDGE is an adaptation of BioServe’s pre-existing space incubator, SABL, the Space Automated Bioproduct Lab. Three of these units have been operated continuously onboard the ISS since early 2016 and have thus far supported over 30 cell cultures and other biological experiments. The team improved the design to work for an broader temperature range, enabling the new unit to reliably maintain any set point between freezing and incubation temperatures.

“Having SABL operational, on orbit, continuously for four years without any repairs we think was a big selling point for NASA looking at this proposal,” Niederwieser said. “This is proven technology. When something's in space, it has to work.”

The future of rocky road depends on it.